Underlining that it was the country’s programme and not his or his government’s, the Prime Minister said this was an “unique opportunity” to showcase India’s strengths to the entire world. 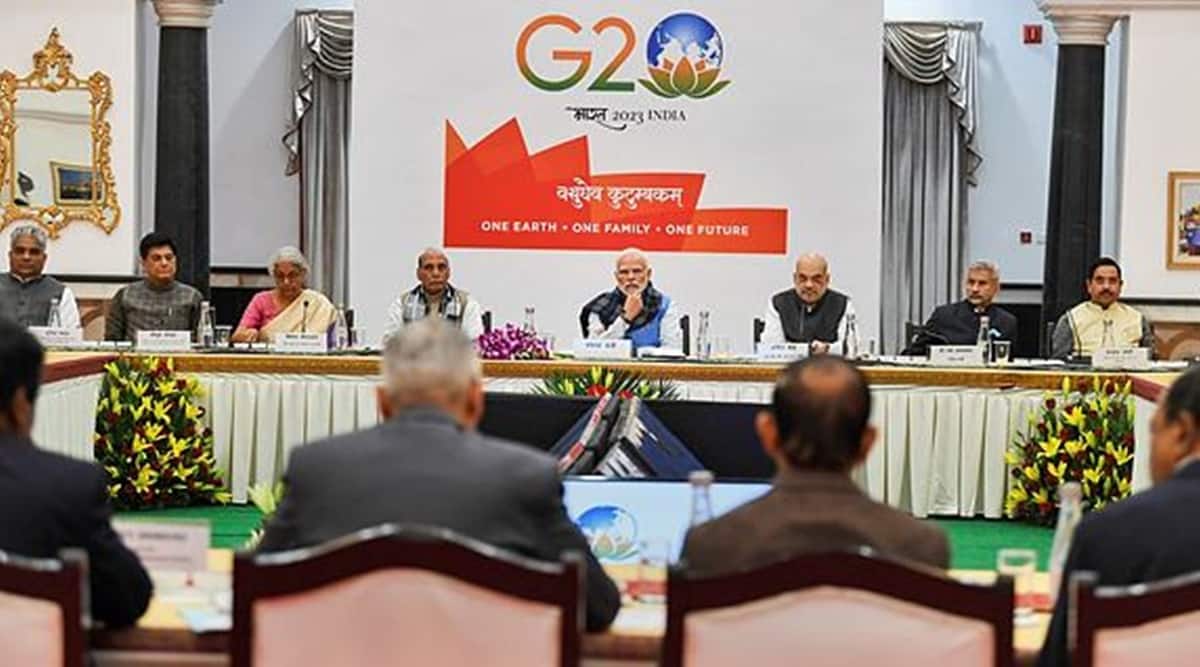 Prime Minister Narendra Modi reached out to the political class Monday, seeking cooperation from leaders of parties and urging them to come together to make India’s G20 presidency a big success.

Underlining that it was the country’s programme and not his or his government’s, the Prime Minister said this was an “unique opportunity” to showcase India’s strengths to the entire world.

At a meeting of the heads of major political parties, the government briefed them on the events it was planning to organise to showcase India to the world.

At the all-party meeting In New Delhi on Monday. (PTI)

Sitharaman gave a brief overview after Shah’s opening remarks. Foreign Secretary Vinay Mohan Kwatra gave a powerpoint presentation on the meetings, programmes and cultural events that the government is planning to organise leading up to the marquee summit of G20 leaders in New Delhi in September next year.

At least three leaders – Congress president Mallikarjun Kharge, CPM’s Sitaram Yechury and CPI’s D Raja – are learnt to have pointed out that India taking over the G20 presidency was by rotation, implying that it should not be projected as the BJP government’s achievement.

Kharge, it is learnt, said it was a matter of pride that India had got the G20 presidency but recalled that the country had hosted the Non-Aligned Movement summit and Commonwealth Heads of Government Meeting (CHOGM) in 1983 ,underscoring that it was not the first time India was getting such an opportunity.

A statement by the Ministry of External Affairs said the “Prime Minister stated that India’s G20 Presidency belongs to the entire nation, and is a unique opportunity to showcase India’s strengths to the entire world.”

The Prime Minister, it said, also pointed out that there is global curiosity and attraction towards India today, which further increases the potential of India’s G20 Presidency.

“The Prime Minister emphasised the importance of teamwork, and sought the cooperation of all leaders in the organisation of various G20 events. He pointed out that the G20 Presidency would help showcase parts of India beyond the conventional big metros, thus bringing out the uniqueness of each part of our nation,” it said.

The Prime Minister also spoke about the “large number of visitors” who would be coming to India during India’s G20 Presidency, underlining the “potential for promoting tourism and boosting the local economies of the venues where G20 meetings would be organised.”

According to sources, Kharge said the government should also highlight the developmental strides made by India over the last 75 years in its presentations to G20 delegates. He recalled the “decisive” role played by India under Prime Minister Manmohan Singh in showing the world the way forward in the aftermath of the 2008 financial meltdown. He pointed out that former US President Barack Obama had praised the role played by Singh some years ago.

Noting that several developing countries are facing a debt crisis, Kharge expressed the hope that India will utilise the G20 presidency to lead the world in helping the countries come out of the crisis like it did in 2008-09. He asked Prime Minister Modi to use his influence and leverage the opportunity for the country’s benefit and rally other countries to mount pressure on China to stop carrying out incursions at the border.

He also gave several suggestions – he asked the Prime Minister to use the opportunity to secure a permanent membership in UN Security Council, leverage India’s presidency to nudge rich and industrialised nations to come good on their promise to pay developing countries for loss and damage caused by global warming, mount pressure on the US to ease the long appointment waiting times periods for B1/B2 business and tourism visas and seek support of other nations to act against countries providing support to terrorism.

Almost all the Chief Ministers, sources said, said that India assuming the G20 presidency was a matter of great pride for the country.

Tamil Nadu Chief Minister M K Stalin said, “This is a matter of great pride to our country and we have a very important role to play in promoting international understanding. India is keenly observed by, not just G20 countries, but all countries around the globe. I strongly believe our Prime Minister will use this opportunity to promote the values of peace, non-violence, harmony, equality and equal justice all over the world.”

Referring to Prime Minister Modi’s announcement that the domestic political campaign programme would be around the theme ‘One Earth-One Family-One Future’ and that India’s G20 Presidency will work to promote the universal sense of oneness, Yechury said “the credibility of the theme announced by the PM is crucially dependent upon creating a society and a political structure which is based on equality for all as the Constitution of India declares ‘irrespective of caste, creed or sex’.”

“It is premised on the delivery of justice, social, political and economic, to all citizens. The current alarming levels of communal polarisation based on vicious campaigns of hate, terror and violence destroy the foundations of the declaration announced by the PM.”