This is the only pan-India study on the topic, and institutions have submitted their findings to ICMR. 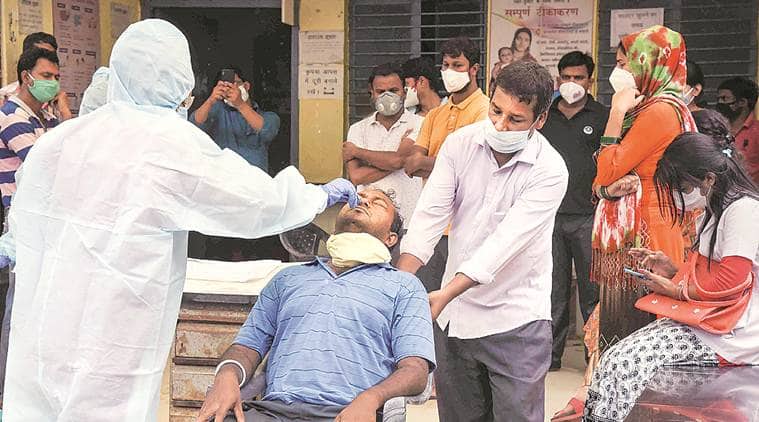 Health workers conduct tests at a camp in Patna on Tuesday. (PTI)

Most institutions which took part in the Indian Council of Medical Research’s (ICMR) trial on plasma therapy have found blood transfusion from recovered Covid-19 patients to those with moderately severe illness to be effective.

This is the only pan-India study on the topic,and institutions have submitted their findings to ICMR.

Out of 52 institutions participating in the ICMR PLACID trial, The Indian Express spoke with principal investigators of 36 institutions, of whom 24 said plasma therapy was effective.

Five of the enrolled institutions were not able to find enough donors or participants. Three institutions said they doubt effectiveness of plasma therapy.

The optimistic investigators, however, caution that timing of the transfusion will be challenging. Half of the 24 who cited positive results said the therapy should not be used on patients who have become severe.

They said antibodies must come from recovered people who were symptomatic, which can take as long as a month after their diagnosis to appear. Patients must receive the plasma within five to 10 days of their diagnosis, the trial’s principal investigators recommended.

If implemented at the right time, the investigators most often cited a decrease in hospital stay time, viral load, oxygen requirements, and time till a negative test result. At least one doctor noted that the plasma must be fresh, and several doctors maintained that the next challenge will be finding donors who have had a symptomatic illness and enough antibodies detected.

As part of the therapy, plasma from a recovered patient is infused into a patient so that the antibodies can induce a “passive immunity” — as opposed to “active immunity” of a vaccine.

In all, 452 patients were enrolled for the trial. One of the largest enrollments came from Madras Medical College, where 24 patients and 24 controls (those who were not administered plasma) were enrolled in the ICMR trial. Eighty-five per cent of the intervention group recovered, as compared to 60 per cent in the control group, said a leading investigator of the medical college.

“It is useless if you use plasma blindly; selection of cases is most important,” he said.

He gave the example of patients whose oxygen saturation had just dipped below 90 and required 10 to 12 litres of oxygen. Once given plasma, the saturation went back to 90 within a day and oxygen requirement decreased to 2 litres.

On June 30, the Health Ministry approved convalescent plasma therapy as off-label (unofficial approval) clinical treatment in patients with moderate disease whose oxygen requirements are progressively increasing despite the use of steroids. Still an experimental therapy for Covid-19, “convalescent plasma therapy” has been used for decades in previous pandemics such as SARS and MERS.

The therapy has received significant government pushes in the past month. Health Minister Harsh Vardhan launched a plasma donation campaign on Sunday at AIIMS-Delhi; Delhi Health Minister Satyendar Jain has credited his recovery to the therapy; and several plasma banks have cropped up countrywide.

Another large patient enrollment in the PLACID trial was from RCSM Government Medical College and CPR Hospital in Kolhapur, Maharashtra. Of 25 mild and moderate patients given plasma, 85 per cent tested negative three days after the transfusion and their hospital time was on average 11 days, compared to 16 for those in controls.

“We also observed the therapy on our own in five severe patients who did not show any difference in outcome,” Dr Varun Ashok Bafna said.

“I had corona and am in the process of donating plasma. It is not a therapy that will become the gold standard in the coming days but it will be a bridge to stabilise patients,” said Dr Satyam Arora of Noida’s Super Specialty Paediatric Hospital and Teaching Institute, which transfused five patients with plasma for the ICMR study and two patients outside of the trial. All seven have recovered.

“We should see the pan-India data but in our institution, we did see some benefit — in when they tested negative, when they shifted to ICU, and when they were discharged, as compared to the controls,” Dr Arora said.

Dr Ravi Dosi of Indore’s Sri Aurobindo Institute has given plasma therapy to more than 90 patients suffering mild and moderate infection and saw 80 per cent of them feel symptomatically better in around four days, as compared to the average 10 days. It took roughly four days for benefits to show in radiological scans, and the recovery percentage was higher in their intervention group, he said.

However, several doctors cautioned against pushing for plasma in severe patients.

“Whatever transfusions we have conducted has been promising. But it should not be given to critical patients. There has been unnecessary panic in attendants to get plasma for critical patients in private hospitals,” said Faridabad ESIC Medical College’s Dr Nimisha Sharma, who enrolled 10 mild and moderate patients in the ICMR trial.

She said patients with plasma saw their viral load decrease and did not require oxygen on the third day, rather than after one week.

At AIIMS-Patna, where four patients in the trial saw “optimistic results”, Dr. Neha Singh said every patient on ventilator is demanding plasma, but “it has been very difficult to find appropriate donors”.

Dr C H Shirnivasa Rao of Hyderabad’s ESIC Medical College said efficacy of plasma will increase as more effective antibody test kits come into the market to detect antibody levels and types in donors. “It is taking up to 28 days for antibodies to show in patients. So the basic problem will be finding plasma with antibodies. Now at least we are getting better antibody kits to trace these donors.”

Three principal investigators said there was no major difference in recovery between cases and controls, while two said plasma given to severe patients saw negative results.

“It is all business,” said Dr Archana Bajpayee of AIIMS-Jodhpur, who enrolled six interventions and six controls in the trial. “Even mild cases with plasma progressed to severe and some even expired. The corporate sector is cashing in on this therapy.”

Dr Vrushali Khadke of Poona Hospital and Research Centre said: “Most mild patients recover on their own anyway. Plasma’s effectiveness is all conjecture.”

Dr Pankaj Malhotra of PGIMER, Chandigarh, enrolled 10 cases and controls and saw usefulness if infused in the first seven to 10 days. “I have this sense that plasma has been given such a media hype that I see a placebo effect in patients as well,” he said. “Nobody has tested this and I cannot prove it, of course. But once you tell them they will receive plasma, they have heard in the media that they will recover quickly and you can see the difference.

PSEB class 12 results: Among the 99 percenters, a newly married 18-year-old, a factory worker’s son who lost his father