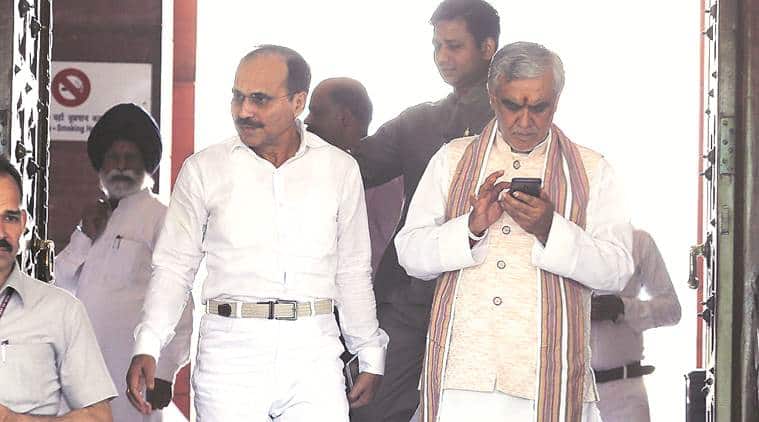 The discussion on the Motion of Thanks to the President’s Address witnessed a war of words between the ruling BJP and the Opposition in Lok Sabha on Monday.

Initiating the discussion on behalf of the government, Sarangi said “criticising Modi is like hitting one’s head against the Himalayas” and took a dig at the Opposition for allegedly seeking proof of Balakot air strikes.

With the Prime Minister present in the House, Sarangi said the Opposition should respect people’s mandate for a man with a humble background and against dynasty.

The Balasore MP switched from English to Hindi and to Sanskrit, Odiya and Bengali, and also took to singing at times. He recited Sanskrit shlokas, couplets from Ramcharitmanas of Tulsidas and Odia poetry, prompting Saugata Roy of Trinamool Congress to ask Speaker Om Birla if he was following what the minister was saying. 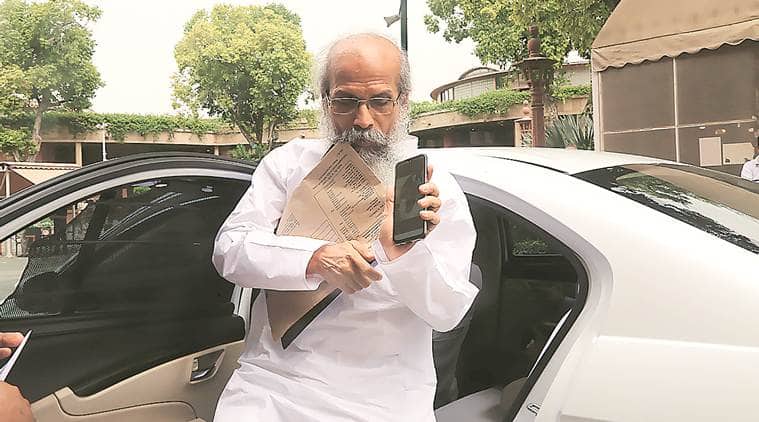 Minister of State Pratap Chandra Sarangi at the complex on Monday. (Express photo by Renuka Puri)

Sarangi also compared “one Narendra (Modi)” with another “Narendra (Swami Vivekananda)”, drawing loud protests from Congress and Trinamool MPs. Chowdhury said something in retort, which was later expunged by the Speaker from the record.

Making a pitch for nationalism, Sarangi wondered if those who did not “believe in Vande Mataram” and raised slogans like “Pakistan zindabad” and “Afzal Guru zindabad” had any right to live in India. The “tukde-tukde gang”, he said, will not be tolerated.

The Congress, he said, gave the country “an accidental prime minister” and a rule of “policy paralysis” and “corruption”.

It was left to Modi to provide a strong leadership and end the policy paralysis, he said, adding that the Prime Minister earned global respect for India, targeted terrorists based in Pakistan and took measures for the poor.

He also expressed his gratitude to Modi for having made a poor man like him a minister. He said the government was committed to the welfare of the poor and by 2022, every poor person will have a “pucca” house with toilet.

In his response, Congress’s Chowdhury said Sarangi “crossed all limits” in his praise for Modi. This prompted many in treasury benches to refer to the “India is Indira and Indira is India” comment when Indira Gandhi was the prime minister.

Chowdhury said the BJP had returned to power because Modi was a “very big salesman” and the Congress failed to “market its products” in the Lok Sabha polls.

Hitting back after Sarangi referred to the alleged irregularities in the sale of 2G spectrum and coal block allocations, he said if there was a wrongdoing, why are UPA chairperson Sonia Gandhi and Congress president Rahul Gandhi not in jail.

Chowdhury accused the government of “political plagiarism” syndrome, saying it claims achievements for everything and ignores the foundation laid down by the Congress.

Invoking former Prime Ministers Jawaharlal Nehru, Indira Gandhi and Rajiv Gandhi, Chowdhury listed out the achievements under Congress governments and accused BJP of just renaming 19 of the 23 schemes of the Congress.

Saugata Roy of the Trinamool reiterated his party’s stand against use of EVMs and demanded that the Election Commission revert to ballot papers.

“EVMs should be jettisoned. I am opposed to EVMs. Ballot papers should be brought back,” Roy said. He said that a day before election results were declared, the BJP president said his party will win 300 seats and the party won 303 seats. “How is it possible?”, he asked.

Danish Ali of the BSP too questioned the reliability of EVMs. “Thanks to the EVMs, the government has come to power through the backdoor,” he said.

Ali also alleged that electoral bonds were used to help parties like BJP get funds from corporate houses.