It is always advisable to scotch your opponent with faint praise. (File)

Parliament monsoon session Highlights: Both the houses of Parliament were adjourned on Monday, four days before their scheduled completion of session. Lok Sabha Speaker Om Birla adjourned the house sine die, stating it met for 16 days wherein seven legislations were passed. Rajya Sabha Chairman M Venkaiah Naidu, whose tenure ends on August 10, adjourned the Upper House sine die, stating that detailed statistics of the session will be circulated during the course by the Rajya Sabha secretariat.

Bidding farewell to Naidu, Prime Minister Narendra Modi stated, “You (Naidu) have always said that you have retired from politics but are not tired of public life… Your term in the office may be coming to an end but your experiences will continue to guide the nation for years to come”. Meanwhile, the Leader of Opposition in the House, Mallikarjun Kharge, stated that though they may have different ideologies, he thanks Naidu for carrying out his responsibilities even under pressure.

The Congress party, meanwhile, has hit out at the Enforcement Directorate (ED) over its summons to Kharge. Party general secretary Jairam Ramesh issued a statement saying, “…in matters, issuing of summons by ED or any law-enforcing agencies to any MP much less the Leader of Opposition when Parliament is in session, is an outright affront to the sacred institution of Parliament and Parliamentarians.” He added, “it is high time that the presiding officers of both Houses may deliberate and ensure that such gross affronts on Parliament and MPs do not recur.”

Both the houses of Parliament were adjourned on Monday, four days before their scheduled completion of session. Lok Sabha Speaker Om Birla adjourned the house sine die, stating it met for 16 days wherein seven legislations were passed. Rajya Sabha Chairman M Venkaiah Naidu, whose tenure ends on August 10, adjourned the Upper House sine die, stating that detailed statistics of the session will be circulated during the course by the Rajya Sabha secretariat.

Both Houses of Parliament adjourned

Both Houses of Parliament adjourned.

A bill seeking to mandate the use of non-fossil energy sources such as biomass, ethanol and green hydrogen was passed by the Lok Sabha on Monday.

Piloting the Energy Conservation (Amendment) Bill, 2022, Power Minister R K Singh said "this is the bill for the future," and urged the members to approve it.

The bill was later passed by the House after rejecting amendments moved by some Opposition members.

The Minister said the renewable energy capacity addition in the country was fastest in the world.

The Bill provides for penalties for violations by industrial units or vessels, and on manufacturers if a vehicle fails to comply with fuel consumption norms. --PTI

The Upper House, have a greater responsibility: Venkaiah Naidu in his last remarks as RS Chairman

"We, the Upper House, have a greater responsibility. The entire world is watching India; India is on the move. I appeal to RS MPs to maintain decency, dignity & decorum so that the image & respect of the House is maintained," M Venkaiah Naidu says in his last remarks as RS Chairman & VP

Adhir Ranjan Chowdhury on Energy Conservation Bill: We make targets, but we don't have infra to meet them

During a discussion over the Energy Conservation (Amendment) Bill, Congress MP Adhir Ranjan Chowdhury pointed out that India was left out of the US-led group, Minerals Security Partnership, to reduce the dependence of the member nations on China for supplies of cobalt, nickel, lithium and the 17 rare earth minerals.

"Do you have access to mineral technologies? We make targets but we don't have the infrastructure to meet them," he said.

No established mechanism to rank cities on pollution: Govt to Lok Sabha

The government on Monday said there is no established mechanism for ranking cities in terms of pollution and that the satellite data used for the purpose by private institutions and universities is not validated by proper ground truthing.

Union Minister of State for Environment Ashwini Kumar Choubey said this in the Lok Sabha in response to a question by Congress MP Jyotsna Charandas Mahant.

"There is no established mechanism for ranking cities in terms of pollution. It also requires authentic data and proper peer review."

"The government is aware that several private institutions and universities are ranking cities adopting different methodologies, different datasets and using different weightages to parameters. The data used for ranking is extracted primarily from satellite imagery, which is not validated by proper ground truthing," the minister said. (PTI)

Infra assets worth over Rs 1.62 lakh crore to be monetised this fiscal: Finance Ministry

Infrastructure assets worth over Rs 1.62 lakh crore are expected to be monetised during the current fiscal, Parliament was informed on Monday.

The government had last year announced a Rs 6 lakh crore National Monetisation Pipeline (NMP) to unlock value in infrastructure assets across sectors, ranging from power to road and railways in four years till 2025.

In a written reply to the Lok Sabha, Minister of State for Finance Pankaj Chaudhary said about Rs 97,000 crore worth of public assets were monetised in the last fiscal (2021-22).

As proceedings resumed in the Lok Sabha at 2.15 pm, the House took up a discussion over the Energy Conservation (Amendment) Bill, 2022, moved by Union Minister R K Singh.

Congress MP Adhir Ranjan Chaudhary stated that despite years after signing the Kyoto Protocol, there has been no visible impact on the ground.

As MPs bid him farewell in the Rajya Sabha, outgoing Chairman Venkaiah Naidu said, "I tell all sides... respect democracy."

He was responding to IUML MP from Kerala Abdul Wahab's statement urging him to tell the BJP that there should be a democratic atmosphere in India.

As the Rajya Sabha resumed at 2.05 pm on Monday, MPs continued giving their farewell messages to Chairman Venkaiah Naidu.

Earlier in the day, Prime Minister Narendra Modi, LoP Mallikarjun Kharge and others also bid adieu to the outgoing Vice-President.

Speaking about the attack on BJP MP Ranjeeta Koli in Rajasthan's Bharatpur, party MP Ranjanben Bhatt demanded action on the culprits in the Lok Sabha.

She also spoke about Rajasthan CM Ashok Gehlot's statement over the death penalty for rapists. "The Rajasthan CM has said that rapists should not be hanged... we urge that action be taken on those who have done wrong," Bhatt said.

Koli has claimed that she was "attacked for the fourth time by the illegal mining mafia." "I had come to take stock of the situation after being informed that illegal mining was going on in the area. The mafia vandalised my vehicle. Fortunately, we escaped the vehicle on time," she was quoted as saying by PTI.

In a day marked with no disruptions by the Opposition, the Lok Sabha was adjourned till 2.15 pm following discussions over matters of public importance.

Following speeches by members bidding farewell to the Rajya Sabha Chairman Venkaiah Naidu, the House was adjourned till 2.05 pm.

🔴 You (Naidu) have always said that you have retired from politics but are not tired of public life… Your term in the office may be coming to an end, but your experiences will continue to guide the nation for years to come.

🔴 You have been of the opinion that disruptions of proceedings beyond a point were contempt of the House. I see the spirit of democracy in your principles… you have not only run the House through dialogue, liaison and coordination but also made it productive. Whenever there were disagreements between MPs, you always said, ‘Let the government propose, let the Opposition oppose and let the House dispose. Read more

"You (Venkaiah Naidu) have always said that you have retired from politics but are not tired of public life… Your term in the office may be coming to an end but your experiences will continue to guide the nation for years to come,” PM Modi said in the Rajya Sabha.

As TMC MP Derek O’ Brien recounted the story of Naidu losing his mother at an early age, the outgoing Chairman teared up.

O' Brien also stated that the members of the House urge you to continue to speak on issues such as the passing of Bills. "You have always asked us to send the Bills to committees and to scrutinise these Bills... we hope you will continuting speaking on these issues," he said. 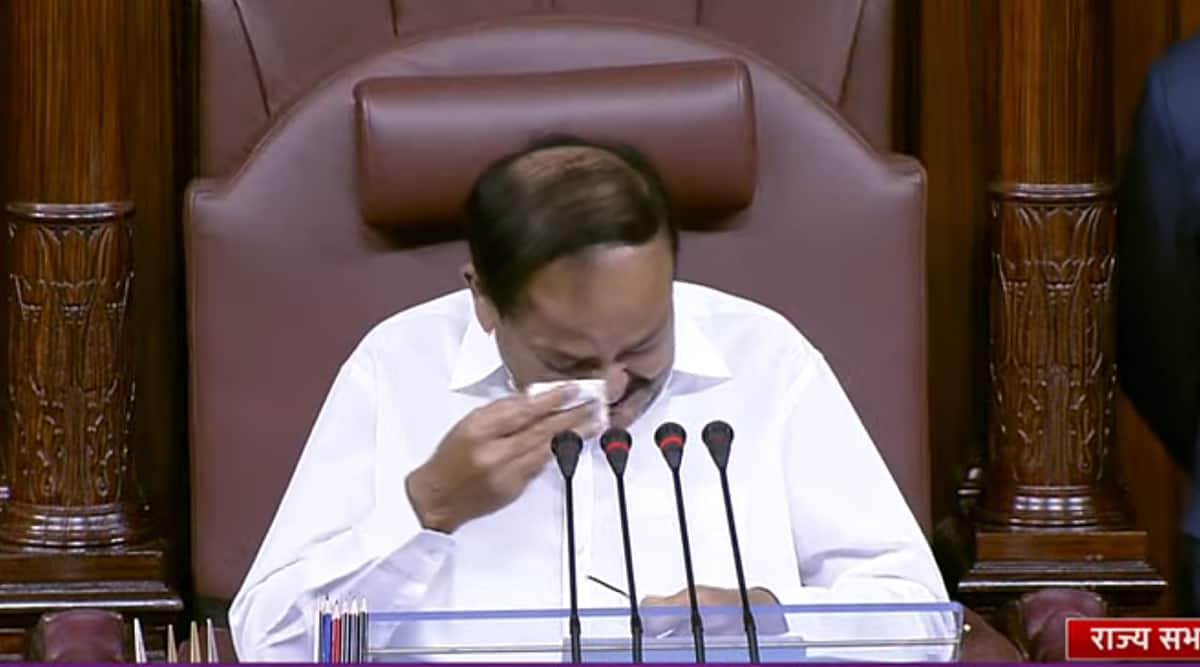 We may have different ideologies but I thank you for fulfilling your role despite pressures: LoP Mallikarjun Kharge to Naidu

While bidding farewell to Chairperson Venkaiah Naidu, Leader of Opposition in Rajya Sabha, Mallikarjun Kharge, said, "We may have different ideologies and I may have some complaints, but I thank you (Naidu) for carrying out your responsibilities and fulfilling your role even under pressure."

President, V-P were born in Independent India, this has symbolic importance: PM Modi

"We are celebrating Independence Day this time, when the country's President, Vice-President, Speaker, and Prime Minister are all those people who were born in Independent India and all of them hail from very ordinary backgrounds. I think it has symbolic importance," PM Modi said in Rajya Sabha

Quoting outgoing V-P Venkaiah Naidu, PM Modi said, "You have an interesting take on the debate over mother-tongue. You always say that mother tongue is like eyes, while a second language is like a pair of spectacles. You have ensured that members can speak in any language in the House."

In Punjab, Raghav Chadha seeks suggestions to be raised in House

Even as his appointment as chairman of an advisory panel has landed in the midst of a row, senior Aam Aadmi Party (AAP) leader and Rajya Sabha MP Raghav Chadha Sunday released a phone number asking people to give suggestions about issues that should be raised in Parliament.

Calling it a first of its kind initiative to strengthen the voice of common people, Chadha said that he was inspired by Delhi CM Arvind Kejriwal and Punjab CM Bhagwant Mann’s commitment to work for the welfare of people. Anyone can call on 9910944444 and register his or her suggestion, he said, adding that through the number, people can send their suggestions and feedback on the issues they wish to be raised in Parliament. People can also share videos or documents through WhatsApp on this number.

Opinion | The power in the purse strings