Lok Sabha on Thursday passed the bill to give constitutional status to the National Commission for Backward Classes (NCBC), making it a body with full powers to safeguard the rights and interests of Other Backward Classes.

This came a day after the Union Cabinet approved an amendment to The Scheduled Castes and the Scheduled Tribes (Prevention of Atrocities) Act. “The Union Cabinet has approved the restoration of the existing Act. The prime minister has already assured that the government will not allow dilution of the Act. We will introduce the Bill in the current session,” Home Minister Rajnath Singh said.

Singh was responding to Congress leader Mallikarjun Kharge’s statement that the government is yet to nullify the Supreme Court’s order on the SC/ST Act.

The Constitution (123rd Amendment) Bill, 2017 has been passed in Lok Sabha. The Bill grants the NCBC constitutional status, par with National Commission for Scheduled Castes and Scheduled Tribes (NCSC and NCST).

Lok Sabha has been adjourned for the day; proceedings will resume tomorrow morning.

BJP trying to 'cheat' OBCs ahead of elections: Mayawati

BSP chief Mayawati claimed the Centre's plan to introduce the Bill to grant constitutional status to the OBC Commission in the Parliament was nothing but an effort to "cheat" weaker sections ahead of the Lok Sabha elections next year. In  a party release, Mayawati said, "The BJP, which has tried to deprive backward sections like the Dalits and the Tribals of their rights, is now trying to bring a bill granting constitutional status to the backward commission to lure weaker sections."
"The BJP wants to cheat these sections on election eve and is therefore bringing the bill in the Parliament. This is nothing but part of their poll strategy," she said claiming the saffron party had always been "anti-backward and anti-reservation," she added.

Extending his support to the Bill, RLSP's Ram Kumar Sharma (RLSP) accused the Congress of speaking in favour of the backward classes only during elections. Ram Tahal Choudhury from also speaks in favour of the Bill.

Kothapalli Geeta from YSRCP lauded the Union government for introducing this 'historical' legislation. "The Bill provides more powers to the NCBC," she said. Noting that some powers of the states have been reduced, Geeta urged the central government to restore those powers.

CPI(M)'s P. Karunakaran demanded that one member of the panel must belong to the extreme backward class. Amendments are fine but it must be implemented in toto, he said.

Meanwhile, TDP's Rammohan Naidu (TDP) said his party has extended support to the SC/ST Bill. "We need to have an idea on how many OBCs are there in the country," he said.

"Assam is not outside the country; the freedom of TMC MPs are being curtailed. Will raise a privilege motion against the Assam government," TMC MP Saugata Roy said.

Speaking on the detention of TMC MPs at Silchar airport, Saugata Roy said four Lok Lok Sabha members and two Rajya Sabha members from his party have been detained and prevented from visiting Assam where the National Register of Citizenship was released on Monday. "This is a breach of privilege," he said. The speaker will look into the matter, the deputy speaker said. Read full story here.

As the session in the Lower House continues, Arvind Sawant of Shiv Sena urges the Centre to fulfil the Maratha quota demand. While referring to a report, Sawant said only 12 per cent of OBC (Other Backward Class) got jobs, even though they comprise 40 percent. The Shiv Sena leader said it is due to low enrollment in schools.

Chairman Venkaiah Naidu takes up short duration discussion on challenges in the agricultural sector. But Trinamool members want Home Minister's reply on the NRC issue. Naidu says Rajnath Singh is willing to lay the answer on the table, but opposition members did not allow him to speak on the issue yesterday.

The leader of Opposition Ghulam Nabi Azad said members elected from Assam must be given a chance to express their thoughts since the matter is utmost importance to the State. Agreeing with Azad, Parliamentary Affairs Minister Vijay Goel says he will ask the Home Minister to make a statement in the House.

Rajya Sabha adjourned after uproar in the house over NRC issue.

The Lok Sabha and the Rajya Sabha meets after lunch break.

Parliament proceedings will resume after lunch.

Question and answers on IIT cut-off marks and suicides

On a question that why is there a fall in the number of students who passed the IIT-JEE, Union HRD Minister Prakash Javadekar said a new cut-off was calculated so that reserved seats are filled-up. We have also increased the seats by 1000 this year, he said.

an AIADMK member asked the steps being taken to enroll more SC/ST students in IIT. Replying to him, Javadekar said only over 100 seats are not filled and it is unfortunate that many people are not opting for agricultural engineering.

Vijila Sathyananth (AIADMK) asked about suicides in IITs. Is caste discrimination a reason for such suicides, she asked. Javadekar said there is another discrimination in IITS, gender. Due to super numeric quota, 840 girls made it to engineering in IIT. We have started a 12-point programme that includes a two-week induction programme so that students get to mingle with each other. 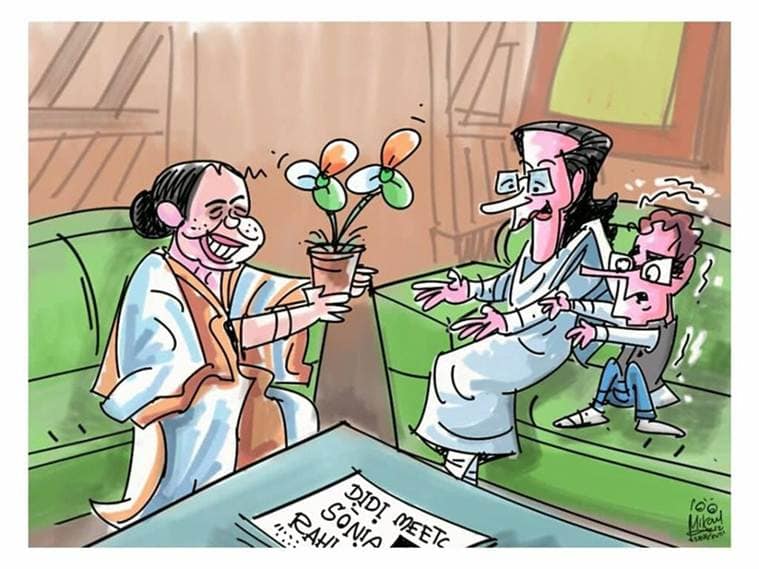 TMC's  Saugata Roy raised the NRC issue again. He said the Mathuvas are blockading rails since their names are excluded in the draft NRC.

Raising the NEET issue, Anbumani Ramadoss (PMK) said the purpose of NEET was decommercialising the medical education and to produce quality doctors. But today a student who has scored negative marks in physics and chemistry is studying medicine. A student who got 13.3% marks gets into medicine. How do you bring quality doctors like this, he asked.

Will introduce the SC/ST Bill in the current session: Rajnath Singh

In Lok Sabha, Home Minister Rajnath Singh said the Union Cabinet has approved the restoration of the existing SC/ST Act. Prime Minister Narendra Modi had already assured that the government will not allow dilution of the Act. We will introduce the Bill in the current session, the home minister said. BJD's Anubhav Mohanty asks what is the definition for NITI Aayog

BJD's Anubhav Mohanty asked what is the definition for NITI Aayog?  He asked how much employment was generated and said MNREGA, Deendayal Upadhyaya and Jan Dhan Yojana generate employment.

MoS Planning, Rao Indrajit Singh, said the first goal of NITI Aayog is to eradicate poverty. He elaborated the steps taken including providing basic services such as food, shelter and job.

Mallikharjun Kharge raised the issue of dilution of SC/ST Act. "The government has not done anything to nullify the Supreme Court order. You bring ordinances for every small issue, why didn't you bring an ordinance for this issue," he said.

On Thursday, Union Minister of Social Justice and Empowerment Thaawar Chand Gehlot will take up the Constitution (One Hundred and Twenty-third Amendment) Bill, 2017 in Lok Sabha for further amendments as it was returned by Rajya Sabha. Rajya Sabha had, on January 3, asked for some changes in the bill to amend the Constitution of India.

The lower House will also consider the National Sports University Bill, 2018, which was moved by Rajyavardhan Rathore on August 1. Also, Union Minister of Health and Family Welfare JP Nadda will move the National Medical Commission Bill, 2017, to be taken into consideration.