Parliament Monsoon Session Highlights: Meanwhile, Mallikarjun Kharge shot off a letter to Chairman M Venkaiah Naidu urging him to expunge remarks made in the House by Union ministers Nirmala Sitharaman and Piyush Goyal about Congress president Sonia Gandhi on Thursday.

Parliament Monsoon Session Highlights: The ninth day of the Monsoon Session of Parliament commenced on Friday amid protests by the Opposition in both Houses. The Lok Sabha and Rajya Sabha were adjourned within minutes, as Opposition leaders continued to demand a discussion on the issue of price rise, GST and the Agnipath recruitment scheme.

Congress MP Adhir Ranjan Chowdhury on Friday tendered an apology to President Droupadi Murmu over his “Rashtrapatni” remark for which he drew considerable flak from the ruling BJP on Thursday. In a letter addressed to the President, he wrote: “I am writing to express my regret for having mistakenly used an incorrect word to describe the position you hold. I assure you that it was a slip of the tongue. I apologise and request you to accept the same.”

Meanwhile, Mallikarjun Kharge, leader of the Opposition in the Rajya Sabha, shot off a letter to Chairman M Venkaiah Naidu on Friday urging him to expunge remarks made in the House by Union ministers Nirmala Sitharaman and Piyush Goyal about Congress president and Lok Sabha MP Sonia Gandhi on Thursday. Referring to a convention in the Rajya Sabha wherein members are not allowed to make critical remarks about the Lok Sabha or its members, Kharge also urged the chairman to direct Goyal and Sitharaman to apologise for “violating the sacrosanct convention”.

Over 4.83 crore cases pending from SC to subordinate courts: Govt

Cases pending in various courts across India are moving towards the five crore mark, according to the data shared by the government in Lok Sabha on Friday.

The question "whether the government has assessed the reasons for huge pendency of cases in various courts" meant for a written reply, was asked by a total of 26 Lok Sabha members. (PTI)

Foreign missions must conduct all business with states via MEA: Govt amid Kerala gold smuggling row

Amid a political uproar over the gold smuggling case in Kerala, the Centre on Friday said the state government has not sought its permission to seek help of UAE diplomats for sending baggage belonging to state executives.

In a written reply to a question in Lok Sabha, Minister of State for External Affairs Rajkumar Ranjan Singh said that as per existing instructions of the Indian government, foreign missions are required to conduct all official business with the state governments through the Ministry of External Affairs.

"No programme may be arranged or calls on dignitaries fixed by the state governments for foreign diplomats, including Heads of Missions, unless cleared by the Ministry of External Affairs," Singh said. (PTI)

Lok Sabha likely to have debate on price rise on Monday

After a near washout of House proceedings for two weeks, Lok Sabha is likely to have a debate on price rise on Monday, followed by Rajya Sabha on Tuesday, political sources said.

Since the beginning of the session on July 18, the Opposition in both the House had been raising the issue of rising prices and GST, leading to near washout of proceedings.

Clouds of uncertainty are looming over a productive Monsoon Session with the ruling and opposition sides leaving no opportunity to target each other. The ruling BJP has escalated its offensive over Congress leader Adhir Ranjan Chowdhury’s controversial reference to President Droupadi Murmu on Thursday, while the Opposition is raising the “brutal heckling, verbal assault and physical intimidation” of Congress president Sonia Gandhi in the Lok Sabha during a face-off with Union minister Smriti Irani the same day.

The charged-up atmosphere in the Lower House on Friday and the escalated pressure from both the sides indicated that the disruptions and the abrupt adjournments are likely to continue next week also.

The Lok Sabha functioned barely for a few minutes on Friday before it was adjourned for Monday as MPs from both the sides were on their feet shouting slogans against each other. The Upper House, too, failed to transact any significant business on Friday due to disruptions caused by the opposition members. Read More

The TMC on Friday targeted the Centre over the issue of women safety citing a case of a Gujarat BJP MLA allegedly raping a woman, a day after the BJP accused the Congress of hurling a 'deliberate sexist insult' at President Droupadi Murmu. Both the Houses of Parliament were adjourned on Friday amid uproar over Congress leader Adhir Ranjan Chowdhury's 'rashtrapatni' remark.

'Dear PM @narendramodi and @AmitShah. Look forward to seeing you both Monday morning #ParliamentMonsoonSession. Since you are ever so eager to raise issues of Oppn disrespecting #women All of us will be waiting. 11am Monday. See you then. P.S. If 56 inch can't come, send #2,' tweeted TMC RS MP Derek O'Brien.

He also attached a news report about police investigating allegations of rape and illegal confinement of a woman against Gujarat's Rural Development Minister and BJP MLA from Mahmedavad Arjunsinh Chauhan.

Look forward to seeing you both Monday morning #ParliamentMonsoonSession

Since you are ever so eager to raise issues of Oppn disrespecting #women All of us will be waiting. 11am Monday. See u then👇

No definitive decision taken on issue of rotational headship at AIIMS:Mandaviya to Lok Sabha

No definitive decision has been taken on the issue of "rotational headship" at AIIMS, New Delhi, Union Health Minister Mansukh Mandaviya informed the Lok Sabha on Friday.

In a written reply to a question on whether the government has any proposal to implement "rotational headship policy" in AIIMS, New Delhi, the minister said, "The recommendations of various committees on the issue of rotational headship have been divergent and marked by absence of consensus". "Hence, no definitive decision has been taken," he said.

Won't be silenced, won't be cowed down: TMC

We will NOT be silenced, we will NOT BE COWED DOWN. People's issues must be heard!#PriceRise #GST pic.twitter.com/sZ0hPetVie

Both Houses adjourned for the week amid uproar

Amid protests by the Opposition, both Houses of Parliament were adjourned till August 1.

The Lok Sabha was adjourned till 12 noon on Friday within minutes of commencement of proceedings due to opposition protests. As soon as the House met at 11 am, Congress MPs along with a few other opposition members came to the well of the House shouting slogans against the government. BJP women members, who were standing in the second row of the Treasury benches, too stood up and raised counter slogans. (PTI)

Rajya Sabha proceedings on Friday were adjourned for close to an hour after uproarious scenes by both opposition and Treasury benches over different issues. While the opposition parties pressed for a discussion on the hooch tragedy in Gujarat as well as the record rise in prices of essential commodities, BJP MPs were up on their feet shouting slogans seeking Congress president Sonia Gandhi's apology over her party leader's remarks on the President. (PTI)

Proceedings commenced in both Houses of Parliament promptly at 11 am on Friday morning amid protests by the Opposition. In the Rajya Sabha, Union Ministers are laying the papers on the table.

RJD MP Manoj Kumar gave a zero-hour notice in the Rajya Sabha on the issue of "mental healthcare in India."

Criticising the BJP for employing unfair tactics to avoid discussions on price rise, Congress leader Mallikarjun Kharge said that the saffron party continued to demand an apology from Sonia Gandhi over Adhir Ranjan Chowdhury's controversial 'Rashtrapatni' remark, even though he had already said sorry. "They are doing this deliberately so that they don't have to discuss issues like price rise and inflation," he told ANI.

Amid escalating tension in the Parliament, all members of the Congress Parliamentary Party are set to hold a meeting today, according to news agency ANI.

Adhir Ranjan Chowdhury: ‘I felt I am not an orphan…I have a guardian in Sonia Gandhi’

On a day his remark, calling President Droupadi Murmu as “Rashtrapatni”, drew fresh battle line between the BJP and the Congress, the opposition party’s Lok Sabha leader Adhir Ranjan Chowdhury tells MANOJ C.G. that it was a slip of tongue, and the ruling party is using it to “create a fuss only to divert people’s attention from issues such as back-breaking price-rise”.

Excerpts: You were in the eye of the storm today over your ‘Rashtrapatni’ remark for President Droupadi Murmu. Why did you say that?

The BJP has proved itself as a party that can make a mountain out of a molehill. On Wednesday, we had taken a march to Rashtrapati Bhavan, knowing well that we will be prevented from proceeding. For the last over one week, we have been seeking a discussion in Parliament over price-rise, ballooning unemployment, the Agnipath scheme, and misuse of investigative agencies to subjugate opposition parties. Read more. 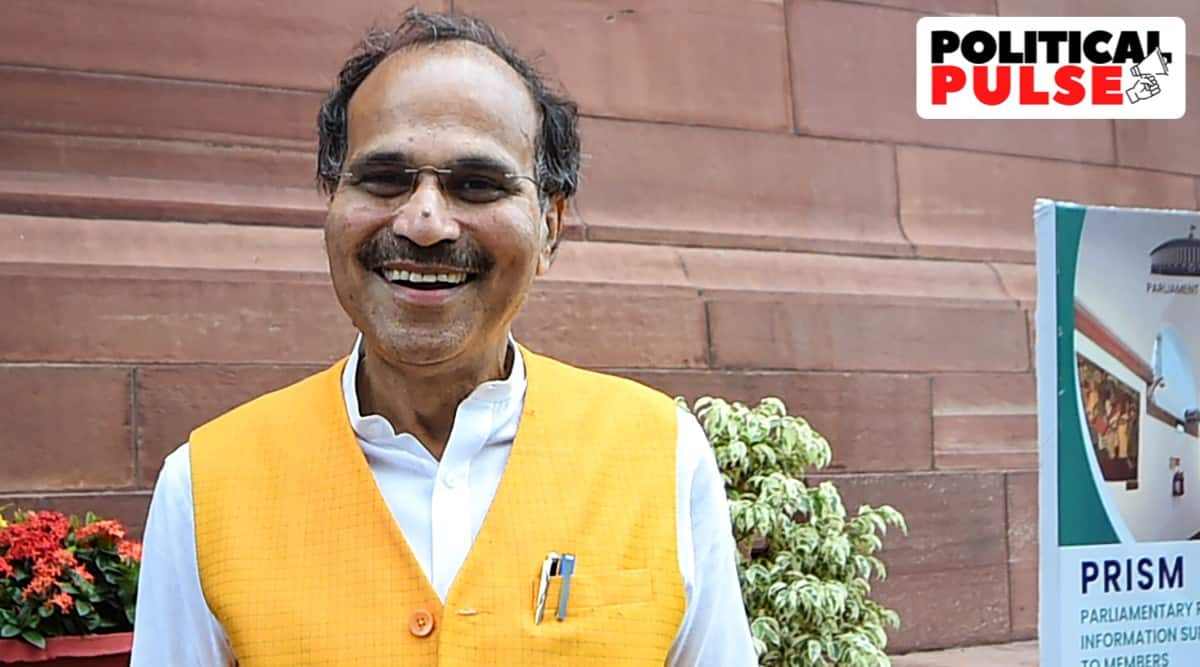 Deepening the divide in Parliament, already rocked by noisy protests and repeated adjournments, Union Minister Smriti Irani and Congress president Sonia Gandhi faced off Thursday, prompting the BJP and Congress to hurl accusations of “intimidation” and “heckling” at each other in the wake of a remark by Congress leader in Lok Sabha Adhir Ranjan Chowdhury regarding President Droupadi Murmu.

After a video clip of Chowdhury referring to Murmu as ‘Rashtrapatni’ did the rounds — he said it was “a slip of tongue” and he would apologise to the President because he “never meant to disrespect” her — the BJP, accused by the Opposition of “throttling democracy” by not allowing any discussion on GST rates and price rise, demanded that Sonia Gandhi, as chief of the Congress, apologise for her colleague’s remark.

While Union Minister Nirmala Sitharaman led the offensive against Sonia inside Rajya Sabha and outside Parliament House, Irani slammed the Congress in Lok Sabha. “Chowdhury’s comments were not a slip of tongue. It was a deliberate sexist insult against the President,” Sitharaman said in a brief statement in Rajya Sabha. Read more. 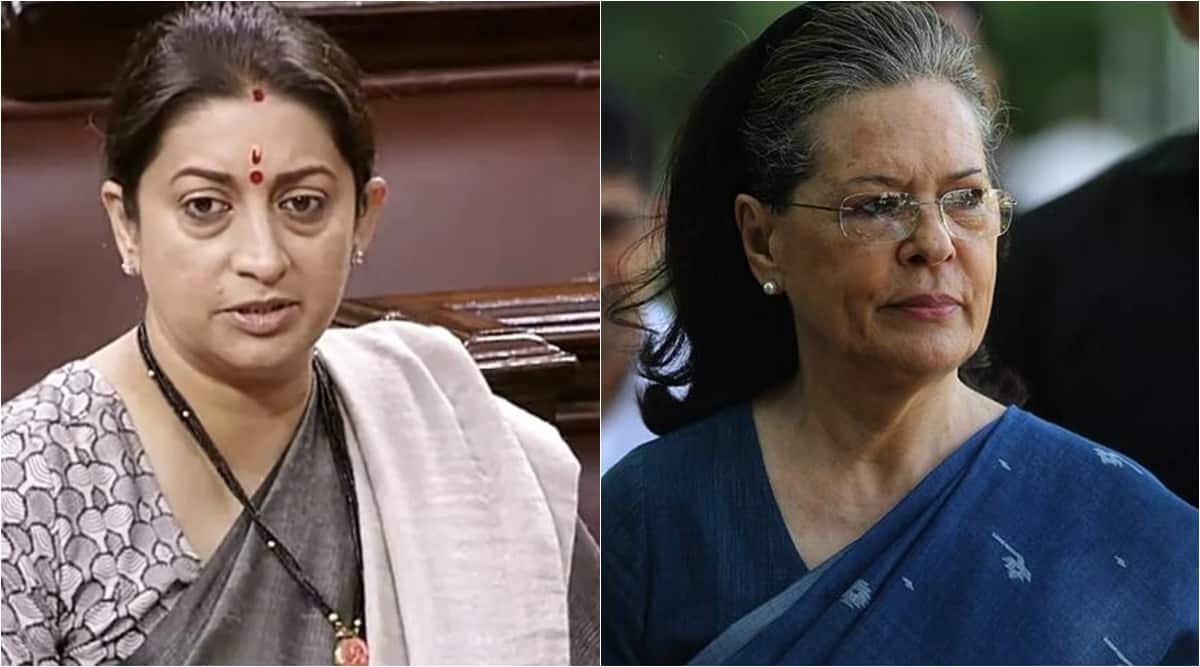 Nineteen opposition members were suspended from Rajya Sabha for a week Tuesday (July 26), provoking Trinamool Congress leader Derek O’Brien to say that the government had turned Parliament into a “deep, dark chamber”. Seven of O’Brien’s Rajya Sabha colleagues were suspended, along with six MPs from the DMK, three from the TRS, two from the CPM, and one MP from the CPI. The MPs were suspended for “unruly behaviour”. On November 29 last year, 12 opposition members were suspended in Rajya Sabha on the very first day of the Winter Session for “their unprecedented acts of misconduct, contemptuous, unruly and violent behaviour and intentional attacks on security personnel” on August 11, the last day of the previous Monsoon Session.

EXPLAINED | Under what rules can MPs be suspended from Parliament?

Nineteen Rajya Sabha MPs of the Opposition suspended for a week, a day after four Lok Sabha Opposition MPs were suspended for the entire Monsoon Session. This was not a show of “enough is enough” firmness by the Lok Sabha Speaker and the Deputy Chairman of the Upper House. This cannot be passed off as action taken to “uphold the dignity of the House”, to punish “unruly behaviour” “misconduct” and “utter disregard” to the House and the authority of the Chair. A decision that effectively deprives 23 Opposition MPs of a voice in Parliament for a week or the entire session, must, in the first place, be avoided. If it must be taken, the bar must be set very high indeed. Nothing that transpired in either House over the last few days can be said to merit this extreme form of disciplinarianism. The suspensions come in a political context that makes them look even more jarring and disproportionate. Already beset by a fading of lustre that afflicts institutions in general with the passage of time, growing cynicism and the pressures of populism, Parliament is in particular need of resuscitation in times of a strong executive that feels less accountable to the legislature.