Parliament Highlights: The Lok Sabha on Thursday passed the amended Muslim Women (Protection of Rights on Marriage) Bill, 2018, which criminalises Triple Talaq, after arguments went on for over four hours.

Parliament Winter Session Highlights: The Lok Sabha on Thursday passed the amended Muslim Women (Protection of Rights on Marriage) Bill, 2018, which criminalises Triple Talaq, after arguments went on for over four hours. Before the Triple Talaq bill motion was adopted for consideration, Congress and AIADMK MPs staged a walkout.

While the Opposition demanded a joint select committee on the instant triple talaq bill, Law Minister Ravi Shankar Prasad called it a bill for “justice and humanity.” Prasad said, “It is essential that the Parliament talks in one voice and not make it a religious issue.” The Opposition, meanwhile, has accused the Modi government of having “ulterior motives” in passing the bill.

The Rajya Sabha was adjourned within minutes of opening. The Upper House was closed without any transaction following protests over the Cauvery issue and the murder of a cop in Bulandshahr.

Lok Sabha passes amended Muslim Women (Protection of Rights on Marriage) Bill, 2018, which criminalises Triple Talaq, after arguments went on for over four hours. House has been adjourned for the day. Will resume at 11 am tomorrow.

Motion adopted for consideration with 238 ayes

With 238 ayes 238 and 12 noes, the triple talaq bill motion was adopted for consideration. Now, the voting for clause by clause consideration to be adopted is underway in the Parliament.

Don't understand why a secular nation like India should not eradicate Triple Talaq, says Prasad

Law Minister Ravi Shankar Prasad says the Triple Talaq Bill was introduced to adhere to the Supreme Court's ruling. Stressing that the police were helpless in taking action without the backing of law, Prasad says over 400 cases of instant Triple Talaq was reported this year alone. Prasad then goes on to explain the features of the Bill.

"The Bill allows only the affected woman or her family to file a case. There are provisions for reconciliation. He says the court can grant bail after taking the affected woman's account. The magistrate will decide the compensation," the BJP leader says. He further says about 22 Muslim nations, including Pakistan and Bangladesh, have codified triple talaq. "I don't understand why a secular nation like India should not eradicate instant Triple Talaq, which even Muslims countries have done away with,"

On the non-bailable clause in the Triple Talaq Bill, Union Law Minister Ravi Shankar Prasad says offences such as domestic violence and dowry are also non-bailable offences. "The Opposition's demand for a joint select committee has possibly only one reason -- Why it is criminalized? When Parliament has passed bills calling for harsh punishment for other crimes then why no one said what will happen to families of culprits," Prasad says.

If Dowry law can be passed, why not Triple Talaq Bill, says Ravi Shankar Prasad

Law Minister Ravi Shankar Prasad is now putting his final arguments. He says no one in the Opposition supported the Triple Talaq Bill. "If Dowry law can be passed, why not Triple Talaq Bill," he says. Prasad tells the Lok Sabha that the bill has made the offence compoundable, meaning that the case can be withdrawn if the man and his estranged wife reach a compromise and that only the wife and her close relatives can file an FIR, ruling out the law's misuse.

AIMIM chief Asaduddin Owaisi is now speaking on the Triple Talaq Bill. He says the party rejects the bill as it is against the belief of religious freedom. "You are decriminalising Section 377 but criminalising Triple Talaq," he says. Don't misguide the nation on Triple Talaq in the name of Supreme Court judgment, Owaisi says. Owaisi says there is no provision in the bill for maintenance of the wife and children.

Accusing the BJP government of bringing the Triple Talaq Bill keeping in mind vote bank politics, Congress MP Ranjeet Ranjan says, "The Quran mentions the 'advance rules' for divorce," Ranjan says. She claims the community is not aware of the procedure set by their religion. She wonders why the issues faced by Hindu women are not discussed. "Won't you bring a law to protect Hindu women," the Congress MP asks.

NCP MP Supriya Sule Bill says the Triple Talaq bill is not for women who are at the top of the pyramid but it is for women who do not know their rights. "So is this the best we can do for them? Throwing their husbands in jail? Should we not stress on other similar women empowerment Bills like the ones about women's reservation in Parliament or marital rape," Sule says. She further goes on to say that she is not against the intention of the law, but the way in which it is being pushed across. "Nobody on either side of the table is against the cause," she says. Reacting to the Opposition's questions regarding the due process of law, Smriti Irani says the Triple Talaq Bill mentions that a magistrate will decide the punishment. "We are not doing this for vote bank politics. If that was all we were interested in, the cries of those Muslim women would not have reached this House," she says. 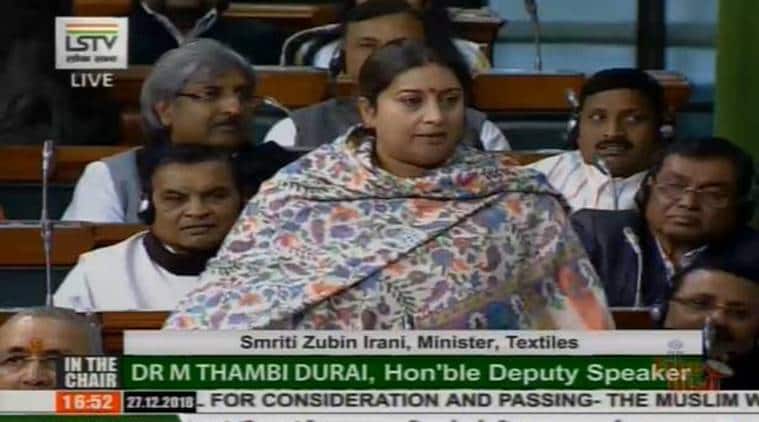 Smriti Irani: Over 400 women have been victims of Triple Talaq after SC ruling

Union Minister Smriti Irani is now presenting her views on the Triple Talaq Bill. She says over 400 women have been victims of triple talaq even after the Supreme Court ruled against it. "Four hundred is a huge number. Even if one woman is affected, every member sitting here should be disturbed," she says.

CPI(M) MP Mohammed Salim too joins the Opposition chorus in demanding a joint parliamentary panel probe into the Triple Talaq Bill. A fired up Salim then brings to notice some comments made by RSS leaders. The remarks are eventually expunged by the Speaker. "You treat Muslim men as second class citizens, and you are talking about justice for Muslim women? Crocodile tears are being shed on behalf of Muslim women," the CPI(M) leader says. Salim says the fight to abolish Triple Talaq has been on for over 50 years by progressive Muslim women groups. "It did not start five years ago like our PM is claiming," he says.

Under pretext of women's right, govt is messing with nation's integrity: TRS MP

TRS MP from Mahbubnagar says under the pretext of protecting women's right, the government is messing with the integrity of the nation. "Modifying religious practices is not the purpose of this House. This Bill is entirely arbitrary. We should ensure the integration of minority community into the majority, not alienate them. This Bill is misconceived," he says.

Govt should focus more on saving lives of people being lynched in BJP-ruled states: TDP MP

Jayadev Galla of TDP says the government should focus more on saving the lives of men and women who are being lynched in BJP-governed states. Opining on the Triple Talaq Bill, Galla says many countries like Pakistan have banned the practice and introduced a Civil Code. "If a man beats his wife, he belongs in jail, but if he divorces her for whatever reason, does he belong in jail?" the TDP MP from Guntur asks. He also asks why the Bill excludes Jammu and Kashmir from its purview. "Is J&K not a part of India?" Galla asks.

Now, BJD's Rabindra Jena is speaking in the Lok Sabha. He demands on bringing a Codified Muslim Personal Law as there is no safeguard to stop the misuse of the law. Reminding BJP about their promise of providing 33 per cent reservation for women, Jena says, "Implementing the Triple Talaq Bill in its current form will be a disaster as many men, fearing criminal prosecution, may simply abandon their wives rather than divorcing them".

TMC leader Sudip Bandyopadhyay now brings up the topic of women reservation. "When we say about protecting the interest of women, we don't talk about the 33 per cent reservation for women in Parliament. Of the 34 TMC MPs, 12 are women. That is how committed we are to elevating women," he says. Bandyopadhyay says TMC opposes the criminalising proposition in the Triple talaq Bill.

Congress leader Mallikarjun Kharge interrupts and asks why a provision to criminalise a civil issue is not there in Hinduism. "But there is no triple talaq in Hinduism, is there?" Naqvi snaps back. The Union Minister says many countries ruled by Muslim law like Pakistan and Bangladesh have scrapped the Triple Talaq. "Why is a secular nation like ours hesitating? I do not understand why many in the Opposition are more worried about the criminals than the victim. This law is not to victimise anyone, our intention is pure," he says.

Naqvi says Triple Talaq still happening in India despite Supreme Court's order. "Congress buckled under the pressure of fanatics, didn't let a law be made against triple talaq," the BJP MP says.

Issue not related to Islam but is about injustice, says Naqvi

Minority Affairs Minister Mukhtar Abbas Naqvi says the issue is not related to Islam or religion but is about injustice. "When efforts were made to stop Sati or child labour, there were people who equated it with overreach into religion. But we overcame all that and justice prevailed. They why do we have a problem with Triple Talaq?" Naqvi asks.

Minority Affairs Minister Mukhtar Abbas Naqvi is now speaking and begins by responding to the Opposition criticism that the Triple Talaq Bill was formulated without consulting the stakeholders. "Muslim women went to the PM and one woman said that she was given the third talaq. She asked the PM when everyone is living in the 21st century, why are you making us beg for mercy?" Naqvi says. 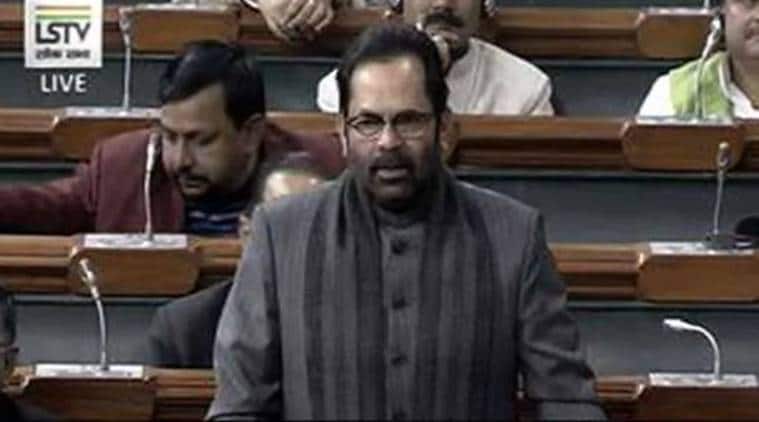 'Triple Talaq bill fails to answer who will take care of wife, kids for 3 years'

Continuing his speech, AIADMK MP Anwhar Raajhaa says the proposed bill is unconstitutional, against national integrity and is against Muslim personal law. "Why are Muslim husbands being targeted. The bill fails to answer who will take care of the wife and children for three years,” he says. More than two crore Muslim women participated in silent protests against this Bill, he says. "It is ironical that such a Bill is being pushed forward with scant inputs from those who will be affected. This bill is an eyewash, and undemocratic," Raajhaa says. He says that the Bill should be either deferred or be referred to joint committee.

Parliament is meeting on December 27 after a long weekend. (Express photo by Ravi Kanojia)

Parliament, today, is meeting after the Christmas recess. Last week, the Lok Sabha witnessed disruptions over a range of issues, including protests by the Congress, which is demanding a joint parliamentary committee probe on the Rafale deal.

The fresh Bill to make the practice of triple talaq among Muslims a penal offence was introduced in Lok Sabha on December 17 to replace an ordinance issued in September. Under the proposed law, instant triple talaq will be illegal and void and will attract a jail term of three years for the husband. The fresh bill will supersede an earlier bill passed in the Lok Sabha and pending in the Rajya Sabha.