Parliament Winter Session 2019 Today HIGHLIGHTS: Prime Minister Narendra Modi hailed the passage of the quota Bill in both the houses of the Parliament, calling it a victory for social justice.

Parliament Winter Session Today HIGHLIGHTS: The Constitution (124th Amendment) Bill, seeking to provide 10 per cent reservation to the economically weaker sections among general category, was passed in the Rajya Sabha Wednesday. The Bill, which was passed in the Lok Sabha yesterday, was cleared in the Upper House today with 165 votes.

Earlier in the day, the Opposition accused BJP of playing “politics” and questioned the timing of the quota Bill. They demanded that the Bill be sent to a select committee for scrutiny. Congress leader Anand Sharma said, “You brought the bill in haste because you had to before the Model Code of Conduct comes into force, thinking that if not 2 crore then let’s dangle a carrot in front of the public, show them another dream that Modiji made arrangements for their children’s employment.” Sharma also accused the government of not taking the Opposition into confidence. “There is no consent from the Opposition. The situation is such that there is no dialogue between the Opposition and the government.”

CPI's D Raja, while protesting against the Bill, said it was brought in haste by the BJP government keeping an eye on elections. "It hasn't been scrutinised properly. . I don't think it'will stand judicial or social scrutiny in coming days," he told ANI.

Prime Minister Narendra Modi hailed the passage of the quota Bill in both the houses of the Parliament, calling it as a victory for social justice.

Delighted the Rajya Sabha has passed The Constitution (One Hundred And Twenty-Fourth Amendment) Bill, 2019.

Glad to see such widespread support for the Bill.

Passage of The Constitution (One Hundred And Twenty-Fourth Amendment) Bill, 2019 in both Houses of Parliament is a victory for social justice.

It ensures a wider canvas for our Yuva Shakti to showcase their prowess and contribute towards India’s transformation.

By passing The Constitution (One Hundred And Twenty-Fourth Amendment) Bill, 2019, we pay tributes to the makers of our Constitution and the great freedom fighters, who envisioned an India that is strong and inclusive.

165 members vote in favour of the quota Bill 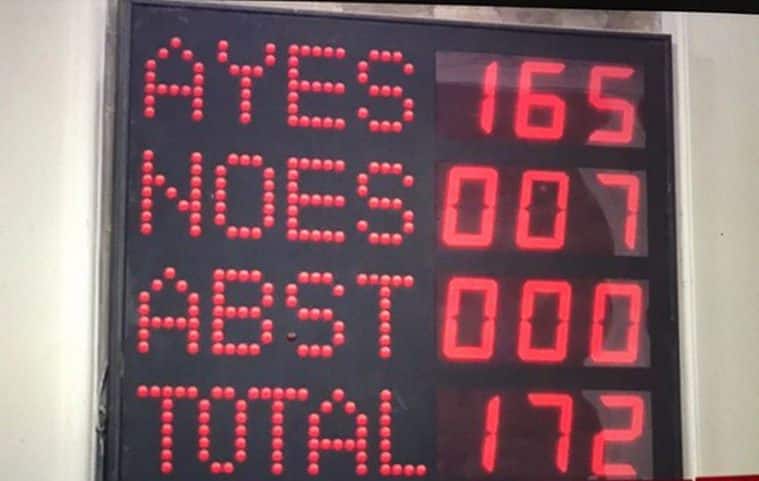 The Rajya Sabha passes the Constitution (124th Amendment) Bill, 2019, with 165 votes. The Bill will provide 10% reservation to the economically weaker sections among the general category in educational institutions and government jobs.

Clause 1: The adopting formula and the title of the Bill accepted by the House with 156 votes.

KC(M) leader Jose K Mani says he supports the reservation bill but questions the timing of its introduction. "I hope it doesn’t turn out to be a gimmick like demonetisation,” he says. BJP's GVL Narasimha Rao says that poor people can see a real "mahapurush", a "real mahatma" in Prime Minister Narendra Modi. "The Prime Minister and the BJP government did justice to the poor section of the society in real sense,” says Rao.

TDP MP Kanakamedala Ravindra Kumar says quota bill won't benefit anyone, terms it a 'political gimmick'. “This bill is not going to benefit anyone. This bill is nothing but a political gimmick, which has been brought at the fag end of the session keeping elections in mind,” the TDP MP says. Speaking on the issue, MoS Social Justice and Empowerment Ramdas Athawale says he strongly supports Bill and praises BJP. “The BJP is for the Dalits, for all communities, for every religion, every caste, everyone," he says.

Intention behind this Bill is to undermine the Constitution: D Raja

D Raja, CPI(M) "The Bill has been signed on Jan 7, the Draft Bill was passed on Jan 8 and on Jan 9 we are discussing it here. The intention behind this is to undermine the Constitution which has concerned many people in the country."

Praful Patel: 8 lakh may not be enough for the city people but it means a lot for village people.

NCP leader Praful Patel in Rajya Sabha said that 8 lakh may not be enough for the city people but it means a lot for village people.

Satish Chandra Misra, BSP: "We demand that minorities be given separate reservation."

He further said, "This is fraud on the poor of the upper caste."

Kapil Sibal: If a nine judge bench held the EWS quota unconstitutional, how can you amend the Constitution

Kapil Sibal: "The Mandal Commission provision of 10% reservation for economically weaker category was declared unconstitutional by the Supreme Court. If a nine judge bench held it unconstitutional, how can you amend the constitution?" (ANI)

Not all OBCs and Dalits get benefits of reservation: Kapil Sibal

Speaking in the Parliament, Congress veteran Kapil Sibbal said, "The government said that 10% reservation will be given to the economically poor among the general category. But did they collect any data to ascertain the percentage of OBCs and Dalits in different states?"

"I remember the Mandal Commission's report came in 1980 and it was first introduced in the Parliament in 1982. Then in 1990, it was passed. So it took 10 years to pass that Bill. And here the government is trying to pass a Bill without any data, without any report. So I would like to ask the government how did they set the 8 lakh cap for this bill?"

There are poor among upper castes as well: Ravi Shankar Prasad

Ravi Shankar Prasad said, "There are people from the Brahmin and Rajput communities who are poor as well. Are we not supposed to think about them."

Ravi Shankar Prasad said in the Rajya Sabha that the country has given us the right to make and change laws in both the Houses. The only restriction is that basic structure of the Constitution should not be amended. The minister also said that the reservation does not come under the basic structure.

Has the government done any study to back the 10% quota for economically poor: Kanimozhi, DMK

Speaking in the Rajya Sabha, DMK leader Kanimozhi asked the government if they have done any study to back the 10% quota for economically poor among general category. She also raised doubts over the urgency shown by the government to bring such an important Bill.

Supporting the Bill, Shiv Sena leader Anil Desai said there should be a mechanism to check the implementation of the Bill and eligibility criteria of the people covered under it.

Days ahead of the General Elections, the quota Bill was approved in Lok Sabha on Tuesday. The Constitution (124th Amendment) Bill 2019 was passed in Lok Sabha on the last day of the Winter Session with 323 votes in favour and just three against. Barring AIMIM’s Asaduddin Owaisi and IUML’s E T Mohammed Basheer, who spoke against the Bill — P K Kunhalikutty is the other IUML MP in the House — all the other members present extended their support. The Bill was introduced by Union Minister of Social Justice & Empowerment Thaawarchand Gehlot, who called it a "historic decision."

Modi later posted on his Twitter account that the passage of the Bill “is a landmark moment in our nation’s history”. “It sets into motion the process to achieve an effective measure that ensures justice for all sections of society,” he wrote.

In the morning, Home Minister Rajnath Singh addressed Rajya Sabha on the violence that broke out in Assam over Citizenship Amendment Bill. "The Bill is not Assam specific. We will strive to protect the culture and identity of Northeast," he said after the House resumed.

Finance Minister Arun Jaitley said the government had the authority to extend the proceedings of the House when it has to take up important bills. "The country expects the House to function," he said. The proceedings in the Upper House were extended by a day amid Centre's push for both the quota Bill and the Triple Talaq Bill.

The main Opposition Congress party pointed out that it had earlier sought reservation on similar lines, but alleged that the government’s “way of pushing the Bill” is undemocratic. “This is butchering Indian democracy. You (Speaker) are the custodian of this House. You should not allow this. We are not opposing the Bill, but opposed to the way the government is doing it. It should be sent to a joint parliamentary committee, which can study it in a month,” Congress MP K V Thomas said.