Parliament Highlights: No document will be asked for in NPR, no one will be marked ‘doubtful’, says Amit Shah

Parliament Highlights: Amit Shah said 1,922 people who could be seen spreading violence in various videos of the riots have already been identified.

Parliament Today Highlights: Union Home Minister Amit Shah Thursday clarified that no citizens would be marked ‘doubtful’ and no documents would be asked for in NPR. While replying to a remark made by Congress’ Kapil Sibal, he also said that if anybody doesn’t have any document, he or she would not have to submit that.

Shah vowed to punish those behind the Delhi riots, irrespective of their religion and party. Speaking during a session on Delhi riots in Rajya Sabha, Shah said, “We won’t spare anybody, irrespective of whichever party or religion they belong to. We will set an example by punishing the rioters.”

Terming Shaheen Bagh “communal”, “divisive”, BJP Rajya Sabha MP from Rajasthan Vijay Goel Thursday blamed the protests there for the riots in Delhi. While speaking in the Rajya Sabha, Goel said, “Had there been no Shaheen Bagh, there would not have been any riots.”

Launching a blistering attack on the central government, Congress leader Kapil Sibal asked Union Home Minister Amit Shah on why FIRs have not been registered against those who delivered hate speeches that allegedly incited communal violence in Delhi. “You can do anything to protect cows, can’t you do anything to protect the lives of human beings? Do we need to bring another Article to ensure the protection of human being?” the former union minister asked.

Rajya Sabha adjourned till 11 am on Friday

Rajya Sabha adjourned till 11 am on Friday.

"Delhi government is working well towards compensation and relief of the riot victims. The central government, too, is supporting it," says Amit Shah

Wrong to identify riots with my party: Amit Shah

Terming it wrong to identify riots with his party he said, "We are not the one to trigger riots, we are among those to find out the rioters and punish them."

No one will be marked doubtful, no document will be asked for in NPR, clarifies Amit Shah

1. No documents will be asked for in NPR

2. If you don't have any document, you won't have to submit that.

3. Nobody will be marked 'doubtful'

"I reiterate to my Muslim brothers and sisters that false propaganda is being spread on the issue of the Citizenship Amendment Act (CAA). This Act is not to take anyone's citizenship but to give citizenship," Amit Shah said in Rajya Sabha

Owners of fake accounts which spread hatred will be brought to book: Amit Shah

"There were some social media accounts that started 2 days before violence and were deactivated on December 25. These accounts only functioned to spread hatred. Their owners must be thinking that they are safe. But this is a digital age. We will find them and present them before law," Amit Shah said.

Despite instigation from various quarters, Delhi Police restricted the riots to 4% of the area and 13% of the population, said Amit Shah. "Such effort of the police is laudable," he added.

Amit Shah said 1922 people who could be seen spreading violence in various videos of the riots have already been identified. He added that the government will soon find out who funded the rioters.

Union Home Minister Amit Shah Thursday vowed to punish those behind the Delhi riots, irrespective of their religion and party. Speaking during a session on Delhi riots in Rajya Sabha, Shah said, “We won’t spare anybody, irrespective of whichever party or religion they belong to. We will set an example by punishing the rioters.” 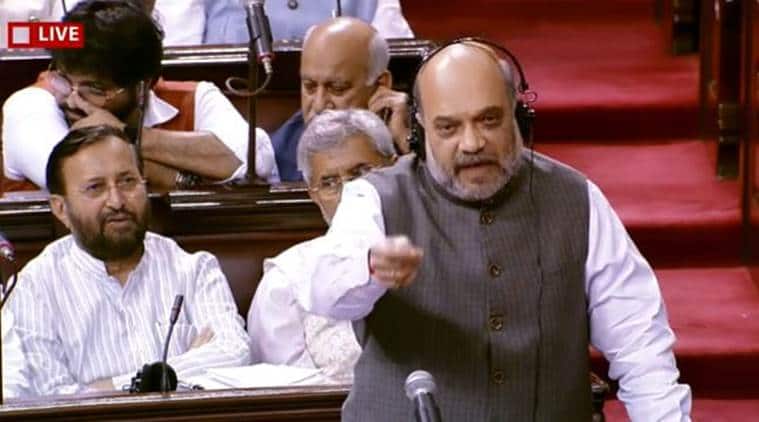 Opposition misled minorities in the name of secularism for years: BJP

People conspired to spread rumours and instil insecurity among the Muslims, says BJP's Bhupender Yadav. He lashed out at Opposition for misleading the minorities in the name of secularism.

Send team to Kerala to see how it is containing communal violence: IUML'S Abdul Wahab

"Just as the Centre is sending a team to tackle coronavirus in Kerala, I request the Home Minister to send a team to the state to see how we are containing the communal virus," said Abdul Wahab, IUML, Kerala.

AAP MP Sanjay Singh lashed out at the central government saying that the government is against arrests of the rioters. "The judge who orders arrests also gets transferred," he added.

Had there been no Shaheen Bagh, there wouldn't have been any riots: Rajasthan BJP MP Vijay Goel

Terming Shaheen Bagh "communal", "divisive", BJP Rajya Sabha MP from Rajasthan Vijay Goel Thursday blamed the protests there for the riots in Delhi. While speaking in the Rajya Sabha, Goel said, "Had there been no Shaheen Bagh, there would not have been any riots." Anand Sharma asked for a ban on possession of private weapons. He said people responsible for the Delhi riots should be punished irrespective of their parties.

Congress' Anand Sharma said, "CAA lacks constitutional morality and it is the constitutional right of the states to move Supreme Court against it if they want." He added that there are a lot of people who follows religion. "Whoever loves his or her own religion, is also respectful towards other religion," he said. 1984 should not be repeated: SAD's Naresh Gujral on Delhi riots

SAD's Naresh Gujral should put in efforts to remove insecurity's in the minds of the minorites. Bringing in reference to Sikh riots, he said, 1984 should not be repeated in any means and asked the government to ensure that the victims' families get their compensation. BJP's Swapan Dasgupta said, "The atmosphere of hatred was set by the violent protests in Bengal's Kolkata and Ulluberia just after the Citizenship Amendment Act was passed on December 11." "We don't expect Home Minister to resign for his post. He is not Lal Bahadur Shastri. We just expect him to come from the North Block to the Parliament and give a statement," said Tiruchi Siva of DMK.

Elamaram Kareem of CPI(M), said, "Inaction of Home Ministry even after intelligence inputs made the situation worse. Police, who were under the central government, were mere spectators when the hooligans ran riots." TRS leader Banda Prakash requests Amit Shah to take necessary steps and arrest those responsible for the Delhi riots irrespective of which party they belong to. Prakash said the violence was no less than the coronavirus that left Delhi shaken for several days.

Requesting Parliamentarians to help in spreading awareness about coronavirus, Health Minister Dr Harsh Vardhan in Lok Sabha said that the government is taking efforts to contain the spread of infection. External Minister S Jaishankar also said that the government is trying to ensure the well-being of Indians stranded in Iran and Iraq. "There are operational constraints in evacuating Indians as the Iranian system is strict. We will do whatever we must do to check the spread of coronavirus," Jaishankar said, adding that 'exceptional circumstances require exceptional measures'.

Earlier in the morning, Lok Sabha Speaker Om Birla said that there was no proposal to adjourn the House over coronavirus. In Rajya Sabha, meanwhile, Vice President Venkaiah Naidu urged citizens and parliamentarians to adhere to guidelines issued by the Health Ministry to prevent the spread of infection. Later in the day, a fiery exchange is likely to take place in Rajya Sabha as the House debates Delhi riots, that killed over 50 people.

During the discussion on Wednesday in Lok Sabha, the Opposition asked for Home Minister Amit Shah's resignation. He, on the other, hand, vowed not to spare the rioters and called the Delhi riots a conspiracy that had been hatched well in advance and assured Parliament that the rioters, irrespective of which side they belong to, will not be spared. He also defended the Delhi Police which has faced severe criticism for alleged dereliction of duty. The Congress later staged a walkout.

On the Opposition criticism that the government had deliberately delayed a discussion on the Delhi riots in Parliament, Shah said this was done due to the festival of Holi and to give time to the Delhi Police to conduct investigations. “During Holi, sentiments are often high. In the past communal clashes have happened… We just wanted a peaceful Holi.”

Beginning his speech with expressing grief over the deaths in the riots, Home Minister reiterated multiple times that strict action would be taken against anyone behind the violence. “The Narendra Modi government will not spare anyone from any side… A scientific investigation is being conducted. No innocent will face any trouble. They may be called for questioning, but no one will be arrested without evidence,” Shah said.

Elaborating on the “conspiracy” behind the riots, Shah said 300 people had entered from Uttar Pradesh, and referred to speeches made by the AIMIM’s Waris Pathan and former JNU student Umar Khalid. He also obliquely accused the Congress, in particular Sonia Gandhi and Priyanka Gandhi, of inciting violence. He said police were using face recognition software and had identified more than a thousand people through it.

“On December 14, a political party held a rally at Ramlila Maidan. Its leader gave a speech where she made a call for ‘Aar paar ki ladai (fight to finish)’. On December 16, Shaheen Bagh started. Another senior leader of the party said if you don’t get out of your homes now you would be called a coward. Were these not hate speeches?” Shah said, adding that 76% of all riot deaths in the country since Independence had happened in Congress regimes.

The Opposition held the government squarely responsible for the Delhi riots, with the Congress and other parties seeking the resignation of Union Home Minister Amit Shah.

“When Rome was burning, Nero was playing fiddle or flute on Palatine Hill and waiting to see the burning of the city in order to build one golden palace, Domus Aurea. It appears Nero has now arrived in India. When Delhi was burning, Nero was in Ahmedabad playing flute with President Donald Trump,” Congress leader in the Lok Sabha Adhir Ranjan Chowdhury said.