Parliament Winter Session 2019 highlights: Wednesday marked the last day of the Budget session and the conclusion of the 16th Lok Sabha ahead of the General Elections.

Giving his valedictory speech in the Lok Sabha before the general elections, Prime Minister Narendra Modi on Wednesday pointed out that several sessions of the 16th Lok Sabha had good productivity. He said India has long suffered due to fractured mandates but now it is taken seriously because of the majority government. PM Modi also took a veiled dig at Congress president Rahul Gandhi and said,  “there were no earthquakes in the last five years.” He was referring to Gandhi’s statement last year that “there would be an earthquake if he were allowed to speak.”

The Rajya Sabha was adjourned sine die after it passed some Bills including Interim Budget and Finance Bill for 2019-20 without debate. In his customary address at the close of the Budget session, Chairman M Venkaiah Naidu lamented that precious time of the House was lost in protests, stalling proceedings.

A Comptroller and Auditor General (CAG) report with details of the Rafale deal was tabled in the Upper House, but was not taken up for discussion as the House was adjourned sine die. The Citizenship (Amendment) Bill, 2019, and the Muslim Women (Protection of Rights on Marriage) Bill, 2018, are set to lapse on June 3 when the term of the present Lok Sabha ends as they could not be passed in the Rajya Sabha which adjourned indefinitely today.

Parliament live updates: Today is the last day of the Budget session and also marks the conclusion of the 16th Lok Sabha ahead of the General Elections. Track the latest news below.

Members stand up for 'Vande Mataram' in the Lok Sabha. The House has been adjourned sine die.

Taking stock of the work done during the 16th Lok Sabha's tenure, Mahajan said, "We should also think how much was in the service of the people who gave us the mandate to work for them." She also mentioned the departure of former members including Atal Bihari Vajpayee and George Fernandes.

She also expressed her gratitude to PM Narendra Modi, Home Minister Rajnath Singh and leaders of the opposition leaders. Mahajan made special mention of Deputy speaker Thambidurai for trying to ensure a smooth conduct of the proceedings of the House.

Taking a dig at Congress president Rahul Gandhi, PM Narendra Modi said, "no earthquake struck this government in the last five years." He was referring to Gandhi's statement last year that "there would be an earthquake if he were allowed to speak."

It is this Lok Sabha that passed GST: PM Modi

In his valedictory address, Prime Minister Narendra Modi said it was this Lok Sabha that passed stringent laws against corruption and black money.

Heaping praise on the Goods and Services Tax, PM Modi said, "It is this Lok Sabha that passed the GST. The GST process revealed the spirit of cooperation and bipartisanship."

The world is discussing global warming and India made an effort in the form of the International Solar Alliance to mitigate this menace: PM @narendramodi

PM Narendra Modi said several sessions in this Lok Sabha had good productivity.  "This is a very good sign. I appreciate M Venkaiah Naidu Ji, Late Ananth Kumar Ji for their service as Ministers for Parliamentary Affairs," he said.

I want to appreciate the role of Speaker Sumitra Mahajan  in conducting the proceedings of the House: PM Modi begins his remarks in the Lok Sabha

Prime Minister Narendra Modi is giving his final speech in the Lok Sabha before the general elections.

P Karunakaran, CPM, Kasaragod: It is the duty of the opposition to raise the issue, sometimes in the form of shouting. I request Prime Minister Narendra Modi and the House to take more seriously the issues facing Kerala, which is stilling reeling from the effects of the devastating floods.

Mulayam Singh Yadav, SP, Azamgarh: I would like to congratulate Prime Minister Narendra Modi for taking the House together during the 16th Lok Sabha session and wished Modi to become Prime Minister again after the forthcoming election.

The Lok Sabha has reconvened for the post lunch session and Congress leader KC Venugopal is speaking presently.

The Lok Sabha has been adjourned till 3 PM.

Lok Sabha passes The Banning of Unregulated Deposit Schemes Bill, 2018. Finance Minister Piyush Goyal, who moved the Bill in the House, said it has been drafted with great care. The Bill provides a comprehensive mechanism to ban the unregulated deposit schemes and to protect the interest of depositors and for matter connected therewith or incidental thereto, be taken into consideration.

Rajya Sabha Chairman and Vice-President Venkaiah Naidu has adjourned the House sine die after his customary address at the end of the session. The Citizenship (Amendment) Bill and the triple talaq Bill are now set to lapse. The provision regarding lapse of a Bill in the Rajya Sabha Legislative Procedure states: “A Bill pending in Rajya Sabha which has not been passed by Lok Sabha does not lapse on the dissolution of Lok Sabha but a Bill which is passed by Lok Sabha and is pending in Rajya Sabha lapses on the dissolution of Lok Sabha.”

RS passes Motion of Thanks on President's address, Budget and Finance Bill

The Rajya Sabha has passed without debate the motion thanking the President for his address at the start of the Budget session. The House has also passed the Finance Bill, which was cleared by the Lok Sabha yesterday. The interim Budget was also passed by the House without debate.

In the Finance Bill, 2019, the government has proposed to raise tax rebate for people having annual income up to Rs 5 lakh from Rs 2,500 to Rs 12,500, which will effectively ensure that they don’t have to pay any tax. Standard deduction has also been raised from Rs 40,000 to Rs 50,000, besides a host of tax benefits to home buyers, reports PTI.

Union minister Arun Jaitley, taking to Twitter, says "the lies of the ‘Mahajhootbandhan’ stand exposed" by the CAG report on Rafale. "'Satyameva Jayate' – the truth shall prevail. The CAG Report on Rafale reaffirms the dictum.

How does democracy punish those who consistently lied to the nation?" he tweets. "2016 vs. 2007 terms – Lower price, faster delivery, better maintenance, lower escalation. It cannot be that the Supreme Court is wrong, the CAG is wrong and only the dynast is right," Jaitley adds.

CAG report on Rafale in Parliament: What does the report disclose?

The CAG report on the Rafale deal, which was tabled in the Rajya Sabha a while ago, says India saved 17.08 per cent money for the India Specific Enhancements while purchasing 36 Rafale aircraft from France, as compared to the 126 aircraft deal negotiated by the UPA government. It adds that the delivery schedule of the first 18 Rafale aircraft is better than the one which was proposed in the 126 aircraft deal, reports news agency ANI. The Rajya Sabha will resume in a few minutes.

Not just the Congress, the Telugu Desam Party (TDP) and the Trinamool Congress (TMC) staged protests outside Parliament this morning. The TDP has been urging the Centre to grant Andhra Pradesh special status. In fact, The Indian Express reports that a draft report prepared by the Parliamentary Standing Committee on Home Affairs is learnt to have recommended special status to the state. (Express Photos: Anil Sharma) 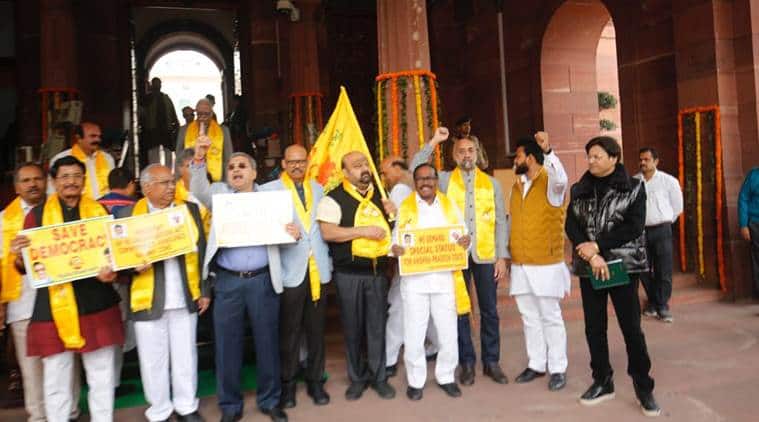 A Comptroller and Auditor General (CAG) report with findings on the Rafale deal has been tabled in the Rajya Sabha. The Performance Audit on “Capital Acquisition in Indian Air Force” details its findings in the deal between India and France over the acquisition of 36 Rafale aircraft at a cost of Rs 58,000 crore in April 2015. The Upper House was adjourned minutes after the report was tabled. Welcome to our live blog on Parliament. The Lok Sabha and the Rajya Sabha have been adjourned within minutes due to disruptions by members. The CAG report on the Rafale deal was tabled in the Rajya Sabha amid ruckus. Today marks the last day of the Budget session, and also signals the the conclusion of the 16th Lok Sabha ahead of the General Elections. Follow our blog through the day for the latest news and updates. Wednesday marks the last day of the Budget session of Parliament. This also means that today marks the end of the 16th Lok Sabha ahead of the General Elections. The session, which began on February 1 with the presentation of the Union Budget by Finance Minister Piyush Goyal, has seen 10 sittings each.