A day after International Court of Justice ruled that Pakistan must review the death sentence for Indian national Kulbhushan Jadhav, Minister of External Affairs S Jaishankar made a statement on the court verdict in the Rajya Sabha today. He said the ICJ’s verdict has vindicated India’s stand and exposed Pakistan.

“Kulbhushan Jadhav is in “illegal” custody of Pakistan under “fabricated” charges,” said EAM S Jaishankar. He called ICJ judgement “vindication of not only Jadhav but all those who believe in rule of law.”

In another crucial development, the Finance Bill, 2019 was passed in the Lok Sabha today. The bill, which was moved by Finance Minister Nirmala Sitharaman, gives effect to the financial proposals of the Central Government for FY 2019-2020. In the Rajya Sabha today, Minister of Women and Child Development Smriti Irani introduced the Protection of Children from Sexual Offences (Amendment) Bill 2019. The upper house also passed two Arbitration Bills today which were introduced by Union Law Minister Ravi Shankar Prasad. The New Delhi International Arbitration Centre Bill, and Arbitration and Conciliation (Amendment) Bill 2019 were introduced today. The bills stand for the purpose of creating an independent and autonomous regime for institutionalised arbitration.

Congress raises in LS issue of crimes against women in Delhi

The Congress on Thursday targeted the government over incidents of crime against women in the national capital. Raising the issue during the Zero Hour, Adhir Ranjan Chowdhury said, "I want to know what the government is thinking to deal with the matter".

He said that several rape cases have been reported in Delhi. "This is happening in the place where Prime Minister and President are residing," he said adding such crimes are happening everyday in Delhi.

Kanimozhi (DMK) raised the issue of approval of National Medical Commission (NMC) Bill which seeks to replace the Medical Council of India Act, 1956. She said the government should stop all-India examinations. (PTI)

Bills to speed up arbitration process in India gets RS nod

Parliament on Thursday passed a bill to set up an independent and autonomous regime for institutionalised domestic and international arbitration in India.

The New Delhi International Arbitration Centre (NDIAC) Bill, 2019, which seeks to replace an ordinance issued in March this year by the previous government, was passed by Rajya Sabha. The Bill was already passed by Lok Sabha on July 10.

The Bill provides for setting up an independent and autonomous regime for institutionalised domestic and international arbitration and to acquire and transfer undertakings of the International Centre For Alternative Dispute Resolution (ICADR) to the New Delhi International Arbitration Centre (NDIAC) with effect from March 2 this year. (PTI)

The Arbitration and Conciliation Bill and New Delhi International Arbitration Centre Bill were passed in the upper house following a voice vote.

Rajya Sabha adjourned till 11 am on July 19, Friday

The proceedings of the upper house have been adjourned till July 19, tomorrow.

Union Law Minister Ravi Shankar Prasad is responding on the Arbitration (Amendment) Bill in Rajya Sabha now. The law minister had introduced the bill in the upper house today.

Meanhwhile, in the lower house, a discussion is underway on the matters of urgent public importance. NK Premachandran is in the chair.

Finance Minister Nirmala Sitharaman on Thursday said that the tax proposals in the Finance Bill 2019 are aimed at improving the ease of living and reducing pain of the citizens.

While replying to discussion on the Finance Bill, Sitharaman said Budget proposals will promote Make in India and digital payment.

The Bill was later passed by the Lower House by voice vote. The Minister, however, did not relax the tax proposals with regards to Foreign Portfolio Investors, TDS on cash withdrawal above Rs 1 crore from banks and hike in customs duty on newsprint as was being demanded by opposition.

Referring to imposition of 1 per cent TDS on cash withdrawal beyond Rs 1 crore, she said the tax could be adjusted against the liability of the assesses and hence there will be no additional burden on them. (PTI)

The Finance (No 2) Bill, 2019, which was introduced by Finance Minister Nirmala Sitharaman in Lok Sabha today, was cleared after a voice vote.

While replying to the Finance Bill in the Lok Sabha today, Finance Minister Nirmala Sitharaman talked about PMLA, linking of PAN with Aadhaar and other issues.

Currently,  voice vote is underway in the Lok Sabha for Finance Bill (2019) which was introduced by Finance Minister Nirmala Sitharaman today. Sitharaman is moving amendments in the bill. The bill is getting a mixed response from the members in the house.

Finance Minister Nirmala Sitharaman is speaking on the Finance Bill in Lok Sabha. Earlier in the day, Sitharaman had moved Finance Bill, 2019 that gives effect to the financial proposals of the Central Government for FY 2019-2020.

Chidambaram speaking on the Arbitration (Amendment) Bill in Rajya Sabha

Senior Congress leader P Chidambaram is currently speaking on The New Delhi International Arbitration Centre Bill, 2019 in the upper house. He said that the setting up of an Arbitration Centre in New Delhi will make it a mere bureaucratic office and would not be able to meet the real goal.

What is Arbitration and Conciliation (Amendment) Bill 2019?

A bill aimed at improving institutional arbitration by providing for settlement of commercial disputes within six months and other measures was introduced in Rajya Sabha on July 15 by Law Minister Ravi Shankar Prasad.

The Arbitration and Conciliation (Amendment) Bill 2019 seeks to make India a hub of domestic and global arbitration for settling commercial disputes.

A previous bill was cleared by Lok Sabha in August 2018 but could not be passed by Rajya Sabha. The bill lapsed following the dissolution of the 16th Lok Sabha.

Successive governments have been pushing to make India a centre of domestic and international arbitration.

The new bill, which amends the 1996 Act, seeks to provide for a robust mechanism to deal with institutional disputes and ensures accountability of the arbitrator.

The amendments will facilitate achieving the goal of improving institutional arbitration by establishing an independent body to lay down standards, make arbitration process more friendly and cost-effective, and ensure timely disposal of cases.

It provides for setting up of an independent body -- Arbitration Council of India (ACI) -- to frame arbitral institution and accredit arbitrators by laying down norms. (PTI)

The government Thursday admitted in the Rajya Sabha that there has been a data leak of unemployment figures and said efforts were being made to ascertain who was behind it.

Replying to queries during Question Hour, Minister of State for Planning and Statistics Rao Inderjit Singh termed the issue as "serious" and said data pertaining to unemployment figures was leaked ahead of its announcement in May this year.

He also informed members that the government has changed the methodology for ascertaining unemployment rates as a periodic survey is now being held every year based on quarterly data, against the five-year surveys earlier. (PTI)

In RS now: Discussion on The Arbitration and Conciliation (Amendment) Bill, 2019

The legislative business in Rajya Sabha is underway as discussion on The Arbitration and Conciliation (Amendment) Bill, 2019 is taking place for consideration and passing. JD(U), Bihar member Ram Chandra Prasad Singh is currently speaking on the issue. In the chair is Tiruci Siva.

Professor Saugata Roy, AITC, Dum Dum (West Bengal) is currently speaking on The Finance (No 2) Bill 2019 in the lower house. This bill also contains amendment to the GST legislation. The Bill is to give effect to the financial proposals of the Central Government for the financial year 2019-2020.

Finance Minister Nirmala Sitharaman moved the Finance bill, said that the finance bill will look into the taxation process keeping in mind the agenda of 'Make in India'.

Oppposing the bill, leader of opposition, Adhir Ranjan Chowdhury said that earlier amendments to the Finance Bill 2017 are in the Supreme Court to test the constitutional validity of those amendments. He asked Minister to reconsider the decision to tax pension of soldiers with disability.

As soon as listed papers were laid and External Affairs Minister S Jaishankar made a statement on the ICJ verdict on the Kulbhushan Jadav case, Congress and SP members were up on their feet raising their respective issues. Chairman M Venkaiah Naidu did not allow Congress leader Anand Sharma's point of order on the Supreme Court judgement on the Karnataka issue as well as the notice given by SP leader Ramgopal Yadav under Rule 267 seeking suspension of business to take up the issue of deteriorating law and order in UP.

SP and Congress members rushed into the well of the House shouting slogans, forcing Naidu to first order stoppage of transmission of proceedings on television and then adjourn the proceedings till 1200 hours. Sharma said the Supreme Court order of Wednesday that the 15 rebel Members of Legislative Assembly (MLA) of the Congress-Janata Dal (Secular) government in Karnataka cannot be forced to take part in Assembly proceedings, was in "clear violation of the Constitution."

He cited the 10th Schedule of the Constitution that states that a MLA or MP would incur a disqualification if he votes/abstains from voting against the party directions. He wanted a ruling from the Chair on the issue. Naidu said the matter was not before the House but he would give a ruling later.

Lok Sabha continues with Question Hour. MoS Hardeep Singh Puri is answering questions pertaining to his civil aviation ministry. Will there be any flights connecting Delhi to Agartala? We have 12 flights plying between two cities, even after Spice Jet and Jet Airways have closed their service, he said.

Meanwhile, in Karnataka, the political drama in the state will likely reach its climax as the H D Kumaraswamy government faces a floor test in the state legislative Assembly. Moving the motion for a trust vote, Kumaraswamy initiates a debate in the Assembly. Kumaraswamy reads out the petition filed by rebel MLAs in the Supreme Court. "The legislators have forgotten to conduct themselves properly by making such false allegations against our stable government in the apex court." He adds that clarification is needed on these allegations.

Rajya Sabha Chairman M Venkaiah Naidu on International Court of Justice (ICJ) verdict on #KulbhushanJadhav: I am very happy that the entire House is together in welcoming the ICJ judgement. Hope we will pursue till Shri Kulbhushan is discharged and released. pic.twitter.com/DCiodHtQ4x

Kulbhushan Jadhav in "illegal" custody of Pakistan under "fabricated" charges, says EAM S Jaishankar in Rajya Sabha. "Kulbhushan Jadhav's family has shown exemplary courage in difficult circumstances. I can assure the govt will vigorously continue its efforts to ensure his safety and well being, as well as his early return to India," the EAM added.

Jaishankar further added that ICJ has directed that Pakistan is under an obligation to inform Jadhav without further delay of his rights & to provide Indian consular officers access to him in accordance with Vienna Convention.

EAM S Jaishankar on #KulbhushanJadhav verdict, in Rajya Sabha: The International Court of Justice (ICJ) by a vote of 15-1 upheld India's claim that Pakistan is in violation of Vienna Convention on several counts. pic.twitter.com/fFfuB5KF7c

Congress Party has given Adjournment Motion Notice in Lok Sabha over "alarming situation due to spurt in crime in Delhi" pic.twitter.com/w26W0i8ufy

Parliament proceedings to begin at 11 am

Welcome to our LIVE blog. Today in Lok Sabha, Minister of External affairs S Jaishankar will discuss ICJ's verdict on Kulbhushan Jadhav while in Rajya Sabha, Minister of Women and Child Development Smriti Irani will introduce the Protection of Children from Sexual Offences (Amendment) Bill 2019. 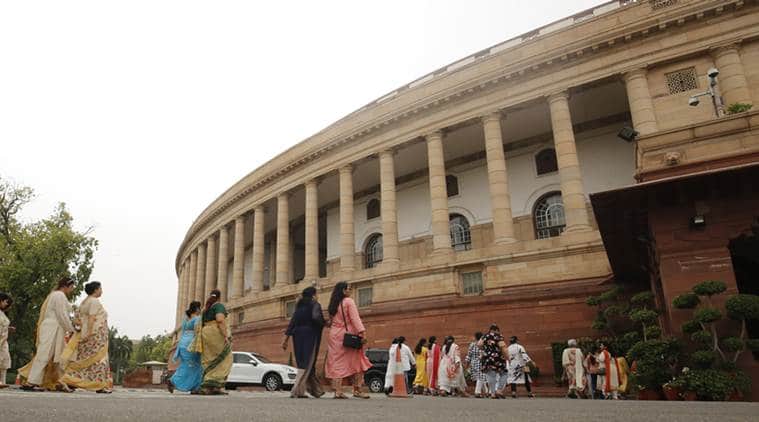 LS Speaker Om Birla commenting over the thin attendance in the evening session, appealed to the members of the House to spend maximum in the House and benefit from the debates. (File)

Meanwhile, in the Lok Sabha, Minister of State for Home Affairs G Kishan Reddy made a statement on “Security Situation in the North Eastern States of India.”