Parliament Kashmir issue LIVE updates: Home Minister Amit Shah also put forth a statement informing that Ladakh will now be given the status of Union Territory, while Jammu and Kashmir will be a separate Union Territory.

Amid the confusion over the deployment of security forces and the imposition of Section 144 in Jammu and Kashmir, Home Minister Amit Shah scrapped Article 370 on the floor of Rajya Sabha Monday. “Not all provisions of Article 370 will be applicable in Kashmir,” he said. The proposal evoked massive protest from the Opposition which asked the Union government to roll back the order.

Discussions on matters of public importance underway in Lok Sabha

Ravi Kishan proposes six months of compulsory training in self-defence in schools across the country. Discussions on matters of public importance underway in Lok Sabha.

The Jammu and Kashmir Reorganisation Bill was passed in Rajya Sabha

The Jammu and Kashmir Reorganisation Bill was passed in Rajya Sabha on Monday. The bill seeks to divide the state of J&K into two Union Territories — Ladakh and Jammu & Kashmir. Rajya Sabha adjourned for the day.

When situation gets normal, we're ready to make J&K a state: Amit Shah

Amit Shah: Several MPs have asked how long will J&K remain a union territory. I want to assure them when the situation gets normal and the right time comes, we're ready to make J&K a state again. It may take a little longer, but it will become a state once again, one day.

Amit Shah: The proposals I have brought in today are, to my understanding,  the solution to the Kashmir issue.

Even as the government on Monday modified Article 370, which gives special status to Jammu and Kashmir, and moved a bill to bifurcate the state into two separate union territories, it received support in the Parliament from unlikely quarters, with staunch critics like Mayawati’s BSP and Aam Aadmi Party (AAP) backing the move. Read more 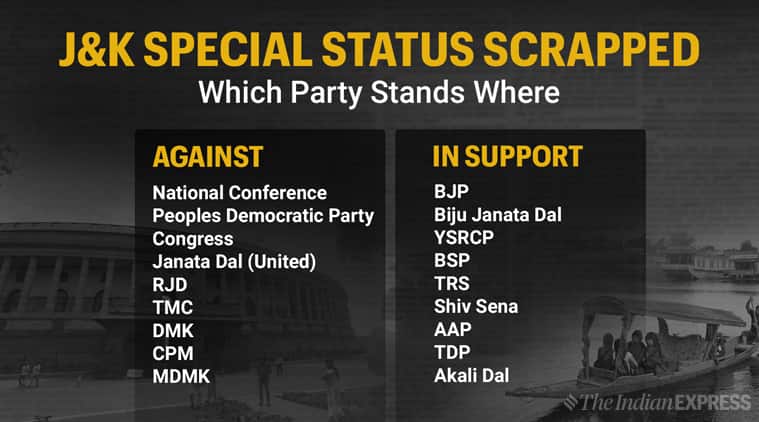 Step a result of lot of consultation: Sitharaman

Nirmala Sitharaman said, "It is a historic debate. The step is a result of a lot of consultation. Why should special status of Jammu & Kashmir start and end with discrimination towards women, lower castes?"

Kapil Sibal: History will tell whether Article 370 was a blot on history... Is democracy run only by numbers? Without any notice, without any prior intimation, you bring a bill in th Parliament and ask the members to deliberate upon it. How can the members discuss the bill when they don't know what is there in it. The truth is that you don't want any discussion or suggestion.

Chidambaram: What you are doing today is sending a very very wrong signal to all the states of this country... For heaven's sake, don't dismember the state of Jammu & Kashmir... Don't commit that cardinal sin, monumental blunder.

Chidambaram: Same provisions, same methods, same resolutions can be applied to any state

Chidambaram: What you are doing to Jammu and Kashmir can be done to any other state. You are dismembering the state. Same provisions, same methods, same resolutions can be applied to any state.

You cannot modify Article 370 by an order under Article 370: Chidambaram

Chidambaram: You are reducing states to colonies and are thinking what you are doing is constitutional? ...I think you have forgotten that you cannot modify Article 370 by an order under Article 370.

Future generations will realise what a grave mistake this house is making today: Chidambaram

"This is a very sad day. In the constitutional history of India, it is a black day," says P Chidambaram. "One of the honourable members has said you have corrected an injustice. History will prove you to be wrong and future generations will realise what a grave mistake this house is making today," P Chidambaram said.

NCP decides to abstain from voting on scrapping of Article 370

NCP has decided to abstain from voting on scrapping of Article 370.

Article 370 was a miscarriage of history: Rajendra Singh, MoS PMO

Article 370 was a miscarriage of history and this atonement (repeal of the article) of was needed, Minister of State (Independent Charge) for the Ministry of Development of North Eastern Region and Minister of State for Prime Minister's Office Rajendra Singh said.

What made you end statehood of J&K: SP leader Ram Gopal Yadav

Was there any constitutional compulsion to end the statehood of Jammu & Kashmir, asked SP leader Ram Gopal Yadav. Even though AAP is supporting the move of appointing a Lt Governor in J&K, Delhi government (run by the party) itself remains disturbed by the interference of th LG there, he added.

Integration isn't possible through law, but only through the passage of heart: Ghulam Nabi Azad

Integration isn't possible through law, it is only possible through the passage of heart, said Ghulam Nabi Azad. He said the NDA government has put an end to all the integration (of people of J&K with the rest of India) that was taking place in the past 30-35  years. "It is shameful that the you have made Jammu & Kashmir a non-entity by appointing a Lt Governor there, so that you can appoint even a peon or a clerk, sitting here (in Delhi)," he said.

Ghulam Nabi Azad: No one expected all the worst fears about J&K will come true within a day

Ghulam Nabi Azad: For the last few days, Jammu and Kashmir, and Ladakh were tensed with a host of rumours flying all over. There were fears of Article 370 being scrapped, bifurcation of the state among many others. But, no one in the world, had expected all of these fears to come true together.

BJP revoked Article 370 for votes, it is playing with unity and integrity of state, Congress leader Ghulam Nabi Azad said outside Parliament. (PTI)

Meanwhile, PDP's Rajya Sabha MPs Nazir Ahmad Laway and Mir Mohammad Fayaz were seen wearing black bands at the Parliament area, as a mark of protest against the situation in Kashmir.

On Friday the Lok Sabha passed the Dam Safety Bill aiming to institute uniform safety procedures for dams in India. If the bill is made into a law, then dam owners will have to provide a dam safety unit in each dam. The dam safety unit will be required to inspect the dam before and after the monsoon session, and also during and after natural disasters such as earthquakes and floods.