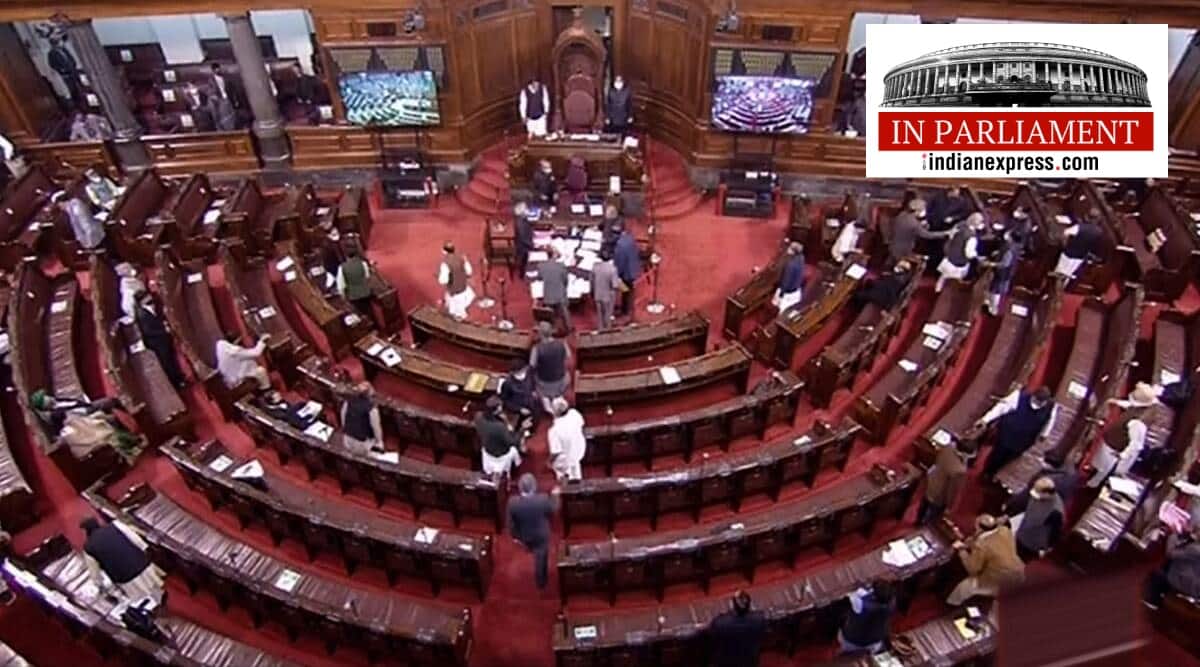 Initially listed in the name of Union Home Minister Amit Shah, the Bill was finally introduced by Union MoS for Home Affairs Ajay Mishra to protests by the Opposition, which described it as “draconian”.(File Photo)

Parliament Highlights: Congress MP from Tamil Nadu Manickam Tagore asked the central government to provide assistance in the form of food to Tamils who are coming to India from Sri Lanka as the economic crisis rises in the island country. Tagore said that due to food shortages in Sri Lanka amid the economic crisis, Tamils have been turning up at the shore of Tamil Nadu.

Lok Sabha on Friday passed the Finance Bill which will be bringing in new taxation and completing the Budgetary exercise for 2022-2023. The bill was passed after 39 official amendments by Nirmala Sitharaman were accepted and several by the Opposition were rejected. Speaking on the Finance Bill, Sitharaman said that India was the only country that had not brought in new taxes to recover from the economic effects of the Covid-19 pandemic.

Rajya Sabha proceedings were adjourned briefly during the morning session on Friday amid an uproar after BJP MP Roopa Ganguly raised the Birbhum incident in West Bengal in which eight people were charred to death. Breaking down while addressing the violence in West Bengal, Ganguly said, “We demand President’s rule in West Bengal. Mass killings are happening there, people are fleeing the place.”

The government on Friday said it is in the process of analysing the impact of sanctions on Moscow for India-Russia bilateral trade and economic cooperation.

The US and several Western countries have imposed crippling economic sanctions on Russia for its invasion of Ukraine.

"Many countries have imposed sanctions on Russia due to the conflict. These are expected to have an impact on the global economy, including through disruption of supply chains. Its impact on energy and commodity prices is already visible," Minister of State for External Affairs Meenakashi Lekhi said. (PTI)

A Congress MP from Tamil Nadu on Friday demanded that the central government extend assistance in the form of food items to Tamils from Sri Lanka amid an economic crisis plaguing the island nation.

Raising the issue in Lok Sabha during the Zero Hour, Manickam Tagore said due to food shortage in Sri Lanka, Tamil refugees have started reaching the shores of Tamil Nadu.

Claiming that prices of food items are sky-rocketing in Sri Lanka, he demanded that the government send food for Tamils of that country.

He also demanded assistance to the Tamil Nadu government to help it take care of the Tamil refugees reaching the state. (PTI)

Govt should come out with legislation on crypto soon: Gogoi

Expressing concern over unregulated virtual digital assets such as cryptocurrencies, Congress MP Gaurav Gogoi Friday said the government should come out with a legislation soon to prevent their misuse for purposes such as terror financing and drug smuggling.

Initiating a debate on the Finance Bill in Lok Sabha, he said the government is still sending mixed signals on virtual digital assets, and asserted there should be clarity on the definition of crypto.

It is not clear if it is an asset, currency or something that can be speculated upon, he said. (PTI)

The Lok Sabha on Friday approved the Finance Bill, which gives effect to new taxation, thus completing the Budgetary exercise for 2022-23 fiscal.

The Finance Bill was approved by the Lower House after accepting 39 official amendments moved by Finance Minister Nirmala Sitharaman and rejecting the amendments proposed by the opposition by voice vote.

Replying to a discussion on the Finance Bill, Sitharaman said India was probably the only country that did not resort to new taxes to fund the recovery of the economy hit by the Covid pandemic. (PTI)

Swadhar Grehs, which cater to primary needs of women in difficult circumstances, do not have a low occupancy and at the all-India level, they had 76.2 per cent residency during 2021-22, the government said on Friday.

Responding to a question in Lok Sabha, Women and Child Development Minister Smriti Irani said most of the Swadhar Grehs are running in the rented buildings. (PTI)

JD(U) leader Rajiv Ranjan Singh on Friday objected to Law Minister Kiren Rijiju's reply in Lok Sabha to a question on voting rights of prisoners, saying he should be mindful of facts and sensitivity of questions while answering them.

This came after the minister, while replying to a question by LJSP member Chandan Singh, said every elector has the right to vote in elections in the country and those in prisons are also encouraged to vote but voting cannot be made compulsory for the electors.

"Minister said that anyone, either in jail or out of jail, has right to vote. In my understanding it is beyond facts," Rajiv Singh, who is also the JD(U) president, said while objecting to the minister's reply during the Question Hour When a person is sent to judicial custody, his fundamental rights are seized and voting is a fundamental right, he said. (PTI)

Over 800 projects worth Rs 5.48 lakh cr identified for implementation under Sagarmala programme: Min

More than 800 projects at an estimated cost of around Rs 5.48 lakh crore have been identified for implementation as a part of the Sagarmala programme, Parliament was informed on Friday.

In a written reply to the Lok Sabha, Minister for Ports, Shipping and Waterways Sarbananda Sonowal said 14 projects related to the development of new ports with an estimated investment of Rs. 1,25,776 crore are part of the Sagarmala Programme.

Govt says no state has reported deaths due to oxygen shortage

Few states and union territories have responded to the Centre's requests to furnish details on COVID-19 mortalities due to oxygen shortage and none of them have reported confirmed deaths due to it, Minister of State for Health Bharati Pravin Pawar informed Parliament said on Friday.

The government maintains data of Covid-19 cases and deaths reported by states and union territories.

Accordingly, the Union government has requested states and union territories to furnish details of suspected deaths due to oxygen shortage, Pawar said in a written reply to a question in Lok Sabha.

"Few states and UTs have responded and none of them has reported confirmed death due to oxygen shortage," the minister said.

No space for hate crime… if it is there, it has to be rooted out: SC
Adani-Hindenburg fallout: What you need to know today
Over 37, 000 victims of chit fund scams get Rs 30 crore back in Chhattisgarh
With eviction drive, BJP has turned Jammu and Kashmir into Afghanistan, s...
LCA Navy makes maiden landing on indigenous aircraft carrier INS Vikrant
More from India >>
Study says heart diseases contribute 28 per cent of total deaths in India in 2016: Govt

A study has said that heart diseases contributed over 28 per cent of the total deaths in India in 2016, compared to 15.2 per cent in 1990, the Lok Sabha was informed on Friday.

The government also told the lower house that non-communicable diseases are estimated to account for 63 per cent of fatalities in the country.

Union Minister of State for Health Bharati Pawar said the study -- The changing patterns of cardiovascular diseases and their risk factors in the States of India: The Global Burden of Disease Study 1990-2016 -- was published in the Lancet Global Health 2018 by the Indian Council of Medical Research (ICMR). (PTI)

RS proceedings adjourned briefly amid uproar after BJP member raises Birbhum incident
Rajya Sabha proceedings were adjourned briefly during the morning session on Friday amid a uproar after BJP MP Roopa Ganguly raised the Birbhum incident in West Bengal in which eight people were charred to death.
The BJP member, in her Zero Hour mention, termed the incident a case of mass murder.
This led to a protest by members of the TMC, the ruling party in West Bengal, and some of them trooped in the Well of the House.
Treasury benches members too raised counter-slogans. (PTI)
Rajya Sabha: BJP MP Roopa Ganguly breaks down over Birbhum violence

BJP MP Roopa Ganguly on Friday broke down in the Rajya Sabha while addressing the violence that broke out in West Bengal's Birbhum district earlier this week. "We demand President's rule in West Bengal. Mass killings are happening there, people are fleeing the place... the state is no more liveable," she said.

BJP MP Roopa Ganguly breaks down in Rajya Sabha over Birbhum incident, said "We demand President's rule in West Bengal. Mass killings are happening there, people are fleeing the place... the state is no more liveable." pic.twitter.com/tPzp30loAi

Highlighting that ‘Cooperative Societies’ is a State subject under the Constitution, a parliamentary standing committee has advised the newly created Cooperation Ministry, which is headed by Amit Shah, to “exercise utmost prudence” in chalking out activities and programmes at the national level so that federal features of the country are not “impinged upon”.

Explained: What is the reason for the large number of vacancies in the IAS?

Minister of State for PMO; Personnel, Public Grievances and Pensions Jitendra Singh told Lok Sabha on Wednesday that as on January 1, 2021, there were 5,231 IAS officers in the country — 1,515 (22.45 per cent) fewer than the sanctioned strength of 6,746. A total 3,787 officers were direct recruits to the IAS, while 1,444 were promotees (State Civil Services/ non-SCS).

On Thursday, the Department-Related Parliamentary Standing Committee on Public Grievances, Law and Justice headed by Sushil Kumar Modi in its 112th report tabled in both Houses of Parliament said: “…There is a huge shortage. The gap between the sanctioned strength and the in-position strength of IAS officers is as large as 104 in UP cadre, 94 in Bihar cadre and 87 in AGMUT cadre.”