Budget Session 2022 Highlights: Lauding India’s fight against the novel coronavirus, President Ram Nath Kovind, while addressing the Budget Session of the Parliament, said: “India’s capability to fight Covid-19 was evident in its vaccination program. In less than a year, we made a record of administering over 150 crore doses of vaccine. Today, we’re one of the leading nations in the world when it comes to the number of doses given.”

Addressing the nation ahead of the Parliament’s Budget Session, Prime Minister Narendra Modi, while welcoming all legislators, said the session would showcase India’s economic growth to the world. “In today’s global situation, there are a lot of opportunities for India. This session instils confidence in the world regarding the country’s economic progress, vaccination program, and Made in India vaccines,” the PM added.

The first leg of the Budget Session of Parliament starts today in the middle of a high-octane campaign for Assembly elections in five states. The session starts with the President’s address, which, according to the schedule of the Lok Sabha, will take place in the Central Hall at 11 am.

Half-an-hour after President’s address, the Lok Sabha will sit for the transaction of business. The Budget session is scheduled to conclude on April 8, wherein the first part will run till February 11. There’ll be a break from February 12 to March 13 as the standing committee examines the budgetary allocations.

Economic Survey pegs industrial growth at 11.8 per cent in FY22

India’s industrial sector, which was marred by disruptions due to the Covid-19 pandemic, is likely to record a growth of 11.8 per cent in 2021-22, the economic survey has said. Though the performance of the slowed down during the year, it offers some prescriptions: a gradual unlocking of the economy and plans such as the production linked incentive (PLI) scheme for various sectors, along with other policy initiatives such as emergency credit line guarantee to micro, small, and medium enterprises will help aid the pace of recovery.

“The pace of this recovery and further growth is likely to continue due to consistent efforts of the government to bring in various structural, fiscal and infrastructural reforms in addition to a slew of measures/schemes like the production linked incentive scheme (PLI) to support industries,” the survey noted. Read more

Economic Survey in 5 points: Nurturing a post-covid recovery and the risk factors

Setting the tone for the Union Budget 2022-23, to be presented on Tuesday, the Economic Survey 2021-22 tabled in the Parliament on Monday stressed on the need for the government to provide a buffer against stresses such as the uncertainty in the global environment, the cycle of liquidity withdrawal by major central banks, etc. Click here to read the five significant pointers from the Survey that set the stage for the upcoming Budget

Union Finance Minister Nirmala Sitharaman tabled the Economic Survey 2021-22 in the Lok Sabha on Monday. The survey shows an expected 8-8.5 per cent growth rate for the economy in the 2022-23 fiscal year, down from the estimated 9.2 per cent GDP expansion as projected by the National Statistical Office.

First batch of women cadets to be part of NDA by June, President Kovind tells Parliament

President Ram Nath Kovind, while addressing the Parliament ahead of the Budget session on Monday, said the first batch of women cadets will be admitted to the Pune-based National Defence Academy in June this year. “To increase the learning capabilities of the daughters of the country, a Gender Inclusion Fund has been allocated in the National Education Policy. It is a matter of pride that all the present 33 Sainik Schools in the country have started admitting girls. The government has also approved admission of women cadets in the National Defence Academy. The first batch will be admitted in June 2022,” the President said. Read More

Listing measures that the government has taken to improve education in the country, President Ram Nath Kovind said: “Several important steps taken to provide better opportunities in education, health and employment to people of Jammu and Kashmir. Work is underway on 2 AIIMS, besides 7 medical colleges there.”

Listing out how the government has taken numerous measures to empower women, President Kovind said: “Women empowerment is one of the top priorities of my government. We're witnesses to the success of the Ujjwala Yojana. Through the Mudra Yojana, the entrepreneurship and skills of women have received a boost. With “Beti Bachao, Beti Padhao”, many positive results have come to the fore. Also, in an attempt to provide an equal status to the sons and daughters, my government has presented the Bill to increase the minimum age of marriage of women from 18 to 21 years.”

The President went on to say: "My govt is also running PM Svanidhi Yojana to benefit the street vendors. So far, 28 lakh street vendors have received monetary support worth over Rs 2,900 crore. The Centre is now connecting these vendors via online companies. We can also see the impact of the manner in which my government linked Jan Dhan-Aadhaar-Mobile, JAM trinity, to citizen empowerment. Thousands and thousands of people have received direct cash transfers during the pandemic."

The President also went on to praise the Central government for its welfare schemes. “To ensure that no one returns home hungry, my govt distributed free ration to the poor every month as part of the PM Gareeb Kalyan Yojana. Today, India is running the world's largest food distribution program. Also, the Ayushman Bharat card has benefitted the poor. Availability of medicines at low prices at Jan Aushadi Kendra was also a great move.”

Lauding India’s fight against the novel coronavirus, the President said: “India's capability to fight Covid-19 was evident in its vaccination program. In less than a year, we made a record of administering over 150 crore doses of vaccine. Today, we're one of the leading nations in the world when it comes to the number of doses given.” 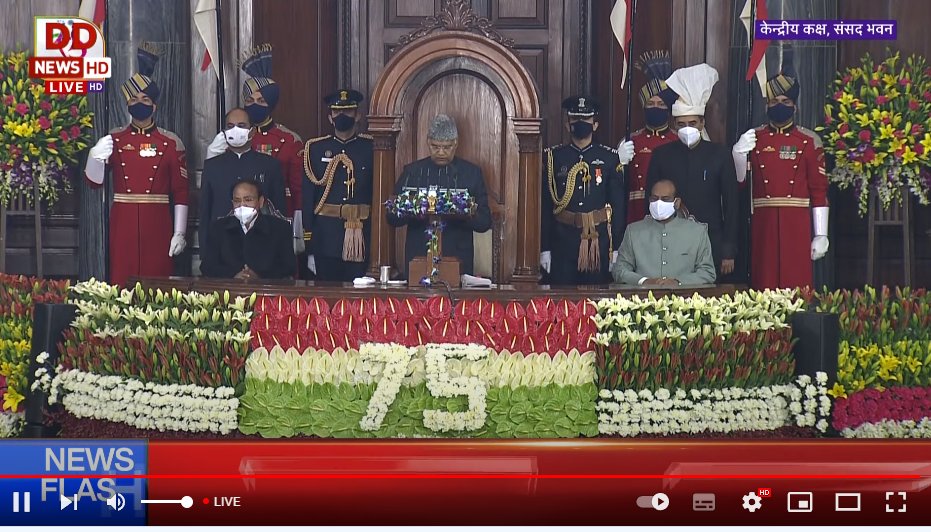 Addressing the Parliament ahead of the Budget Session, President Ram Nath Kovind said: “I bow down to the freedom fighters who prioritised their duties and helped India get its rights. I also respectfully remember the personalities who contributed to the development of India in the 75 years of Independence.” 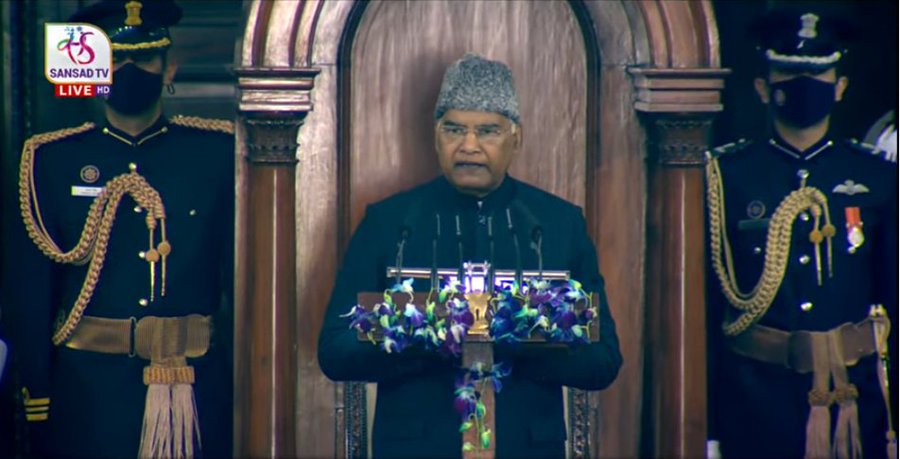 Request all MPs to not miss Budget Session while campaigning for Assembly polls, says PM Modi

Requesting legislators to not miss the Session while campaigning for the elections, the Prime Minister said: “It is true that polls affect Sessions and discussions. But I request all MPs that elections will go on but the Budget Session draws a blueprint for the entire year. The more fruitful we make it, the better our economic progress will be.” 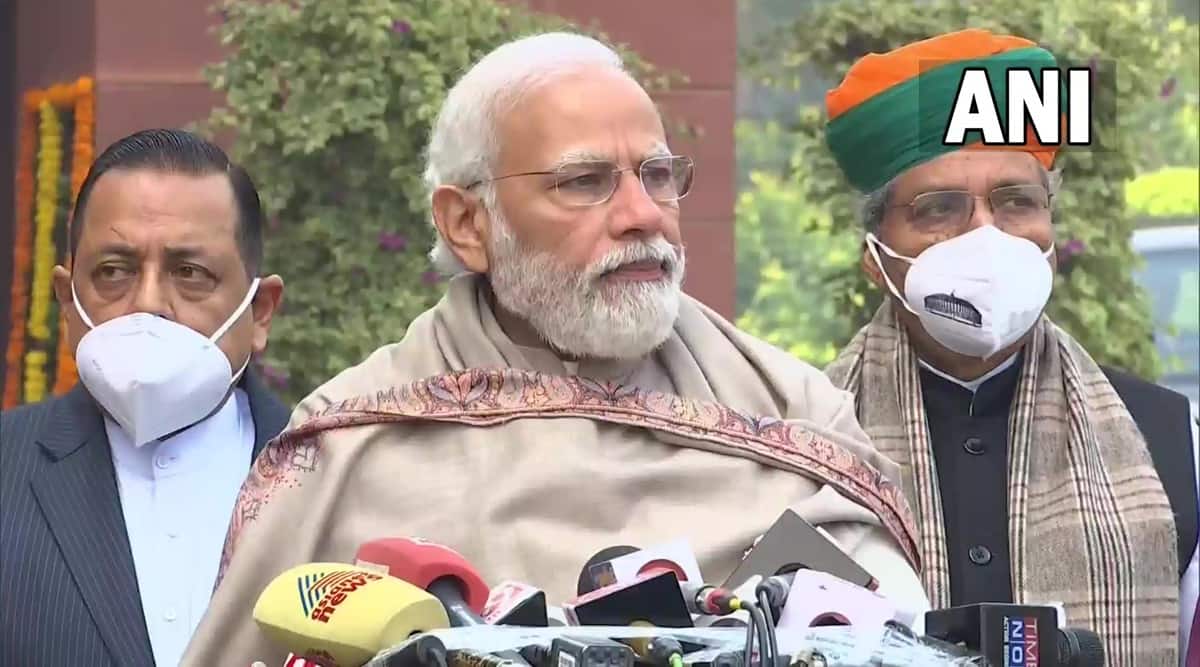 Addressing the nation ahead of the Parliament’s Budget Session, Prime Minister Narendra Modi, while welcoming all legislators, said the session would showcase India’s economic growth to the world. “In today's global situation, there are a lot of opportunities for India. This session instils confidence in the world regarding the country's economic progress, vaccination program, and Made in India vaccines,” the PM added.

Congress leader Mallikarjun Kharge, before the start of the Budget Session, says: “The Central government is not ready to discuss issues that are affecting our country, like unemployment, crimes against women and Dalits, and inflation among others. Also, we will be raising the Pegasus issue even though the Centre accuses the Opposition of not letting Sessions function.” 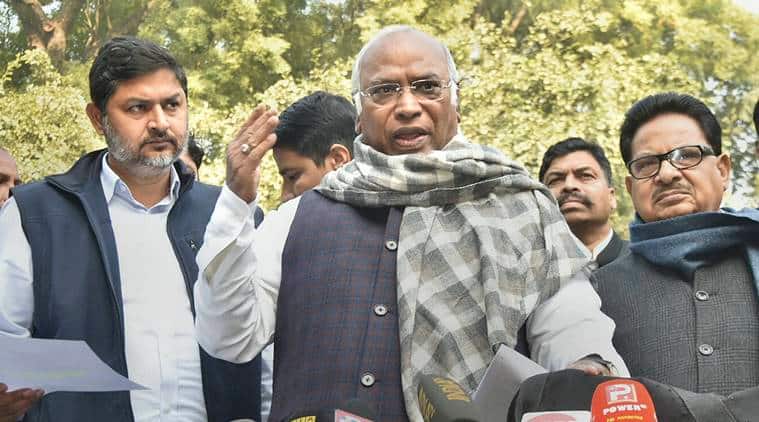 With the first leg of the Budget session of Parliament set to begin Monday amid a high-octane campaign for Assembly elections in five states, the Congress on Sunday gave a notice in Lok Sabha for moving a privilege motion against Minister for Electronics and Information Technology Ashwini Vaishnaw for “misleading” the House on the Pegasus spyware issue. A similar notice will be given in Rajya Sabha as well. Citing a report by The New York Times that India bought the Israeli spyware in 2017 as part of a $2-billion package for weapons, Congress leader in Lok Sabha Adhir Ranjan Chowdhury, who wrote to Speaker Om Birla seeking permission to move a privilege motion, said, “It appears that the Modi Government has misled the Parliament and the Supreme Court and lied to the people of India.” Read More

Both the Houses will function in two different shifts in a day during the coming Budget Session of Parliament, it was decided on Monday, as the country continues to remain in grip of the third wave of Covid-19 infections.

The protocols will be similar to the ones followed during the Monsoon Session of Parliament last year. Held in September 2020, the monsoon session was the first time parliamentary proceedings were held under strict Covid-19 protocol. The Rajya Sabha met in the first half of the day and the Lok Sabha during the second half. Members were seated in both the chambers to ensure social distancing. Similarly, this time around, the Upper House will convene in the morning and the Lok Sabha in the afternoon, a bulletin issued by the Lok Sabha Secretariat said on Monday.

With the Assembly elections round the corner, the Opposition is looking to corner the government during the Budget Session. (File Photo: PTI)

The first leg of the Budget session, although brief with just 10 sittings, will once again test the unity of the opposition parties given that some of them, including the Congress, are pitted against each other in the five election-bound states. The Trinamool Congress had stayed away from meetings of Opposition floor leaders convened by Leader of the Opposition in Rajya Sabha Mallikarjun Kharge during the Winter Session but had played a major role in the dharna staged by suspended MPs at the Mahatma Gandhi statue the entire session. But ties between the Congress and Trinamool Congress worsened.

Similarly, the NCP and Shiv Sena too were upset with the Congress for refusing to enter into a seat-sharing arrangement in Goa. In Uttar Pradesh, the Samajwadi Party, BSP and Congress are pitted against each other. In Punjab, the main battle appears to be between the ruling Congress and Aam Aadmi Party.