Match 50 per cent of EVM results with VVPAT: Opposition parties to Election Commission

The EC assured the parties that the issues raised by them would be “deliberated and examined”. 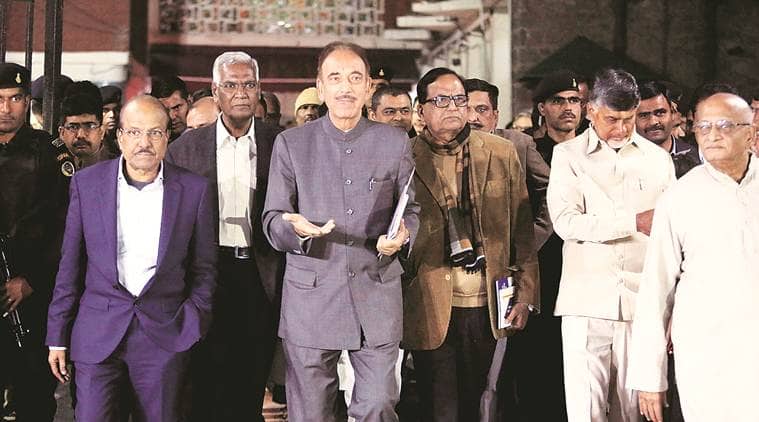 ARGUING THAT holding free and fair elections has come under serious cloud and electronic voting machines have emerged as a major cause of concern, leaders of 21 Opposition parties on Monday approached the Election Commission (EC) and asked it to ensure that 50 per cent of EVM results are matched and cross-checked with voter verifiable paper audit trails (VVPATs) before declaration of results in the upcoming Lok Sabha elections.

The EC assured the parties that the issues raised by them would be “deliberated and examined”. “While considering the averments made by the political parties, the Comission shall also keep in view the pronouncement made by the different Hon’ble Courts as well as the report expected shortly from the Indian Statistical Institute on the subject, besides the overall administrative and operational feasibility on the ground, before firming up any response,” the EC said in a statement.

The delegation, including Congress leaders Ghulam Nabi Azad and Mallikarjun Kharge, and Andhra Pradesh Chief Minister N Chandrababu Naidu, told the poll panel that an alarmingly high number of EVMs malfunctioned in the recent assembly elections and there was a mismatch between votes polled and votes counted in Madhya Pradesh and Telangana.

“In addition, instances of EVMs and strongrooms becoming vulnerable to attacks and manipulations were widely recorded and reported. Added to this were incidents where there were power outages, failure of CCTV cameras at the strongrooms, detection of signals of wireless/ mobile networks of a particular telecom operator in the vicinity of polling centres and strongrooms and so on,” the memorandum submitted by the parties said.

“It is imperative that the EC should ensure that sample, physical counter-check of the paper trail and matching it with the electronic vote should happen mandatorily in all, if not in at least 50 per cent of all EVMs,” it said.