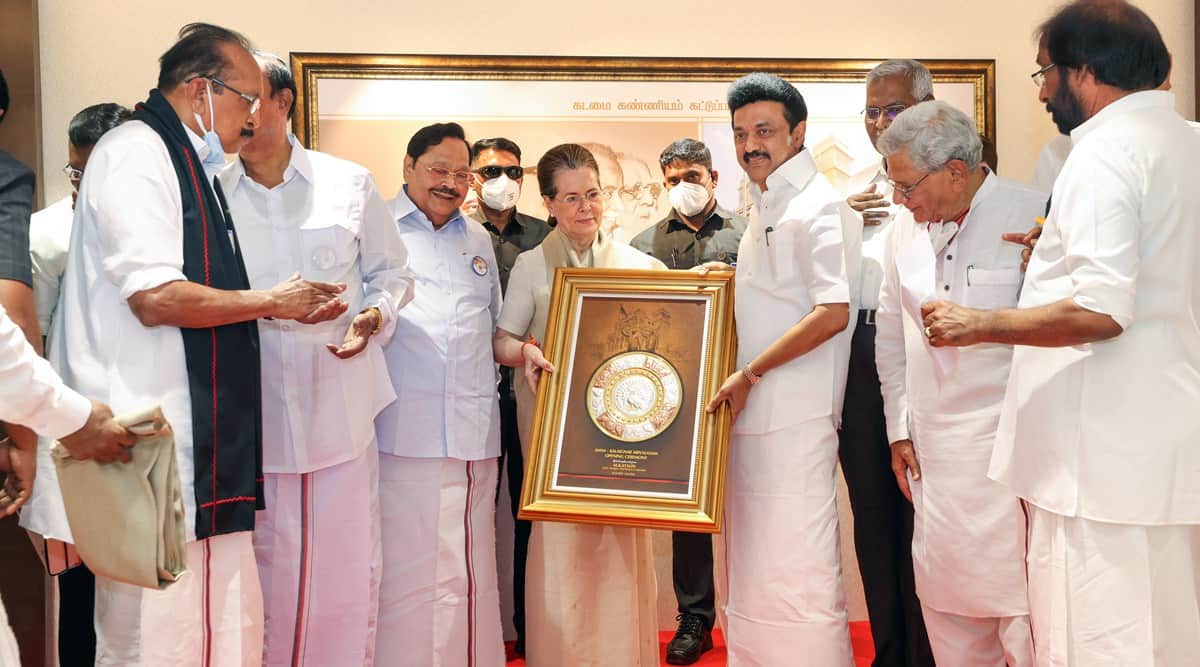 THE INAUGURATION of the DMK’s office in Delhi on Saturday brought together several non-BJP leaders at a time when there is churning in the Opposition, with non-Congress parties exhorting everyone to unitedly fight the ruling BJP and the Congress remaining largely indifferent.

Sonia also inaugurated a library at the office. The DMK and Congress, especially the Karunanidhi family and the Gandhis, share a special bond but the BJP’s increasing electoral dominance has prompted even Stalin to suggest that Congress should develop a “principled friendship” with parties at the all-India level, like the one it has with the DMK in Tamil Nadu.

Stalin has also asked all parties to come together to “save India”. Such exhortations have come from many regional parties after the BJP’s victory in the recent round of Assembly elections. However, many of the Opposition parties are now not asking the Congress to take the lead.

Sonia’s presence at the DMK event was significant as the Dravidian party is now perhaps the Congress’s only steadfast ally. In fact, wary that some parties may stay away, the Congress has not even called a meeting of Opposition floor leaders for floor coordination in Parliament during the second leg of the Budget session, which is ending next week.

Unlike in the past, Stalin did not call on Sonia during his visit to the capital this time. Instead, he spent time with Delhi Chief Minister and AAP leader Arvind Kejriwal on Friday, visiting a Delhi government school and mohalla clinic.

Sources in Opposition parties said most of the leaders are confounded by the Congress’s reluctance to put its house in order and make a meaningful move to bring the parties together. As a result, many of the regional leaders are now asserting themselves.

West Bengal Chief Minister Mamata Banerjee has written to all her non-BJP counterparts and other Opposition leaders, urging them to come together to fight the BJP.

Accusing the BJP government of using investigative agencies to “target, harass and corner political opponents” for “vendetta”, she has “urged everyone to come together for a meeting to deliberate on the way forward at a place as per everyone’s convenience and suitability.” “Let us commit to the cause of a unified and principled Opposition that will make way for the government that our country deserves,” she said.

Two days later, Yechury called Stalin the most acceptable leader among the non-BJP chief ministers, and urged him to convene a meeting of chief ministers to discuss federalism, social justice and steps to protect the people of India.

While Yechury would not welcome a meeting called by Banerjee, the CPM’s arch rival in West Bengal, it was interesting that he did not appeal to the Congress to take the lead.

Earlier this week, the Shiv Sena also called for a rejig of the UPA and suggested that the alliance should have a new leader. An editorial in party mouthpiece Saamana suggested that leaders like NCP chief Sharad Pawar, Shiv Sena chief and Maharashtra Chief Minister Uddhav Thackeray, Stalin, Banerjee, Kejriwal, TRS leader and Telangana Chief Minister K Chandrashekar Rao were all capable of bringing the Opposition together.

The NCP’s youth wing, in the presence of Pawar, passed a resolution recommending Pawar’s name for the post of UPA chairperson. Senior Congress leader Ghulam Nabi Azad, a member of the G-23 faction in the Congress, also met Pawar earlier.

Team of 5, and some more, who built New Delhi