In the absence of equipment to handle the situation, more than 300 people, including Coast Guard personnel and local fishermen, were engaged in removing the oil slick with buckets from the shorelines on Tuesday. 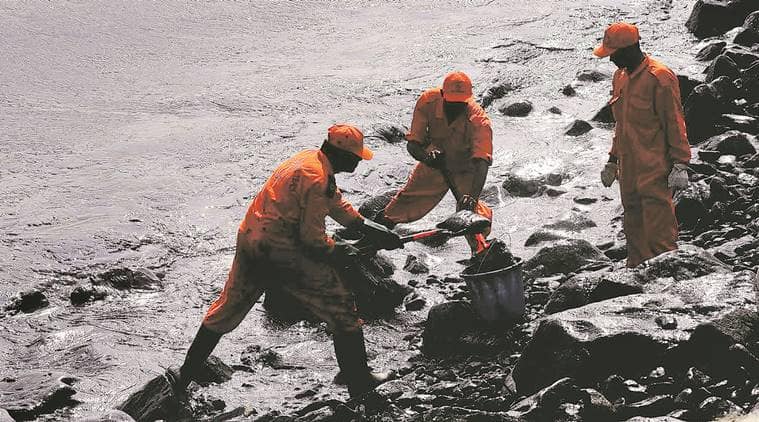 WHAT STARTED off as a report of “minor collision” between two ships at Kamarajar port in Ennore near Chennai early Saturday and a denial by port authorities about any oil spill, turned into a mini-disaster along Ennore-Chennai coastline on Monday and Tuesday. With more areas reporting oil slick on Tuesday, fishermen and environment activists called for action against port officials for allegedly attempting to underplay the collision, and its after-effect.

In the absence of equipment to handle the situation, more than 300 people, including Coast Guard personnel and local fishermen, were engaged in removing the oil slick with buckets from the shorelines on Tuesday. The port is less than 30 km from Chennai.

A few hours after the accident, a senior pilot at Ennore port had told The Indian Express that there were was no oil spill and that the situation was under control. As a thin layer of oil started spreading across the shorelines in the next two days, contradicting theories began emerging on what had led to the oil spill.

A senior port official claimed that the leakage occurred much later, ostensibly due to the long delay in controlling the situation. “We estimate that a crack on the fuel part was developed eventually and led to the leakage. We haven’t estimated the amount of oil spilled,” the official said on condition of anonymity.

Responding to a submission by M K Stalin, Leader of Opposition in the Assembly, Fisheries Minister D Jayakumar said, “One tonne oil has leaked,” resulting in floating oil slicks.

Another port official said, “There may be a probe on reports that there was no pilot on board one of the vessels,” he said.

A port-appointed pilot handles inbound and outbound vessels to avoid accidents by vessel captains unfamiliar to channels inside the port.