Naveen Patnaik is set to form government in the state after BJD won 111 of the 146 assembly constituencies.

Odisha Lok Sabha Election Results 2019: Prime Minister Narendra Modi Thursday congratulated Odisha Chief Minister Naveen Patnaik for his Biju Janata Dal’s performance in the state Assembly elections. The BJD Thursday looked set to form its government for a fifth straight term negating a Modi wave that is sweeping the country, with its candidates leading in 112 of the state’s 146 seats.

Meanwhile, the BJD firmly secured 12 seats while BJP has got 9 out of 21 Lok Sabha seats. This is good news for the BJP as it has secured four more seats than 2014 elections. In 2014, the BJD had won 20 seats and BJP took one. In the Lok Sabha elections, the Congress is not even in the fray as per the latest trends, while the saffron party sees scope for adding to their strength in Parliament from the 21 Lok Sabha seats in Odisha.

Although its Lok Sabha tally is set to dip, the Biju Janata Dal (BJD) on Thursday managed to withstand the wave in favour of the BJP across the country. The party also retained power in the Odisha Assembly polls, with its supremo and Chief Minister Naveen Patnaik set for a historic fifth term.

In Odisha, one of its focus states where it contested on its own, the BJP’s vote share has risen from 21.5% to 38% this time. It has managed to recapture the ground lost to the BJD in Western Odisha. However, the BJP was unable to translate this advantage to the Assembly seats, where the Naveen Patnaik-led BJD won 113 of the 147 seats. The BJP managed to win only 22. While the BJD registered a 12% lead against its nearest rival, the BJP has reaffirmed its position as the growing alternative party in the coastal state. Read more 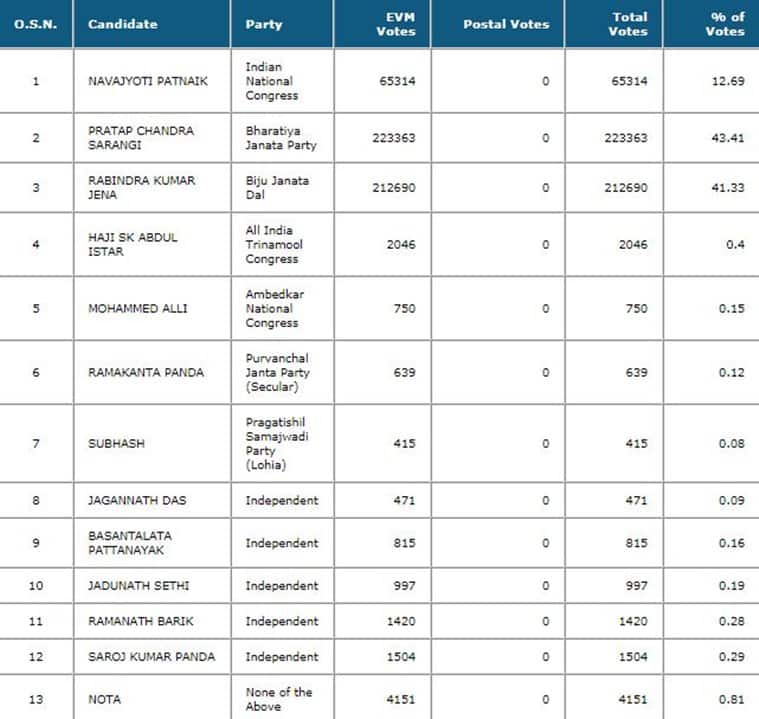 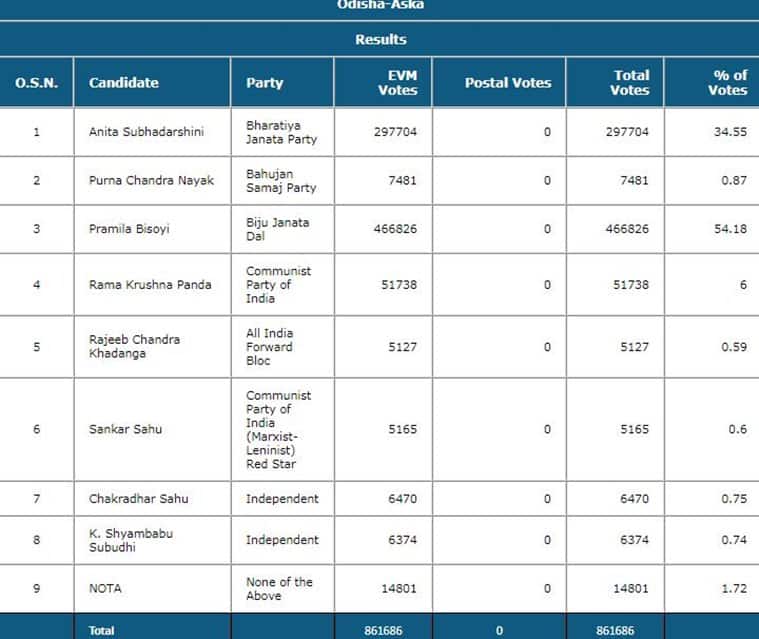 Patnaik reciprocates to PM Modi, congratulates him for BJP victory in Parliamentary poll 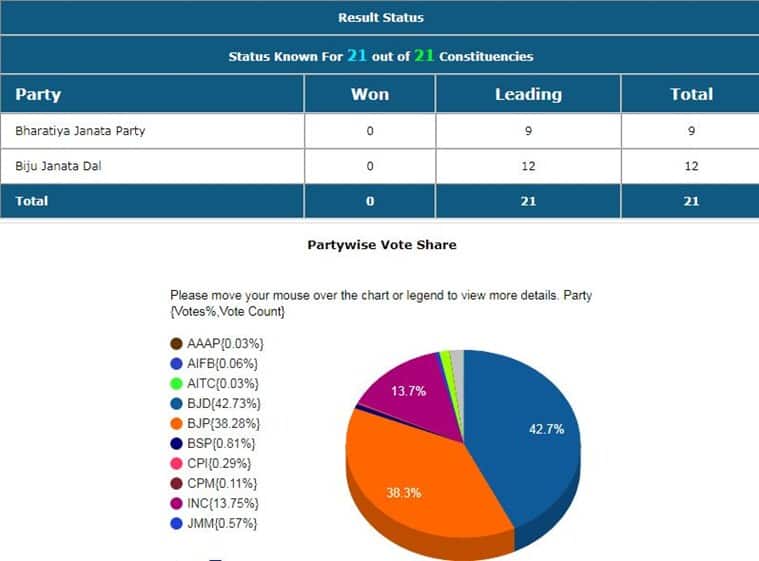 BJD candidate Anubhav Mohanty is leading in Kendrapara with over 72000 votes.

BJP seems to be increasing its gains, securing 9 seats while the BJD is holding onto 12 out of 21 Lok Sabha constituencies.

Congratulations to Naveen Babu for yet another victory in Odisha. Wishing
him the very best for the next term.

Pramila Bisoyi, BJD candidate, has perhaps clinched the seat emphatically with most number of votes compared to any other candidate from all other constituencies in the state.

BJP secured 7 seats this time, up from 1 in 2014. What was their strategy in the state?

The saffron party built its base on women’s security and corruption. Apparently, it's state created a strong network of women leaders who were campaigning on women’s security. Their party leaders claim that the Ujjwala scheme found resonance among the BJD's core women voters. On the issue of corruption,  the saffron party has vehemently slammed the Naveen Patnaik-led BJD around the Hockey World Cup, chit funds etc.

In Puri, BJP's Sambit Patra leading with margin of 2451 votes against BJD's Mishra

BJP's Sambit Patra is now leading from the key constituency of Puri by over 2451 votes against BJD's Pinaki Mishra.

In Odisha, and unlike Bengal, the BJP did not have to face such hostility from the ruling BJD. The BJD’s stance that it would support any party that takes care of Odisha’s interests at the Centre weakened its fight against the BJP in the state. A large section of voters seemed to be in a mood to back the BJP at the Centre while supporting the BJD for the government in the state.

In Odisha, the Biju Janta Dal's Kalikesh Narayan Singh Deo of erstwhile princely state of Patna is contesting against his sister-in-law, Sangeeta Kumari Singh Deo, from the BJP. The BJD candidate trailing by over 7,000 votes. The ruling Biju Janata Dal (BJD) is surging ahead with its candidates leading in 89 assembly constituencies, while BJP nominees are leading in 28 segments as per the latest trends available, officials said Thursday. Odisha has 147 members assembly. Polling in Patkura assembly segment in Kendrapara district was postponed in view of the death of a candidate and again due to cyclone Fani.

The BJP, BJD and Congress are the primary contenders from this seat in the 2019 general election. While five candidates are in the fray, the main contest is between BJP's Kharabela Swain, BJD's Achyuta Samanta and Congress' Monoj Acharya.

Odisha held Assembly elections along with the Lok Sabha polls on May 23, Thursday. Naveen Patnaik is all set to form the government, while the BJP will be happy to have gained 8 seats in the Lok Sabha elections, up by 7 seats since 2014 elections.