Not religion, lynching is about Parivar vs all: Ghulam Nabi Azad

Leader of the Opposition in Rajya Sabha Ghulam Nabi Azad said the lynchings are “not religious”, “Hindu-Muslim” or a “fight between upper castes and Dalits”, but the (Sangh) “Parivar’s battle against everybody”. 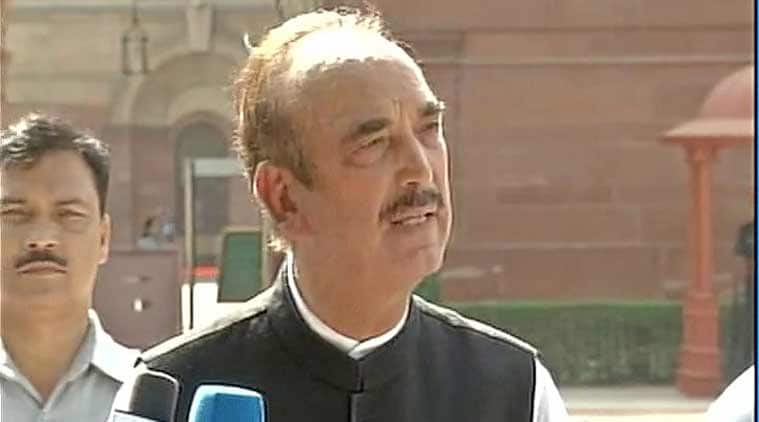 The discussion in Rajya Sabha on lynchings and atrocities on minorities and Dalits saw the Congress delinking these incidents from religion and caste on Wednesday. Leader of the Opposition in Rajya Sabha Ghulam Nabi Azad said the lynchings are “not religious”, “Hindu-Muslim” or a “fight between upper castes and Dalits”, but the (Sangh) “Parivar’s battle against everybody”. Launching a scathing attack on the ruling BJP and the government, Azad alleged that there was an “understanding” to let the lynchings continue. He told the government not to break India for votes, and asked it to shun “politics for votes”. He said only the ruling BJP was “benefiting” from the increasing incidents of lynching.

Recalling the recent incidents of lynching, he said: “No state is left… From Kashmir to Kanyakumari, no place is left where no incident has taken place. I am not saying lynchings did not take place in the past. I am not saying Dalits were not treated badly in the past… But when lynchings happened (in the past)… it was the handiwork of one individual, whatever be his religion. But I am sorry to say, you may not like it… but in all the cases of lynching now, someone or the other belonging to the ruling party and the Sangh Parivar is involved.”

He said had there been no understanding, the people who were involved would have been in jail by now. “Why is nobody being nabbed. All this is happening in broad daylight, happening before cameras, videos are being made… The local police, local media people know… Not one Opposition party is benefiting from this lynching. Only one political party, the ruling party, is benefiting from this,” he added.

“This is just for political harvesting, I am sorry to say. This country belongs to all. You (the government) have more responsibility than all of us. You have to run the government. Implementing law and order is your job. We will cooperate with you in protecting the unity and integrity of the country… We are ready to shed our blood. But you will have to take the lead. We can cooperate with you in creating a conducive atmosphere. But you yourself are spoiling the atmosphere,” he said. Azad said it is the government job’s to protect everyone — the poor, Dalits, minorities, farmers and the common man. “But here, the fence is eating the crop… the crop cannot be saved if the fence decides to eat it.”

Azad said nobody in the country has the “licence to kill”. “This is not a fight between Hindus and Muslims or upper castes and Dalits. This is a fight for the country, for humanity,” he added. “This is the battle of every one of us. This is battle for humanity… You will have to fight on the Pakistan front, Chinese front, there will be external threats… If our house is weak, then how can we fight. Our house has always been strong. Please don’t break our house for votes… protect our country and its unity and integrity… shun the politics for votes,” he said. Referring to the spate of lynchings in Jharkhand, he said the state has become the “akhara of lynchings” and “akhara of loot and arson”. Referring to attacks by “gau rakshaks” on cattle traders, he said, “You will not allow them to engage in trade… jaan se bi maroge, aur vyapar se bhi maroge.” Talking about hate messages circulated on WhatsApp, Azad said, “Most of the these emanate from the Parivar…not from us.”