North India pollution: Delhi's air quality is expected to remain in the 'severe' category as the already toxic situation caused by smoke from fireworks is likely to aggravate further due to intensified stubble burning in neighbouring states. 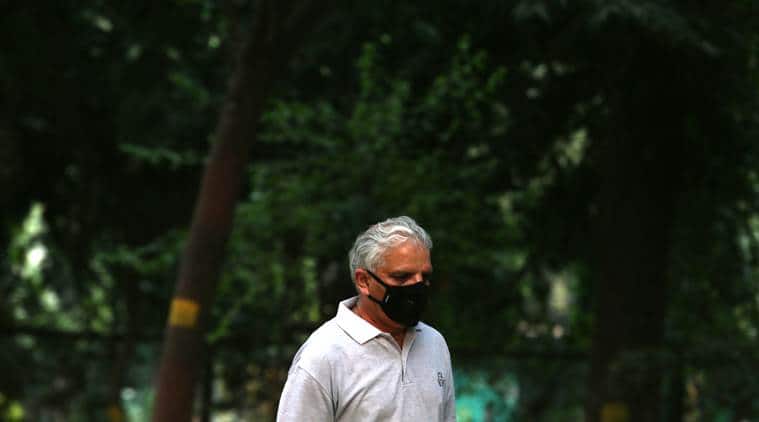 A man with his face covered walks in front of the Lodhi Garden in New Delhi. (Express Photo)

Delhi’s air quality Saturday morning improved to ‘very poor’ category after local pollutants “reduced significantly” and the contribution from stubble burning remained “marginal”. According to the data by the Central Pollution Control Board, The overall air quality index (AQI) was recorded at 394.  Today,  the PM2.5  level was recorded at 226, while the PM10  was recorded at 331 in Delhi. According to The Indian Institute of Tropical Meteorology (IITM), stubble burning was the “largest-ever recorded” for this year with 2,100 fire counts, which might lead to a further deterioration of the already “severe” air quality of the national capital.

To help improve the condition, the entry of heavy and medium goods vehicles into the national capital has been banned for three days beginning 11pm on Thursday night as Delhi’s air quality worsened to the “severe-plus emergency” category following rampant bursting of crackers on Diwali. Over 400 vehicles were returned from Delhi’s borders after the ban.

Meanwhile, Delhi Environment Minister Imran Hussain met with ministry officials on Friday and held discussions on the deteriorating air quality in the national capital which slipped to the “severe plus emergency” category after Diwali. Smoke rises as a farmer burns paddy stubbles at a village on the outskirts of Amritsar. (PTI Photo)

The air in the surrounding stubble-burning areas is already heavy due to increased moisture and pollutants. This heavy air will travel towards Delhi, where a similar situations exists, in the next 24 hours. This combined effect might add to the pollution woes, says the weather forecast system

Smoke mixed with mist and fog persisted in the morning

Delhiites woke up to a cold morning Saturday with the minimum temperature settling at 12 degrees Celsius, two notches below the season's average. Smoke mixed with mist and fog persisted in the morning, a MeT department official said, adding that the humidity level recorded at 8.30 am was 91 per cent. The weatherman has predicted clear skies throughout the day. The long-term impacts of air pollution paint a scary picture where health is concerned. One way to mitigate some of these risks is relying on air purifiers in your rooms, especially in bedrooms, to at least reduce some impact. Here is a list of air purifiers that you can currently purchase in India. This list is based on the options we have reviewed.  Xiaomi’s Mi Air Purifier 2S was recently launched in the country as a successor to the Mi Air Purifier 2 and can be seen as the most affordable option on the list. The device continues with the standard high-efficiency particulate air or HEPA filter. Read more

Unfortunately, however, desperation remains the name of the game for the city’s pollution control authorities. On Wednesday, more than 300 people were arrested for defying the Supreme Court’s restrictions on bursting crackers. The court’s stipulation that people can burst “green crackers” between 8 pm and 10 pm on the day of the festival was, no doubt, a less stringent version of last year’s all-out ban on fireworks. Even then, it was problematic.  Read more

Dipping temperatures increase the possibility of pollutants being trapped

Dipping temperatures increase the possibility of pollutants being trapped. This, coupled with low surface wind speeds, is likely to bring down air quality more as compared to Friday. SAFAR scientists also said that while satellite images show that heavy fire counts were recorded between Thursday and Friday evening, the contribution of pollutants was marginal. Read more

Delhi's RK Puram is at 278 under 'Very Unhealthy' category, in the Air Quality Index pic.twitter.com/YD8ONdOf22

The National Green Tribunal has directed the North Delhi Municipal Corporation and Delhi Pollution Control Committee to inquire and take action against an alleged illegal building running industrial activity in its premises in Wazirpur. A bench headed by NGT Chairperson Justice Adarsh Kumar Goel directed the municipal corporation and the pollution monitoring body to look into the matter and take appropriate action in accordance with the law.  The green panel said the report of the steps taken be furnished to it on or before December 15, 2018, by e-mail and posted the matter for consideration in the last week of January 2019.

Delhi: According to the Air Quality Index (AQI) data, major pollutant PM 2.5 is at 407 (severe) and PM 10 at 277 (Moderate), in Lodhi Road area; #Visuals of smog from Delhi's Rajpath area pic.twitter.com/ogfUpxKVoj

Over 400 heavy and medium goods vehicles were returned from Delhi borders due to a ban on their entry as the city's air quality remained severe for the second consecutive day on Friday. Environment Pollution Control Authority (EPCA) Chairperson Bhure Lal has assured that the Supreme Court-appointed body would go after vehicles causing pollution in the city. He also said people should have abided by the direction of the Supreme Court on bursting of firecrackers in the stipulated time frame of 8 pm to 10 pm.

Delhi's pollution level remained 'severe' for the second day as a thick haze engulfed the national capital. However, the authorities said there was significant improvement in the air quality compared to that of Thursday, reported PTI.

According to Central Pollution Control Board (CPCB), the overall air quality index (AQI) was recorded at 426 which falls in the 'severe' category. However, the Centre-run System of Air Quality and Weather Forecasting And Research (SAFAR) said air quality of the city has "improved significantly" According to SAFAR, the air quality is expected improve further and will become 'very poor' by afternoon and will improve further by Saturday. SAFAR said the contribution of PM2.5 in PM10 which was 75 per cent on Thursday (against normal 55 per cent) has also been reducing.

Over 300 arrests in Delhi alone

On Diwali night, police registered 562 cases for "disobedience of order" (Section 188 of IPC) and arrested 310 people in Delhi alone. Police across major cities struggled to enforce the Supreme Court's guidelines on bursting firecrackers as illegal crackers went off pushing the air quality to 'very poor' and 'severe'. READ MORE

According to SAFAR, the overall air quality index (AQI) of Delhi at 8.15am was 428, which falls under 'severe'  category.  As a measure to control pollution North delhi Municipal Corporation was seen to be sprinkling water on trees around Delhi University's North campus to settle the dust, reported ANI. 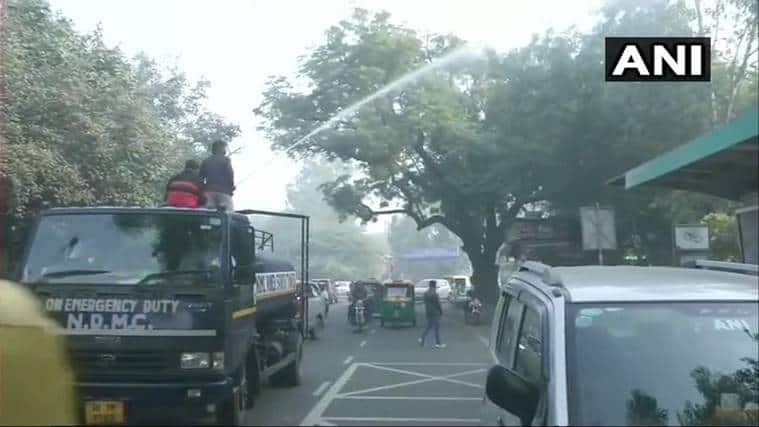 Delhi’s air quality Friday morning has been recorded in the  ‘severe’ category with 463 AQI in Anand Vihar, 469 AQI in Nehru Nagar and 449 AQI in Patparganj. It is expected to remain in the ‘severe’ category on Friday and Saturday as the smoke emitted by firecrackers has slowed down the process of pollutant dispersion, a report by government-run agency SAFAR said Thursday.

Host of unfortunate incidents reported in Delhi amid Diwali celebrations

While Diwali celebrations were on in various parts of the city, a host of unfortunate incidents took place, including the death of two children due to fire in a slum.

In the fatal incident in a slum near Filmistan Cinema in the Sadar Bazar area, two children — Ganesh (10) and Swati (4) — were killed. Their mother Suman (28) and brother Dhruv (5) suffered 55 per cent and 70 per cent burn injuries respectively, and were undergoing treatment.

Authorities responded to over 300 calls about fire incidents triggered by firecrackers and an LPG cylinder blast among others on Diwali night in the national capital, officials said.

According to the Delhi Fire Services (DFS), a record number of 271 fire-related calls were received by its offices till midnight on Diwali and 74 more calls till 8 AM on Thursday.

The entry of heavy and medium goods vehicles into the national capital will be banned for three days beginning 11 pm on Thursday night as Delhi's air quality worsened to the "severe-plus emergency" category following cracker burning on Diwali.

The Transport department of the Delhi government has issued a notification regarding the ban. It has also appealed to private diesel vehicle owners to avoid using their vehicles during the period.

As per the notification, entry of heavy and medium goods vehicles into the national capital will be banned from 11 pm of November 8 till 11 pm of November 11, Special Commissioner of Transport department K K Dahiya said.

Over 7,900 kg of illegal firecrackers seized from various parts of Delhi

Over 7,900 kg of illegal firecrackers, including over 2,500 kg on Diwali, have been seized from various parts of the national capital since the Supreme Court ordered a ban on sale of old crackers, police said Thursday.

A total of 113 cases have been registered and 124 people arrested for violating the
apex court's October 23 order, they said.

According to police, over 2,500 kg of illegal firecrackers were seized from various parts of the city on Diwali and 87 people arrested in connection with 72 cases registered in this regard.

Delhi's pollution level post-Diwali nearly doubled in comparison to last year as people burst firecrackers before and after the Supreme Court stipulated time frame of 8 pm to 10 pm.

The overall air quality index (AQI) Thursday was recorded in the "severe plus emergency" category at 642, according to Centre-run System of Air Quality and Weather Forecasting and Research (SAFAR) data.

As violations of Supreme Court imposed restrictions on use and sale of firecrackers were reported across states during Diwali, questions cropped up Thursday over implementing the ban in a short period but legal experts said law enforcement agencies must be made accountable for the breaches that can hurt the ambitious efforts to combat pollution.

The experts also said the ban is not unimplementable.

The Centre-run Safdarjung hospital, which has largest burns unit in the country, received around 104 cases, including 22 admissions related to major burn injuries, from 9 AM on Wednesday to 9 AM on Thursday. READ MORE