Haley, a senior Indian-American member of the Trump administration, said in New York that the US would try and "find its place" in efforts to de-escalate Indo-Pak tensions and not wait till "something happens". 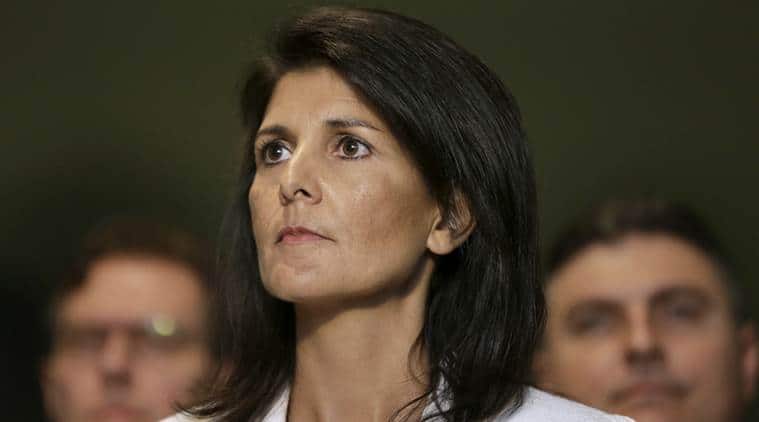 US ambassador to the United Nations Nikki Haley. (Source: AP)

Foreign Policy experts on Tuesday said it will be premature to draw a conclusion based on comments by US envoy to the UN Nikki Haley about possible intervention by the Trump administration to de-escalate tensions between India and Pakistan. But at the same time, they felt India must send a strong message to Washington that no third party mediation of the issue is acceptable to India.

“Firstly, the comments were in response to a question. We do not know whether it is a policy decision by the US or an off-the-cuff remark. It is too premature to come to a conclusion based on the remarks,” said Meera Shankar, who was India’s Ambassador to the US from from 2009 to 2011.

Haley, a senior Indian-American member of the Trump administration, said in New York that the US would try and “find its place” in efforts to de-escalate Indo-Pak tensions and not wait till “something happens”, indicating President Donald Trump could play a role in such endeavours.

Shankar said the US policy has been to ensure de-escalation of tensions between India and Pakistan but America never saw a role for it in resolving issues between the two countries. “Still, we should make our position very clear to the US that we are not open to any third party intervention (in resolving issues with Pakistan),” she said.

Parthasarathy, who was India’s High Commissioner to Pakistan, said there were instances of US intervention, including during Kargil war, in bringing down tension between the two south asian neighbours. “Haley’s statement was badly worded but it does not indicate that the US will mediate,” said Parthasarathy.

India’s former envoy to US Naresh Chandra called the comments a “clever move” by the US to send a signal to Pakistan that it was with Islamabad on the issue. He said there is an “aggressive lobby” in the US which wants intervention by Washington in resolving issues between India and Pakistan.

“It is an ill advised move. There is a clever design by a lobby which wants US intervention…We should tell the Trump administration very clearly that there is no question of any intervention by either the US or the UN (in resolving issues between India and Pakistan,” Chandra, who served as Indian Ambassador to the US between 1996 and 2001, said.

Shankar said Barack Obama, after taking over as the US President, had also made some remarks about American intervention in defusing tension between India and Pakistan but did not go ahead after India’s objection. “There is always a learning curve for a new administration,” she said.