No hike in MGNREGA wages in 10 states

In the worst wage revision in the history of the rural employment guarantee scheme, that started in 2006, MGNREGA workers in 10 states will get no hike in their wages for FY 2018-19, according to the revised wage rates issued by the Union government. 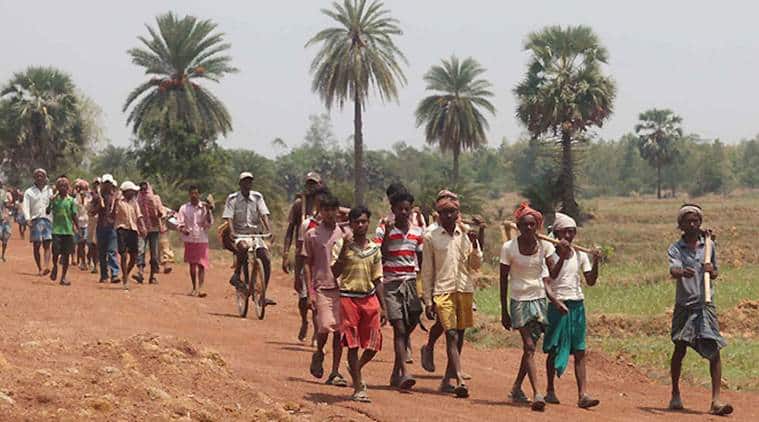 Beginning April 1, MGNREGA workers in 28 of the 36 states and Union territories will get wages lower than minimum wages. (File Photo)

In the worst wage revision in the history of the rural employment guarantee scheme, that started in 2006, MGNREGA workers in 10 states will get no hike in their wages for FY 2018-19, according to the revised wage rates issued by the Union government on Saturday. The wages will remain unchanged in states like Jharkhand (Rs 168), Bihar (Rs 168), Uttarakhand (Rs 175) and Arunachal Pradesh (Rs 177) where the wages are already the lowest, while another five states are set to get a negligible wage hike of Rs 2 per day. These include Gujarat (Rs 194), Maharashtra (Rs 203) and Madhya Pradesh (Rs 174).

The average wage hike for FY 2018-19 is 2.9 per cent, only slightly higher than last year’s 2.7 per cent. However, unlike this year, in 2017-18 every state had an upward wage revision, even if marginal. In 2016-17, the average wage hike was 5.7 per cent for the scheme under the Mahatma Gandhi National Rural Employment Guarantee Act.

The poor wage hike this year is owing to the Finance Ministry’s recent rejection of the Ministry of Rural Development’s (MoRD) Nagesh Singh report that recommended indexing annual MGNREGA wage revision to CPI (Rural) instead of CPI (Agricultural Labourers). Last year, the Finance Ministry had turned down the expert Mahendra Dev panel report which had asked for bringing MGNREGA wages on a par with every state’s minimum agricultural wages and then indexing it to CPI (R) for annual revision. The MORD’s internal Nagesh Singh panel was set up on the Finance Ministry’s insistence to study the “financial implications” of the Mahendra Dev report. The Nagesh Singh panel said there was no need to bring MGNREGA wages on a par with minimum wages of states but agreed with the second recommendation of the Mahendra Dev report that the annual wage revision should be at least linked to CPI (R).

The MoRD usually issues its annual revised MGNREGA wage rates to all states by February end-March first week, but this year it was issued on March 31. According to sources, the delay was due to lack of response from the Finance Ministry to the Nagesh Singh report over the last few months before finally sending its rejection last week.

“The Finance Ministry has maintained that there is no reason why we should use CPI (R) to revise wages instead of CPI (AL), which has been in use all along,” said a ministry official. Accordingly, as per the CPI (AL) indexation, Tamil Nadu (Rs 224) has got the highest MGNREGA wage hike of Rs 19 per day while workers in Jharkhand and Bihar, with its unchanged wages, will received the lowest wages. Finance Ministry officials were unavailable for comment.

The reasoning given by both Mahendra Dev and Nagesh Singh panels for the shift to CPI (R) is that it is a better indicator of wage increase as it gives lower weightage to food items. The basket of goods for calculating CPI (AL) is mainly food items (up to 72 per cent).

“Since the National Food Security Act was enforced, prices of some food items have declined, which is why a shift to CPI (R) was considered necessary. As per the Finance Ministry orders, when we based MGNREGA rates revision on CPI (AL), it was found that in 10 states the wages would decrease further from what they were last year. As we cannot lower MGNREGA wages, we decided to at least keep it constant,” said a ministry official.

Officials added that had the revision been done as per CPI (R), it would have required additional budgetary provision of only Rs 2,033 crore. In 2017-18, the MoRD has disbursed Rs 55,166 crore to states for the demand-driven scheme that provides an essential security net, especially in times of rural distress.