PM Narendra Modi Oath-taking Ceremony LIVE Updates: Narendra Modi took oath as a Prime Minister for a second time in the presence of a large gathering of national and international dignitaries.

PM Modi oath-taking Ceremony LIVE Updates:  Narendra Modi Thursday was sworn in as country’s Prime Minister for a second term. Modi was administered oath along with his new council of ministers at 7 PM by President Ram Nath Kovind. The swearing-in ceremony is a grand affair with more than 6,000 guests, including leaders from the BIMSTEC countries, opposition leaders Rahul Gandhi and Sonia Gandhi, chief ministers, corporate honchos and film stars in attendance.

BJP president Amit Shah has joined the list of Union ministers in the new government. Smriti Irani, who unseated Rahul Gandhi from the Congress’ bastion of Amethi in the Lok Sabha elections, was also sworn in as a Union minister.

PM Narendra Modi swearing-in LIVE updates: Narendra Modi and his council of ministers took oath in the forecourt of the Rashtrapati Bhavan in Delhi. Follow the latest news and updates in Bangla | Tamil | Malayalam

Thank you for reposing faith in me: Amit Shah after induction in Union cabinet

Thankful to Prime Minister Shri @narendramodi ji for reposing faith in me. Your leadership and continued support is a great source of inspiration. I assure you that I will put my best efforts to serve our people and country. pic.twitter.com/ZDLgv5w4Fw

BJP president Amit Shah, who was sworn in as a Union minister at the swearing-in ceremony of Narendra Modi and his council of ministers, called it a "historic moment for entire India".

"In the last five years, India has witnessed an era of unprecedented growth in every field. PM Narendra Modi govt has laid the foundation of a New India, which is not only asserting itself in the world order but also working tirelessly to lift living standards of its citizens," he tweeted.

Congratulations to Shri @narendramodi ji on being sworn in as the Prime Minister of India for a second consecutive term.

I am sure India will continue to scale new heights under your able leadership. pic.twitter.com/fb6qvIyJAQ

As PM Modi takes oath in Delhi, his mother cheers watching son on TV in Ahmedabad

As Prime Minister Narendra Modi took oath of office along with ministers in his cabinet at the Rashtrapati Bhavan Thursday, his mother Heeraben Modi was pictured happily clapping at her home in Ahmedabad watching her son on television. Full story here

Congratulations to PM @narendramodi and his new Cabinet Ministers. We wish them the best & look forward to working with them on the growth & development of India & all its citizens.

Senior BJP leader and eight-time MP Maneka Gandhi is likely to be the pro-tem speaker in the 17th Lok Sabha, PTI reported quoting sources. The main duty of the pro-tem Speaker is to administer the oath of office to new members of the Lok Sabha.

A temporary post, the Pro-tem Speaker presides over the first meeting of lower House of Parliament after the General election besides presiding over the sitting in which the Speaker and Deputy Speaker is elected if it is a newly constituted House.

Ministers in the new Union cabinet-

Narendra Modi Thursday took oath as the Prime Minister of India for a second consecutive term.  For more pictures of the swearing-in ceremony , click here 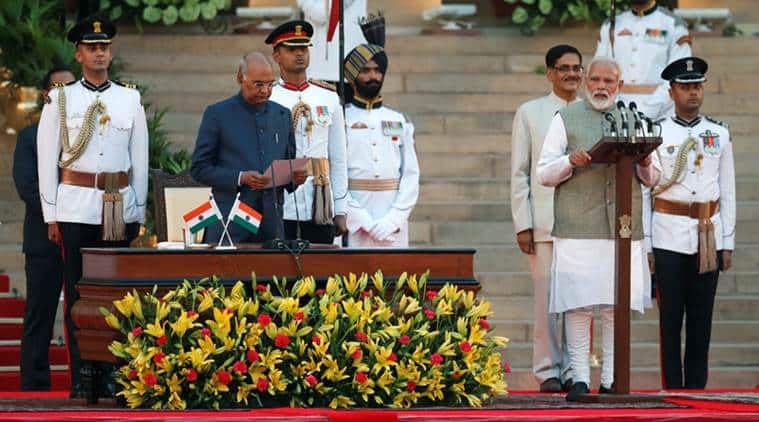 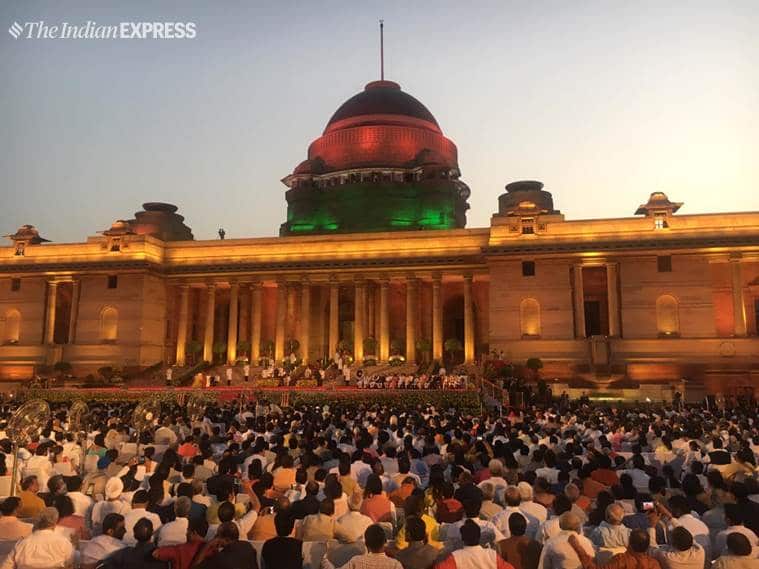 Narendra Modi cabinet: Profile of all the ministers

Narendra Modi cabinet: As the Modi-led government returns to power, we take a look at the profiles of Prime Minister Narendra Modi and his new council of ministers. Click here to know more

Piyush Goyal takes oath as Union minister. A Rajya Sabha MP from Maharashtra, Piyush Goyal was inducted as Minister of State into the Modi Cabinet in 2014 but was elevated as Cabinet Minister in 2017 when he was given the Railways charge.

Smriti Irani, who unseated Rahul Gandhi from the Congress' bastion of Amethi in the Lok Sabha elections, was also sworn in as a Union minister.

Former Foreign Secretary Subrahmanyam Jaishankar takes oath as Union Minister. A 1977 batch Indian Foreign Officer, Jaishankar has previously served as Indian ambassador to US (2014-15), China (2009-13) among other European nations, and had a major role in the negotiation of the ambitious India-US civil nuclear agreement. Read more here

With as many as 6,000 guests, including leaders of BIMSTEC countries, the ceremony will also be attended by Former Prime Minister Manmohan Singh, UPA Chairperson Sonia Gandhi and Congress president Rahul Gandhi.

What does your dream Cabinet look like? Play this game to pick your ministers!

According to news agency PTI, the ministers who will take oath along with Narendra Modi at Rashtrapati Bhavan this evening will meet the Prime Minister at his residence at 4.30 pm. The BJP has refrained from making any official comment about the likely members of the government, with its leaders asserting that it is the prime minister's prerogative.

Before the swearing-in ceremony, BJP MPs, led by Modi and Shah, paid homage to Mahatma Gandhi at Rajghat as well as at the Vajpayee memorial and the new war memorial. Elaborate security and traffic arrangements have been made by the Delhi Police for smooth conduct of the function.