PM in Kolkata HIGHLIGHTS: Prime Minister Modi, who is in a two-day visit to Kolkata is likely to share stage with Bengal chief minister Mamata Banerjee at sesquicentenary celebrations of the Kolkata Port Trust at Netaji Indoor Stadium on Sunday.

Prime Minister Narendra Modi, who is on a two-day visit to Kolkata, on Sunday named the Kolkata Port Trust as Syama Prasad Mookerjee Port. While speaking at an event to mark the 150 years of Kolkata Port Trust in Netaji Indoor Stadium, PM Modi rued it is unfortunate that after they resigned from the government, the visions of Dr Mookerjee and Babasaheb Ambedkar were not implemented the way they should have been.

Meanwhile, West Bengal Chief Minister Mamata Banerjee, who was also expected to attend the function, skipped it. Earlier in the day PM attended a prayer meet at Belur Math to mark the birth anniversary of Swami Vivekananda, the founder of Ramakrishna Mission. Reiterating that the Citizenship Amendment Act is not a law to revoke citizenship, but to grant it, PM Modi on Sunday said some people with vested interest are misguiding the country’s youth. “There are a lot of questions among the youth about the new citizenship law, and some are being misled by rumours around it… it is our duty to clear their doubts,” he said.

On the first day of his visit, PM Modi was met with protests against the new citizenship law. Chief Minister Mamata Banerjee too met the prime minister and asked him to withdraw the contentious law. “I told him that maybe this is not the appropriate time for me to say this, but we feel strongly about this issue. We are against CAA, NRC and NPR. But we have been agitating against CAA, NRC, and NPR. I told him we are against dividing people. We do not want people to be driven out of the country. We do not want people to face any atrocities. I told him that the Centre should rethink on CAA. We want it to be withdrawn,” the Chief Minister told reporters outside Raj Bhavan after her 35-minute “courtesy meeting” with Modi.

PM Modi in Kolkata: Here are the HIGHLIGHTS of the prime minister's engagements for the day including Swami Vivekananda birth anniversary celebrations and the 150 years of the Kolkata Port Trust. 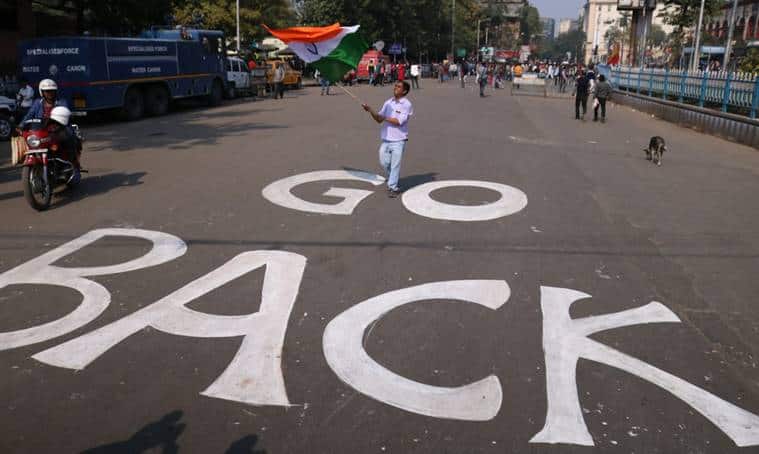 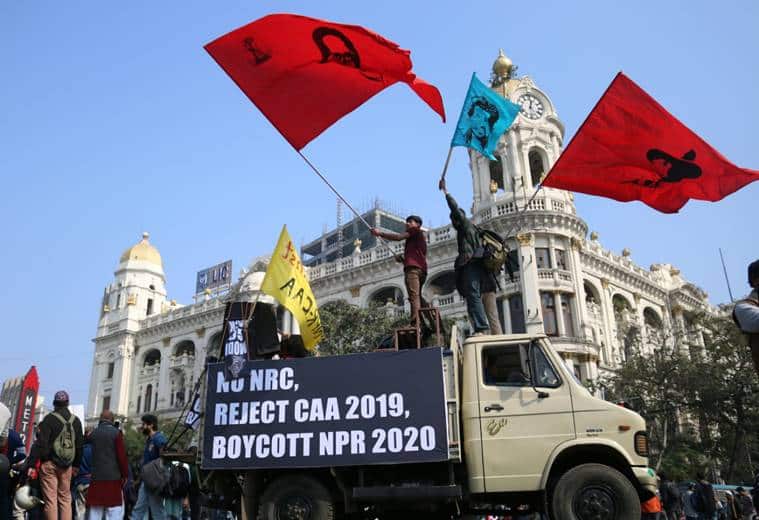 Cutting across political lines what started as a synchronised protest pitch against the Bengal visit of Prime Minister Narendra Modi, turned into a Left versus Trinamool Congress confrontation, after Chief Minister Mamata Banerjee met him at the Raj Bhavan in Kolkata on Saturday.

Throughout the day, the state capital and its neighbouring areas witnessed several protests against the PM for the BJP-led Centre’s Citizenship Amendment Act (CAA) and the proposed nationwide Nation Register of Citizens (NRC). Supporters affiliated to the Left, Congress, different students’ organisations, including Jadavpur University and Presidency University, started a march towards the Raj Bhavan, but were blocked by the police. The TMC, too, protested in different parts of the state capital. Read more... 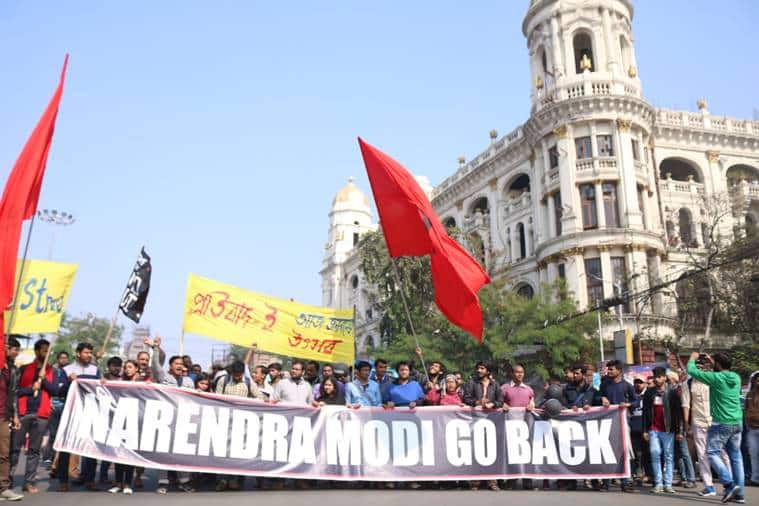 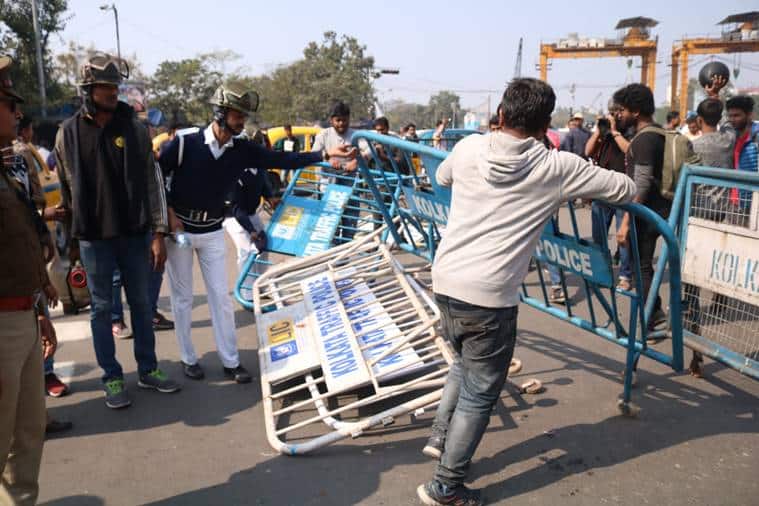 While talking at the Kolkata Port Trust event, PM Modi took a dig at West Bengal Chief Minister Mamata Banerjee, saying that the state government is the hindrance for the people who are losing out on the benefits of the central health schemes. "As soon as the West Bengal Government allows the Ayushman Bharat Yojana and PM Kisan Samman Nidhi, people here will also get the benefits of these schemes," PM Modi said. 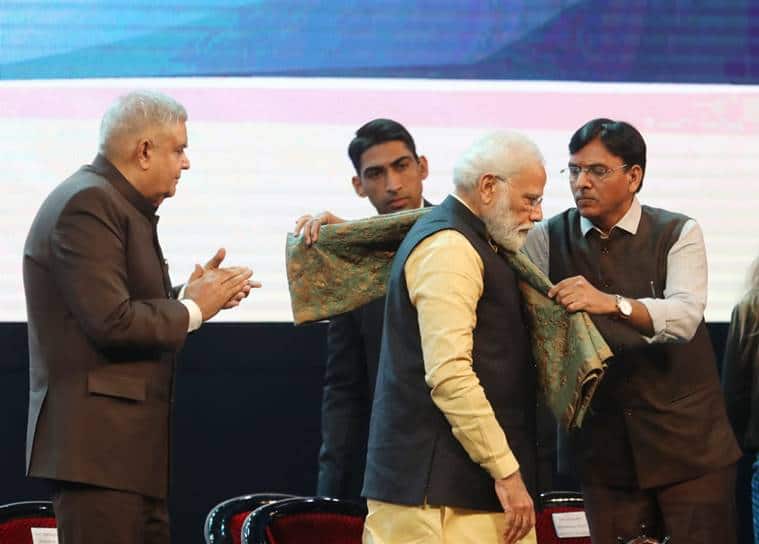 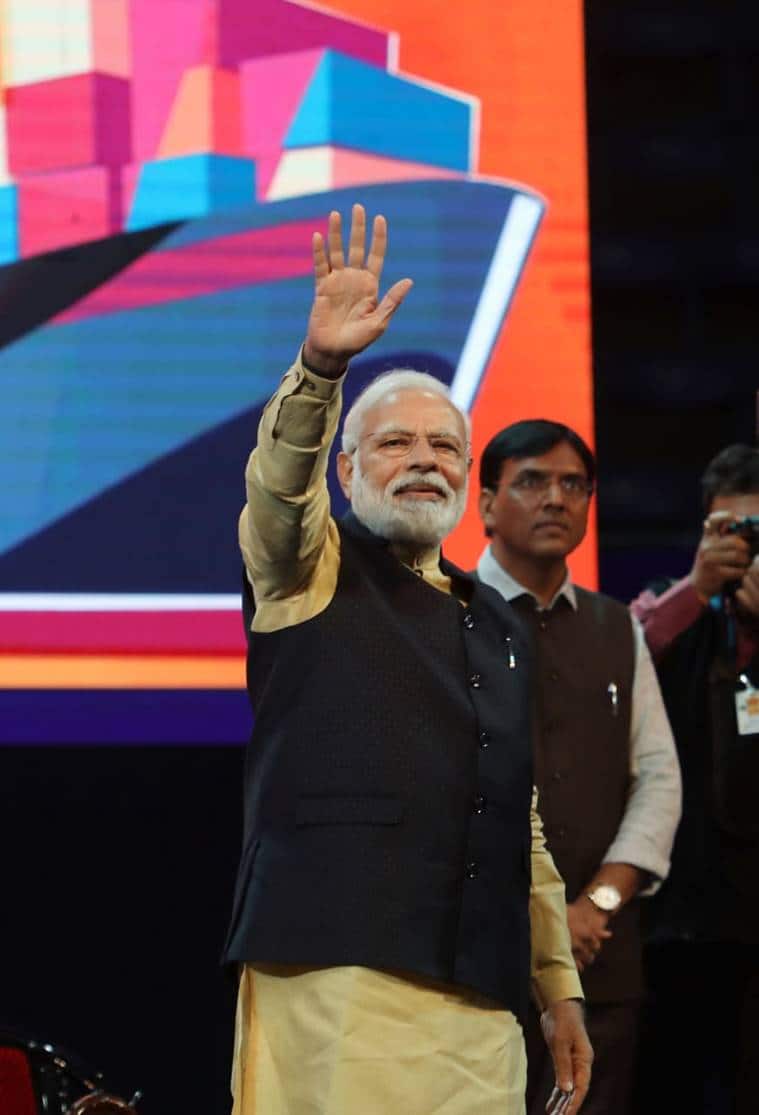 Meanwhile, Trinamool Congress MP Abhishek Banerjee quoted on Swami Vivekananda, and said on his 157th birthday, his speech in Chicago has become even more relevant.

(2/2)'I am proud to belong to a nation which has sheltered the persecuted & the refugees of all religions & all nations of the earth.”
Swamiji’s thoughts are omnipresent & let his preachings be the guiding light for decisions we take today that will decide our future tommorow.

"Government is endorsing cruise-based tourism now. This will benefit West Bengal too.  We are putting all our efforts for the uplift of the poor, tribals, dalits of this state," PM Modi.

"This (Kolkata) port represents industrial, spiritual and self-sufficiency aspirations of India. Today, when the port is celebrating its 150th anniversary, it is our responsibility to make it a powerful symbol of New India," says PM Modi

Country has been benefitted from inland waterways: Modi

"The country has been benefitted from inland waterways. Haldia and Benaras has been connected through waterways," Modi says.

It is unfortunate that visions of Babasaheb Ambedkar and Shyama Prasad Mukherjee were not taken seriously after they resigned from the government,  says PM Modi

Reiterating that the Citizenship Amendment Act is not a law to revoke citizenship, but to grant it, Prime Minister Narendra Modi on Sunday said some people with vested interest are misguiding the country’s youth.

Speaking at a prayer meet to mark the birth anniversary of Swami Vivekananda at Belur Math, Modi said, “There are a lot of questions among the youth about the new citizenship law, and some are being misled by rumours around it… it is our duty to clear their doubts. Read more...

CAA has made people aware of kind of persecution Hindus in Pakistan face: PM Modi

"It's because of this (citizenship) law that people here have become aware of the kind of persecution the Hindus in Pakistan face. Pakistan is now answerable to us," PM Modi says

Political parties are not ready to understand the citizenship act: PM Modi

"Political parties are not ready to understand the citizenship act... Despite such clarity, some people are spreading rumours about CAA. But I am happy that the youths of today helping others to get rid of the misconceptions," PM Modi said.

'Gandhiji, other big leaders believed that India should give citizenship to persecuted religious minorities'

"After independence, Mahatma Gandhiji and other big leaders of the time, all believed that India should give citizenship to persecuted religious minorities of Pakistan. Isn't this our responsibility to save those persecuted people or not? Will you stand by my side in this decision?" asks Modi.

Youths have been misguided by rumours on CAA: PM Modi

"A lot of youths have been misguided by rumours (on CAA). Citizenship Amendment Act is a law to strip anybody of their citizenship. Instead it is a law to grant citizenship to persecuted people," PM Modi says.

Dream of New India can be fulfilled with help of youth: PM Modi

"The dream of New India can be fulfilled with the help of youth. Don't run away from problems, instead solve them, challenge your challenges," says PM Modi.

Modi also attended a “Ghare Baire” (the world, home, and beyond) event at the Old Currency Building, and inaugurated a light-and-sound show at Millennium Park before travelling to the headquarters of the Ramakrishna Mission at Belur Math, where he was to stay the night.

The PM's visit comes at a time when West Bengal has been witnessing widespread protests against the contentious Citizenship Amendment Act. Hundreds of protesters holding black flags demonstrated outside Kolkata airport gate number one crossing. The police had put up a barricade to prevent them from crossing over to the airport side. Rallies were taken out in several parts of North and South Kolkata, Howrah, and North 24-Parganas district to protest the PM’s visit to the state. Student organisations of the Congress and Left, Muslim organisations, and university students including those from Jadavpur and Presidency, hit the streets in protest.