PM Narendra Modi in Saudi Arabia Highlights: Prime Minister Narendra Modi on Tuesday held extensive talks with Saudi Arabia’s top leadership during which a Strategic Partnership Council was established to coordinate on important issues. Both the countries inked over a dozen agreements in several key sectors including oil and gas, defence and civil aviation to bolster their ties. Modi, who is on a two-day visit to the Gulf Kingdom to attend the Future Investment Initiative here, held talks with Saudi King Salman bin Abdulaziz and powerful Crown Prince Mohammed bin Salman, news agency PTI reported.

PM Modi has also invited Saudi companies to invest in India’s energy space saying that the government has set a target of $100 billion investment in the sector. Delivering the key note address at the Future Investment Initiative (FII) 2019 in Riyadh Modi said India also aims doubling of economy to $5 trillion in next five years.

Meanwhile, Saudi Arabia announced 23 investment agreements worth more than $15 billion in value. The deals were signed on the sidelines of the Future Investment Initiative, dubbed “Davos in the desert”.

Modi landed in Riyadh late Monday night on a two-day visit. This is Modi’s second visit to Riyadh, almost three-and-a-half years after his visit in April 2016.

In a significant boost to the strategic ties between India and Saudi Arabia, Prime Minister Narendra Modi and Crown Prince Mohammed bin Salman on Tuesday signed the Strategic Partnership Council Agreement to coordinate on important issues. Modi, who is on a two-day visit to the Gulf Kingdom to attend the Future Investment Initiative here, held wide ranging talks with Saudi King Salman bin Abdulaziz and powerful Crown Prince Mohammed. After the delegation-level talks, the two sides signed the agreement to establish the India-Saudi Arabia Strategic Partnership Council to coordinate decisions regarding strategically important issues.

The council will be headed by Prime Minister Modi and Crown Prince Mohammed and meet every two years. Prime Minister Modi said with the signing of the agreement on the Strategic Partnership Council, the bilateral ties in various fields will be strengthened further. "India's relations with Saudi Arabia are one of the most important bilateral relationships in our extended neighbourhood," he told Arab News in an interview. PTI

Thanking Saudi Aramco for deciding to invest in West Coast Refinery Project - which will be the largest refinery of Asia, Modi said that by 2024, " we aim to invest US$ 100 Billion in refining, pipelines, gas terminals. "

400 million people to be skilled in coming years: PM Modi

"Under Skill India initiative, in the coming 3-4 years, 400 million people will be trained under different skills. This will provide assured skilled manpower to companies investing in India," adds Modi.

Emphasisng on fostering a new innotive culture in the next generation, Modi said technology has made a transformative impact and technologies like artificial intelligence, Genetics and nano-technology has now become part of our daily lives. He also said that
India aims to invest $1.5 trillion in infrastructure and that the  countries growth will be always in double digits.

At the Future investment initiative (FII), Modi invited global investors to benefit from our start-up ecosystem. He said, "today India has become world's 3rd largest start-up ecosystem. Even in tier-2&3 cities of India startups have come up. Our start-ups have started investing at global scale."

Our ancient relations has built a strong foundation for our strategic partnership: Modi in Saudi

The aim of this forum is not only to discuss the economic system here but also to understand the rising trends of the world and look for ways aimed at global welfare. Our relations with Saudi Arabia is several years old. Our ancient relations has built a strong foundation for our strategic partnership, said Modi

Delivering the key note address in Saudi, Prime Minister Modi said that India and Saudi Arabia's historic ties have stregthented stratergic partnership and that he has come to this meeting with aspirations of Indians. 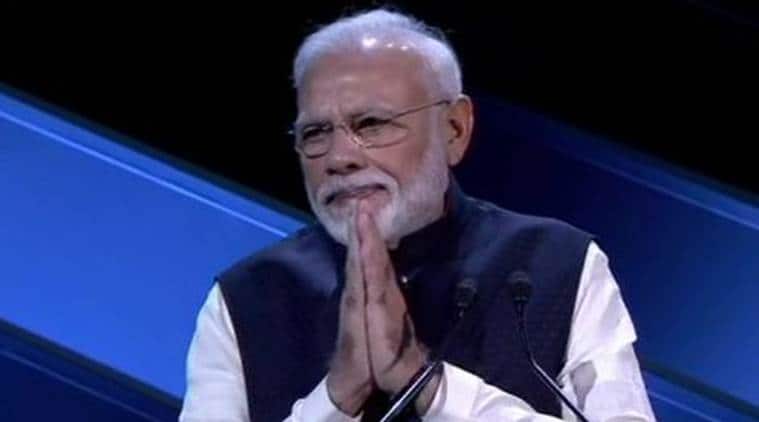 PM Modi, King Salman condemn terrorism in all its forms, agree to step up bilateral ties

Prime Minister Narendra Modi and Saudi King Salman bin Abdulaziz Al-Saud on Tuesday condemned terrorism in all its forms and manifestations, and agreed to step up bilateral security cooperation. Agreeing to step up bilateral security cooperation, the two leaders discussed cooperation in agriculture, oil and gas, maritime security, innovative technology, renewable energy, trade and investment between the two countries during their talks.

Prime Minister Modi who arrived in Riyadh late Monday night on a two-day visit, will deliver the keynote address under the title "What's next for India?'' at the forum. "I will speak about the growing trade and investment opportunities for the global investors in India as the country marches forward to a 5 trillion dollar economy by 2024," Modi said in his departure statement on Monday.

Saudi Arabia on Tuesday announced that 23 investment agreements totalling more than 15 billion dollar in value were signed on the first day of a three-day high-profile financial summit, being attended by Prime Minister Narendra Modi and several other world leaders. "Totaling more than USD 15 billion in value, these agreements were exchanged by signatories in a dedicated ceremony held at the Ritz-Carlton hotel in Riyadh. Coordinated under Invest Saudi," the Saudi Arabian General Investment Authority (SAGIA) said in a statement. Speaking at the forum, Mukesh Ambani, Chairman and Managing Director of the Reliance Industries Limited, said, "The youth of India are our driving force, and the reason India will propel itself to be the 3rd largest economy in the world."

From a purely buyer-seller relationship, we are now moving toward closer strategic partnership: Modi on India- Saudi ties

In an interview published in the Arab News newspaper on Tuesday, Prime Minister Narendra Modi said Saudi Arabia is India's second-biggest supplier after Iraq. It sold 40.33 million tonnes of crude oil to India in 2018-19 fiscal, when the country had imported 207.3 million tonnes of oil. “From a purely buyer-seller relationship, we are now moving toward a closer strategic partnership that will include Saudi investments in downstream oil and gas projects,” he said. Modi said that stable oil prices are crucial for the growth of the global economy, and praised the Kingdom’s role as an important and reliable source of India’s energy requirements.

India has long-standing ties with Jordan

India has long-standing ties with Jordan and the Modi government has shown a marked preference for strengthening the relationship with the country. Modi had met King Abdullah for the first time on the sidelines of the UNGA in September 2015. This was followed by a visit by the then president Pranab Mukherjee to Jordan in October 2015, the first by an Indian head of state to the Middle East nation. India has been donating money for humanitarian assistance to the country.

PM Modi, Jordanian King to speak at the financial forum

Both Prime Minister Modi and the Jordanian King will speak at the financial forum, which will also host financiers, governments, and industry leaders who would discuss global trade and explore the trends, opportunities and challenges shaping the global investment landscape over the coming decades. Jordan is home to more than 10,000 Indians, who are employed in different sectors such as textile, construction and manufacturing, fertilizer companies, health sector, universities, IT, financial companies and multilateral organisation.

A good beginning to the day!

Prime Minister Narendra Modi met King Abdullah II of Jordan here and the two leaders exchanged views on working closely together to strengthen the bilateral ties in different sectors, specially in trade and investment. The two leaders met in the Saudi capital on the sidelines of the high-profile 'Future Investment Initiative', a key financial forum dubbed as 'Davos in the Desert'.

Moving together towards greener pastures for future generations!

Here is the itinerary of PM Modi in Saudi Arabia

Followed by a banquet lunch by His Majesty, the King, Prime Minister narendra Modi will have a bilateral meeting with the King, where the agreement on the Strategic Partneship Council will be signed. There will also be separate delegation level talks with the Crown Prince of Saudi Arabia. Later in the afternoon, PM Modi  will be addressing the FII Plenary session. This will be followed by a banquet dinner hosted by the Crown Prince. Prime Minister will be leaving for Delhi the same night.

The leaders will also discuss enhancing defence and security cooperation. The first naval exercise between the two nations is tentatively lined up for December 2019 or January 2020.

The forum, beginning Tuesday, will host financiers, governments, and industry leaders who would discuss global trade and explore the trends, opportunities and challenges shaping the global investment landscape over the coming decades.

This is Modi's second visit to Saudi Arabia. During his first visit in 2016, King Salman conferred Saudi's highest civilian award on him. The Crown Prince visited India in February 2019, giving a further fillip to the bilateral ties. India's relations with Saudi Arabia have been on an upswing over the last few years. India's bilateral trade with Saudi Arabia was at $27.48 billion in 2017-18, making the Arab country its fourth largest trading partner.

Saudi Arabia last month said that it was looking at investing USD 100 billion in India in areas of energy, refining, petrochemicals, infrastructure, agriculture, minerals and mining.