Narendra Modi in Japan HIGHLIGHTS: Indian PM ‘one of my most dependable friends,’ says Shinzo Abe

Narendra Modi in Japan HIGHLIGHTS: During the two-day summit that began today, PM Narendra Modi will engage with Shinzo Abe on a range of issues including defence and regional security.

Prime Minister Narendra Modi on Sunday met his Japanese counterpart Shinzo Abe in Yamanashi for the 13th India-Japan annual summit. The two leaders will review the progress in ties and deepen strategic dimension of the bilateral relationship between India and Japan.

After dinner at PM Abe’s holiday villa in Yamanashi, the two leaders head to Tokyo. The two prime ministers spent about eight hours together, MEA officials said. In Tokyo, they will hold a formal summit on Monday, during which economic cooperation and strengthening bilateral security is expected to be high on the agenda.

During the two-day summit that began today, Modi will engage with Abe on a range of issues including defence and regional security. The two leaders also paid a quick visit to a company that is a leading manufacturer of factory automation.

Besides bilateral issues, the two leaders are expected to deliberate on a range of regional and global issues including the situation in the Indo-Pacific region. Modi will also address the Indian community function in Tokyo and will attend a series of business events and address the business forum. Modi said it will be his 12th meeting with Abe since he first visited Japan as prime minister in September 2014.

PM Narendra Modi will hold discussions with Japan Prime Minister Shinzo Abe during the 13th India-Japan annual summit in Tokyo. He will also interact with the Indian diaspora.

PM @AbeShinzo and I visited the FANUC Corporation, which has pioneered the usage and application of technology, particularly in robotics. pic.twitter.com/azKBfzwEla

Prime Minister Narendra Modi and his Japanese counterpart Shinzo Abe Sunday visited FANUC Corporation at Yamanashi, one of the largest makers of industrial robots in the world. 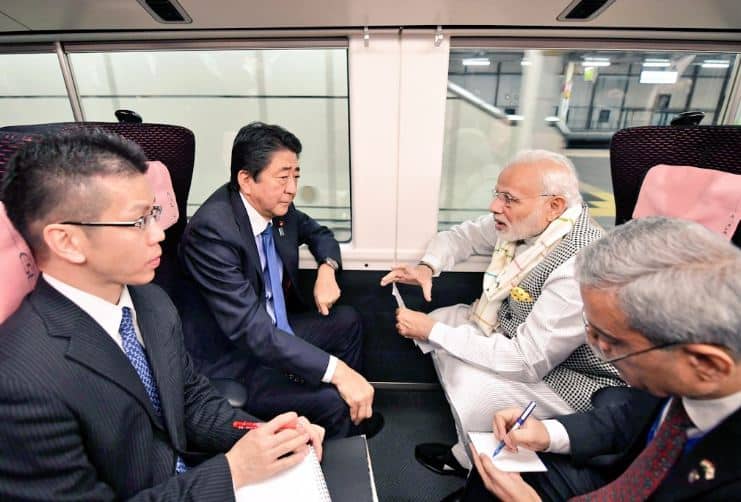 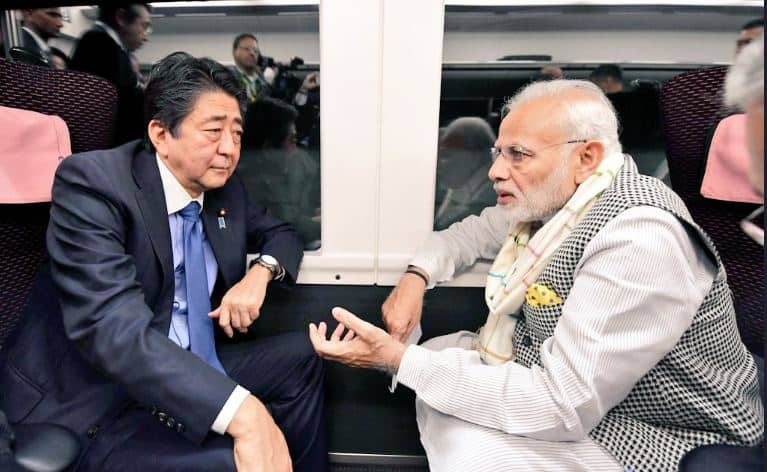 The warm Modi-Abe relationship has been built over 12 meetings, including four summits, since 2014. Such symbiosis, unusual in international relations, has, understandably, heightened interest in the 13th India-Japan Summit, scheduled on October 28-29 in Tokyo.

But expectations from Modi-Abe discussions must remain anchored in reality. Read more here

I am convinced that PM Modi's visit this time will also be fruitful as our previous meetings: Shinzo Abe

Prime Minister Abe said the annual mutual visits by the leaders of Japan and India are an "active driving force" for the advancement of Japan-India bilateral relations. "I am convinced that Prime Minister Modi's visit to Japan this time will also be fruitful as our previous meetings," he said.

At the same time, Abe hoped that Prime Minister Modi will enjoy the beautiful autumn in Japan, including the snow-capped Mout Fuji and autumn-tinted leaves, besides experiencing Japanese cutting-edge technology. Describing Prime Minister Modi as "one of my most dependable and valuable friends," Abe said he would be greatly pleased if his guest is impressed the same way as he was in Ahmedabad." (PTI)

“This is very special gesture PM Abe is making. We believe this is the first time a foreign leader is visiting PM Abe’s holiday home,” Foreign Secretary Vijay Gokhale was quoted saying by PTI on Thursday.

Yamanashi, at a distance of around 110 km from Tokyo, is surrounded by several mountains including Mount Fuji — the country’s tallest peak at around 3,776 metres.

In the afternoon of Sunday, Abe will host an informal lunch for Modi at a hotel, with view of Mount Fuji, and both the leaders will take a stroll at the grounds of the hotel.

Tete-a-tete in front of a fireplace.

Japanese PM @AbeShinzo hosted PM @narendramodi at his personal villa near Lake Kawaguchi in #Yamanashi. PM Modi is the first foreign leader to be invited to the villa. pic.twitter.com/CpPvzYJgQp

Taking our cooperation to modern and advanced technologies.

PM @narendramodi and PM @AbeShinzo visited the FANUC Corporation, one of the largest makers of industrial robots in the world in #Yamanashi, and toured the robotics and automation facilities. pic.twitter.com/o2mM4ER352

PM Modi one of my most dependable friends: Shinzo Abe

Japanese Premier Shinzo Abe Sunday said Prime Minister Narendra Modi was one of his most "dependable" friends and together with the Indian leader, he would like to strengthen bilateral cooperation to realise a free and open Indo-Pacific. In a message published in Indian newspapers on the day of the two leaders' summit meeting in Japan, Abe said India was driving the region and the world's prosperity as a global power. Prime Minister Modi was an outstanding leader of his great country, the Japanese premier said. "I have always believed and stated that the relationship between Japan and India is blessed with the largest potential in the world," he said. Japan-India cooperation continued to expand broadly in many fields such as security, investment, information technology, agriculture, health, environment and tourism, Abe noted.

Prime Minister Narendra Modi on Sunday presented his Japanese counterpart Shinzo Abe two handcrafted stone bowls and dhurries made from rose quartz and yellow quartz stone sourced from Rajasthan. A Jodhpuri wooden chest from Rajasthan with traditional work was also presented, an official said. The bowls were crafted by master artisan Shabbirhusen Ibrahimbhai Shaikh of Gujarat's Khambhat region, which is known for its practice of stone craft since generations and is also a leading hub for exports of stone products from India."The uniqueness of this craft lies in the fact that the form of the product is scooped out from a block of stone, and then shaped and refined using basic hand tools generally without any lathe machines," the official said. Hand-woven by the master weavers of Mirzapur in Uttar Pradesh, the dhurrie designs show the diversity of possibilities available -- from a symmetrical repeating geometric tessellation in one, to stylistic floral motifs arranged around the classical medallion pattern in another. "The dhurries use two distinctive Indian colour palettes. While one uses Indigo blues, reds and sprinkles of turmeric yellows, the identifying colours that have marked Indian textiles for centuries, the other uses the muted earthy tones of the Indian landscape," the official said. The stone bowls and dhurries were made under the design supervision of the prestigious Ahmedabad-based National Institute of Design. (PTI)PM Narendra Modi presented Japanese PM Shinzo Abe two handcrafted stone bowls made from rose quartz and yellow quartz stone and hand-woven Dhurries by the weavers of Mirzapur, UP, specially crafted on the occasion of his visit to Japan for India-Japan annual summit: Sources pic.twitter.com/M9ZDaeQWIC— ANI (@ANI) October 28, 2018

Prime Ministers @narendramodi and @AbeShinzo meet at Yamanashi. They would be holding talks through the day on deepening India-Japan ties. pic.twitter.com/T9eGZ3yuVx

On arrival in Tokyo, PM Modi greeted by the Indian diaspora

Close to 11 PM local time but the wait was worth every moment.

Proudly waving the Indian flag, the Indian diaspora in Japan enthusiastically greet PM @narendramodi on his arrival at the hotel in #Tokyo. 2 days of hectic engagement begins tomorrow. pic.twitter.com/syPx6r3vXW

In a statement on Friday, before leaving for Japan, Modi described India and Japan as a "winning combination" and said the island nation was New Delhi's most trusted partner in its economic and technological modernisation. "Japan today is one of the most trusted partners in India’s economic and technological modernisations and one of the top investors in India. Projects like Mumbai-Ahmedabad High Speed Rail and Dedicated Freight Corridors reflect the high level and strength of our economic engagement. Japan is also at the forefront of engaging in our national initiatives, such as ‘Make in India’, ‘Skill India’, ‘Digital India’, ‘Start Up India’, etc," he said

Prime Minister Narendra Modi left for Japan on Friday. In a statement on Friday, before leaving for Japan, Modi described India and Japan as a "winning combination" and said the island nation was New Delhi's most trusted partner in its economic and technological modernisation. "Landed in Tokyo. I am confident this visit will add new vigour to the strong friendship between India and Japan," Modi said in a tweet.