Narendra Modi with his council of ministers at the Union cabinet meet.

PM Modi government Day 1 HIGHLIGHTS: Prime Minister Narendra Modi-led NDA government’s first Union cabinet meeting was held today, a day after the PM and his council of ministers took the oath of office and secrecy. Among the top decisions taken by Modi-led cabinet, it was decided that the Parliament Session will commence from June 17, the Union budget will be presented on July 5 and the Speaker of Lok Sabha will be elected on June 19.

Also, a slew of orders were approved by PM which included changes to ‘PM’s Scholarship Scheme’ under National Defence Fund, PM-Kisan yojana has now been extended to all farmers.

PM Modi Day 1 HIGHLIGHTS: The Prime Minister will begin his second term in office today. Follow LIVE updates as we keep track of his day's engagement.

The budget will be presented in the first session of Parliament for the new government that begins June 17 and continues till July 26. This will be the debut budget of newly appointed Finance Minister Nirmala Sitharaman, who is the first full-time women finance minister of India. The interim budget for the year 2019-20 was presented by then Finance Minister Piyush Goyal on February 1, 2019. Read more here

Economic survey will be tabled in the Parliament on July 4

Economic survey will be tabled on July 4 followed by the presentation of the budget on the next day. The session, which will begin from June 17, will have a total of 30 sittings. It will be the first budget of the Modi government in its second term and will be presented by Finance Minister Nirmala Sitharaman. The interim budget for the year 2019-20 was presented by then Finance Minister Piyush Goyal on February 1. (PTI)

Meanwhile, according to an official data released today India’s economic growth rate slipped to a five-year low of 5.8 per cent in January-March 2018-19, owing to poor performance in the agriculture and manufacturing sectors. The government also revealed that joblessness in the country stood at 6.1 per cent of total labour force during 2017-18, the highest in 45 years. Notably, the latest data from the labour ministry confirmed the unemployment rate projected in a pre-election leaked report.

In first meeting, Modi 2.0 cabinet approves extension of PM-KISAN scheme to all farmers

The previous BJP government had announced the Rs 75,000 crore Pradhan Mantri Kisan Samman Siddhi (PMKSS) in the interim budget. Under the scheme, the government decided to provide Rs 6,000 per year (in three equal installments) to an estimated 12 crore small and marginal farmers holding land up to 2 hectares. Already, 3.11 crore small farmers have so far received the first tranche of Rs 2,000 each under the PM-Kisan scheme and 2.75 crore peasants have got the second instalment as well, as per the official data.

Here are the top decisions taken by Modi's cabinet today

Addressing a press conference after the meeting, Union Minister Prakash Javadekar told reporters that the first two days of the session will be devoted to swearing-in of the newly elected MPs while the Lok Sabha speaker will be elected on June 19.

1. The Parliament Session is scheduled to begin from June 17.

3. The Speaker of Lok Sabha will be elected on June 19.

Glad that path-breaking decisions were taken in the Cabinet, the first in this tenure. Hardworking farmers and industrious traders will benefit greatly due to these decisions.

The decisions will enhance dignity and empowerment of several Indians. pic.twitter.com/U9JTXeyoVm

PM-Kisan Yojana to be extended to all farmers

#Cabinet approves extension of PM-Kisan yojana to all farmers. Nearly 14.5 crore farmers to benefit from the scheme. pic.twitter.com/v4zTCCEi4u

The NDF was established in 1962 to take charge of the voluntary donations in cash and kind received for promotion of the national defence effort, and to decide on their utilisation. Currently, the fund is being used for the welfare of members of the Armed Forces, Para Military forces and Railway Protection Force, and their dependents. The fund is administered by an Executive Committee led by the Prime Minister and includes Defence, Finance and Home Ministers as Members.

The ‘Prime Minister’s Scholarship Scheme (PMSS)’ was administered to promote technical and post-graduate education for the widows and children of the deceased/ex-service personnel of Armed Forces and Para Military Forces and Railway Protection Force. Read more here

Our Government’s first decision dedicated to those who protect India!

Continuity with change to be hallmark of Indian Railways next five years: Piyush Goyal

Piyush Goyal took charge of the railway ministry on Friday and said he was happy that Prime Minister Narendra Modi had reassigned the portfolio to him as it would mean "continuity" in the work of the ministry. He said that improving passenger experience and modernising the railways would be his focus areas.

Continuity with change to be hallmark of Indian Railways next five years: Piyush Goyal while taking charge of Railways ministry again. @IndianExpress pic.twitter.com/8tqAmethey

Prakash Javadekar takes charge as Minister of Information and Broadcasting

Subrahmanyam Jaishankar is a former diplomat who previously served as Foreign Secretary.

ICYMI: Here is the full list of Union Council of Ministers with their portfolios. PM Modi clearly signaled his political weight in the government by placing Home Minister Amit Shah as second most senior in the ministerial pecking order just after Defence Minister Rajnath Singh.

Dal Raisina: All you need to know about the special delicacy served in Rashtrapati Bhavan

The highest ever number of 8,000 guests, including VVIPs, attended the swearing-in ceremony of the prime minister and his Council of Ministers Thursday. Rashtrapati Bhavan kitchen's specialty 'Dal Raisina' was served to foreign delegates in the banquet. Chef Machindra Kasture, who first made the dish in 2010, claims it takes between six and eight hours, the current Rashtrapati Bhavan chef, Monty Saini, says it takes no less than 48 hours to cook.

Chef Kasture tells indianexpress.com, “It is such a big honour to have your dish being served to world leaders even now. We used to continuously experiment in the Rashtrapati Bhavan kitchen, and Dal Raisina was created at one such occasion.” He worked as the first resident chef of the Rashtrapati Bhavan from 2007 to 2015.

Ravi Shankar Prasad retains Ministry of Law and Justice; Ministry of Communications; and Ministry of Electronics and Information Technology

Prakash Javadekar remains Minister of Environment, Forest and Climate Change; and Minister of Information and Broadcasting.

BJP president Amit Shah will be the Home Minister in the newly constituted Cabinet under PM Narendra Modi. He is taking over from Rajnath Singh, who has been given the Defence Ministry.

Shah will now at the forefront of Narendra Modi's second government.

Nirmala Sitaraman, who is the outgoing defence minister was handed over the Finance Ministry.

Arun Jaitley, who handled the finance ministry earlier, opted out of the government citing health reasons.

Smriti Irani, the youngest in the Cabinet got the two ministries. Women and Child development ministry and textiles.

S Jaishankar has been introduced newly in the Cabinet and got ministry of External affairs.

After 57 members took oath as Cabinet ministers yesterday, the portfolio was  announced today. Rajnath Singh has been appointed as the new Defence Minister, Amit Shah is given the Home Ministery, S Jaishankar has been given the External Ministry.

In the bilateral meeting today, Sri Lankan President Maithripala Sirisena congratulated PM Narendra Modi and reiterated his desire to work together to strengthen relations between the two countries for peace, prosperity and security in the region. The leaders noted that terrorism and extremism continue to pose threat to humanity and committed to closer bilateral cooperation for peace and security in South Asia and the Indian Ocean region.

Nirmala Sitaram, who took oath as a Cabinet minister on Thursday was handling the Defence Ministry so far. She first held the important portfolio of Commerce & Industry before being elevated to the Defence. She became the second woman to assume the charge of the Defence Ministry as former Prime Minister Indira Gandhi had also held the portfolio in the seventies. During her tenure as Defence Minister, Sitharaman has been actively involved in the modernisation of forces and safeguarding the ambitious Rafale deal which came under the scanner after the opposition alleged massive corruption on part of the Modi government.

Mauritius Prime Minister Pravind Jugnauth, who was also the chief guest at the Pravasi Bharatiya Divas this January, is seen as one of the most well-placed People of Indian Origin in the world. Since Modi has invested diplomatic capital in his outreach to the Indian diaspora since 2014, this invite is seen as “a natural choice”.

From SAARC to BIMSTEC

New Delhi’s engagement with BIMSTEC rose from the ashes of SAARC. In October 2016, following the Uri attack, India gave a renewed push for the grouping that had existed for almost two decades but been largely ignored. Alongside the BRICS summit in Goa, Modi hosted an outreach summit with BIMSTEC leaders.

By inviting leaders from BIMSTEC countries to his swearing-in ceremony, sources said, Modi has made a carefully calibrated move that signals a major outreach to India’s neighbourhood from the Bay of Bengal to Central Asia, as well as the Indian diaspora.

Door opens to outside talent: S Jaishankar steps in Subrahmanyam Jaishankar, on Thursday, he became the first former Foreign Secretary to become a Cabinet minister. Jaishankar, a career diplomat from the 1977 batch, was handpicked by Prime Minister Narendra Modi for the post of Foreign Secretary in January 2015. After he became Foreign Secretary for a two-year term, Jaishankar shaped policies in line with Modi’s idea of an aspirational and assertive India — from the outreach to West Asian countries, including the UAE and Israel, to negotiations with Japan on the nuclear deal; from playing hardball with the Chinese on Doklam to the Belt and Road Initiative and Nuclear Suppliers Group.  Read More 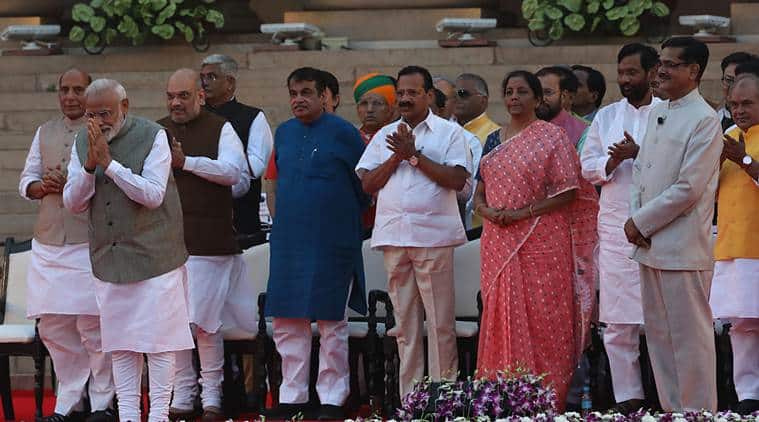 The first meeting of the new 57-member Council of Ministers will take place at 5:30 pm.  Prime Minister Narendra Modi, who will begin his second term in office today,  introduced a total of 24 new faces in his cabinet.  Former Foreign Secretary S Jaishankar's  entry  as Cabinet minister has come as surprise.  Meanwhile, former External Affairs Minister Sushma Swaraj found no place in the new government, as did 36 others from the previous Council of Ministers. Prime Minister Narendra Modi was sworn in along with a 57-member Council of Ministers that included his trusted lieutenant and BJP president Amit Shah and a surprise entrant, former Foreign Secretary S Jaishankar, as Cabinet ministers. Amit Shah has been made in charge of the Home Ministry given to him. Rajnath Singh, who was the Home Minister earlier, became the Defence minister. S Jaishankar, who is a new entry, has been given the External Ministry.