Amin was alleged to have been involved in disposing of the body of Sohrabuddin Sheikh’s wife Kausarbi in 2005. The CBI case is that although Amin was not part of the Gujarat ATS, which carried out the encounter, he was in constant touch with other accused including officers D G Vanzara and R K Pandian. 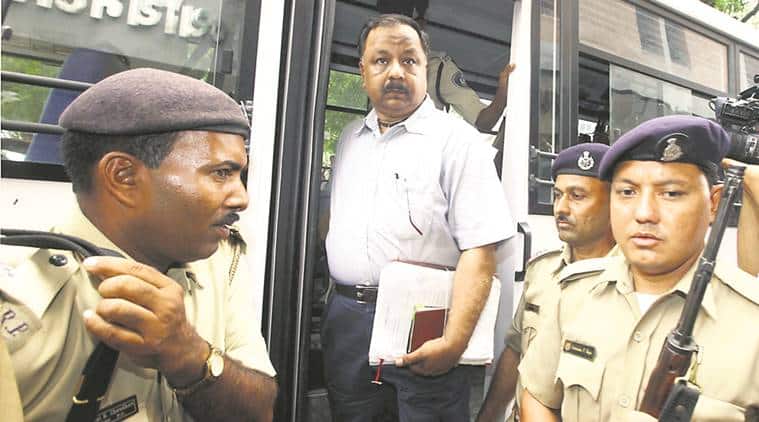 On Independence Day, Tapi (Gujarat) SP Narendra K Amin tweeted: “I and other ranks may have recd… May be an auto SMS but the concerns and cares 4 us by govt is unique in the Indian history.THx MY GOVT.” With the tweet he attached an SMS, purportedly sent from ‘MyGov’ on Independence Day, which is quoted as: “… PM Modi salutes your bravery, valour & sacrifices. Thank you for keeping 125 crore Indians safe.” Amin’s Twitter page has a picture of him shaking hands with PM Narendra Modi.

Amin has been vocal ever since he came out on bail after spending about eight years in jail in the encounter cases involving the deaths of Sohrabuddin Sheikh and Ishrat Jahan. On August 31 last year, the day he was to retire, the state government extended Amin’s service and that of deputy SP Tarun Barot for one year, which ends this month. Now, their extension has been challenged in the Supreme Court, which raised questions about the decision Wednesday.

The government has been claiming the decision is well within the state laws and based on the officers’ “outstanding performances”. The challenge has come from retired IPS officer Rahul Sharma on the ground that the appointment is illegal and that the two officers are facing serious criminal charges.

Amin was alleged to have been involved in disposing of the body of Sohrabuddin Sheikh’s wife Kausarbi in 2005. The CBI case is that although Amin was not part of the Gujarat ATS, which carried out the encounter, he was in constant touch with other accused including officers D G Vanzara and R K Pandian. On August 2016, Amin was discharged by the special CBI court in Mumbai on the ground that “there was no sufficient materials to frame charges against him.”

In the Ishrat encounter, Amin was accused of firing at her and her companions in June 2004. He is out on bail in that case.

In its defence of the extension of Amin’s service, the government filed an affidavit Wednesday reiterating that his performance has been “outstanding.”

Recently, Amin was in a fresh controversy after Congress MLA Punabhai Gamit alleged Amin approached him to join the BJP ahead of the Rajya Sabha elections, a charge denied by Amin who has threatened legal action for defamation. “I challenge puna Gamit and Shaktisinh to prove their allegation or else ready to face the CONSEQUENCES thereof to drag and defame SP Tapi,” Amin tweeted.

Also, a journalist from Tapi approached Gujarat High Court seeking an FIR against Amin on the ground that he was confined at the SP office and stripsearched. The court asked the IG (Surat) to probe the allegation.

Amin, an MBBS, joined Gujarat police in 1996 as DSP. In 2007 he was arrested by the CID (crime) in the Sohrabuddin encounter and was in jail until 2015. Last year after the announcement of several promotions, he moved the Central Administrative Tribunal seeking elevation as an IPS officer; the case is pending.