🔴 In August, the Mizoram government announced that schools across the state would enrol refugee children on “humanitarian grounds”. 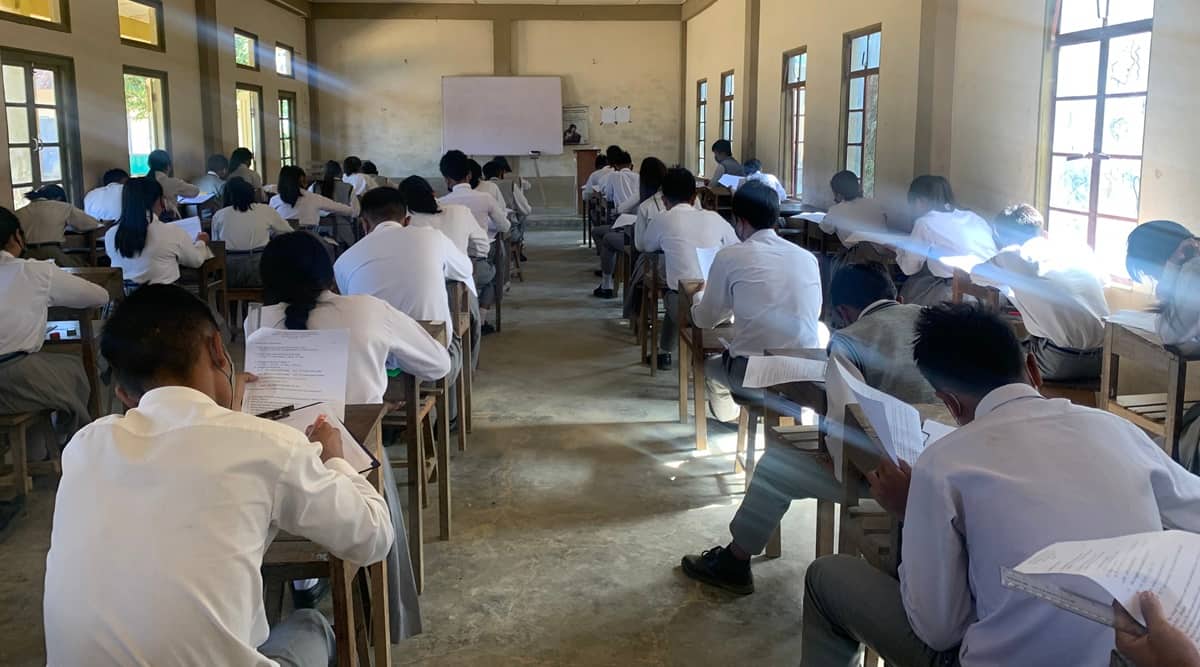 There are more than 2,000 Myanmar refugees currently enrolled in schools in Mizoram. (Express photo by Tora Agarwala)

Failure is the pillar of success, the headmaster says. She nods, her eyes downcast. The exam had not gone well.

“She was nervous,” explains the headmaster, as the student walks away to join her friends. “It was her first exam, after all.” The student, who turned 16 last month, is a refugee from Myanmar.

In August, the Mizoram government — which has welcomed the refugees fleeing a military coup in Myanmar, defying a directive by the Centre — announced that schools across the state would enrol refugee children on “humanitarian grounds”. The 16-year-old is among the 2,100 refugee students estimated to be enrolled in schools in the state.

She took admission, along with three other refugee girls and three boys, in Class 9 in a government school in Farkawn in Champhai district. Normalcy has been rare since they fled Myanmar in April, and the school offers that. “It is nice to wear the uniform and attend class,” says the 16-year-old.

The family left Myanmar carrying just a few clothes and blankets, not able to take even essential documents like the 16-year-old’s school certificates. At the Tiau river on the forested international border, the Indian Army shooed them away. But the family managed to find an alternative route, and eventually, a home — a modest one-room rented accommodation in Farkawn, a border town.

Must Read |Amid fresh violence in Myanmar, over 1,000 refugees have crossed over into Mizoram, says govt data

She, her brother (14) and their parents sleep on the floor on a mattress, and are dependent largely on aid from local NGOs and money from an aunt in Australia. Her father sometimes sells petrol filled in plastic bottles by the roadside.

The mother says uncertainty now marks their life. “We do not know when we will go back home. But at least now I sleep peacefully thinking my child is going to school.”

However, for the children, the transition is an everyday trial. While most of them, belonging to Chin state in northwest Myanmar, understand Mizo, they can’t fluently speak or write it — a hurdle in the classroom.

In Champhai, the district with the most number of refugee students (743) enrolled in schools, the principal of a government-aided school run by missionaries says his only advice to parents was that the students must “brush up basic Mizo”. “The students in my school come from slightly better-off families. The parents approached me saying their children were desperate to study,” he says.

“They struggle to follow lessons, take notes,” says the headmaster at the Farkawn school. “Our medium of instruction is English, but their English is weak.”

To help them, the faculty has introduced remedial language classes in Mizo and English from 3 to 4 pm after school. The headmaster says these have helped.

There are logistical challenges, too. The principal of a school in Champhai town says he admitted several children in classes lower than the ones they were in. “We filled up Class 10 forms earlier in the year, and it is difficult to accommodate new students mid-year. So we just admitted them in Class 9,” he says.

The state government opened its schools for them in August citing the RTE Act. (Express photo by Tora Agarwala)

Moreover, it is unlikely that the refugee students would be able to sit for Class 10 and 12 exams under the Mizoram Board of School Education, with proof of an Indian identity etc must for registration. An Education Department official admits that might be an issue. “A refugee student would not have those kind of documents… What we are doing… it is a stopgap measure to provide them a sense of security and normalcy,” he says.

Since the military coup in Myanmar in February, approximately 15,000 refugees, including about 25 legislators, have crossed into Mizoram, as per records, with some since going back.  The state government opened its schools for them in August citing the RTE Act.

A teacher says the refugees are gradually assimilating. “They go to church, collect firewood with the other children.” After school, the girls walk back home in groups of twos and fours, arms linked.

Teachers have also been doing home visits, especially to meet students who are taking classes online. One of them says, “The previous evening, a few of my students told me their homes were set on fire. It helps them to share this with us.”

A Class 10 student, who is a Farkawn local, says that they were “no different” from them. “They understand Mizo. We give them company, we entertain them, we stay with them but we do not ask them much about home,” she says.

But the memories haunt the 16-year-old, of “houses burnt, people killed, the suffering”. Some schools were burnt too, she says, with all of them shut since the coup. “We hear that many of our teachers are in jail. Internet has been cut off. My friends there have no chance to study.”

Being part of a school again means they have hope. As the teacher at Farkawn school asks the class what they want to be, the replies are prompt. “A businesswoman,” says the 16-year-old. “Nurse,” says her friend. “Model,” a third adds, shyly, as the classroom erupts into laughter.

More than 50 years ago, another crash, killing 5