Police officials said the incident happened around 7.30 pm when a large portion of the bridge fell on Dr DN Road. (Express photo by Prashant Nadkar)

Mumbai CST bridge collapse HIGHLIGHTS: A day later to Mumbai’s foot overbridge collapse, which claimed at least six people’s lives and left 31 left injured, the Brihanmumbai Municipal Corporation (BMC) suspended the supervisor of the structural audit, which was conducted six months ago, and a supervisor of the repair work. In its preliminary report released on Friday, the BMC stated that the structural audit, six months ago, was conducted irresponsibly and negligently and the audit failed to point out the impending failure.

The foot overbridge connecting north-end of Mumbai’s nodal Chhatrapati Shivaji Maharaj Terminus (CSMT) railway station to BT Lane near Anzuman Islam School collapsed on Thursday evening. Two of the dead have been identified as Apoorva Prabhu and Ranjana Tambe, nurses on their way to report for duty at GT Hospital.

Police officials said the incident happened around 7.30 pm when a large portion of the bridge fell on Dr DN Road affecting north-bound traffic on JJ flyover during peak hour. This is the second major collapse in last one year. Last year, Andheri’s G K Gokhale Road overbridge collapsed, killing two people. Ex gratia of Rs 5 lakh has been sanctioned to each family of the deceased, while Rs 50,000 will be provided to each injured, said CM Devendra Fadnavis.

The foot overbridge, whose structural audit was recently done, is maintained by the Brihamumbai Municipal Corporation. The structural audit had proposed minor repair to the FOB. Read | Among dead, three nurses, two in hospital they worked

Collapsed FOB to be dismantled, first probe report in 24 hours

A day after a foot overbridge connected to CSMT railway station collapsed, killing six persons and injuring 31, the Brihanmumbai Municipal Corporation has decided to dismantle the structure. In a meeting chaired by BMC commissioner Ajoy Mehta Friday morning, it was also decided that the civic body's Chief Engineer (Vigilance) would conduct an inquiry into the causes that led to the deck of the FOB collapsing on Thursday
evening. PTI Nurses and other staffs at GT hospital held a condolence prayer meeting for the victims of CSMT FOB tragedy. (Express photo by Nirmal Harindran) 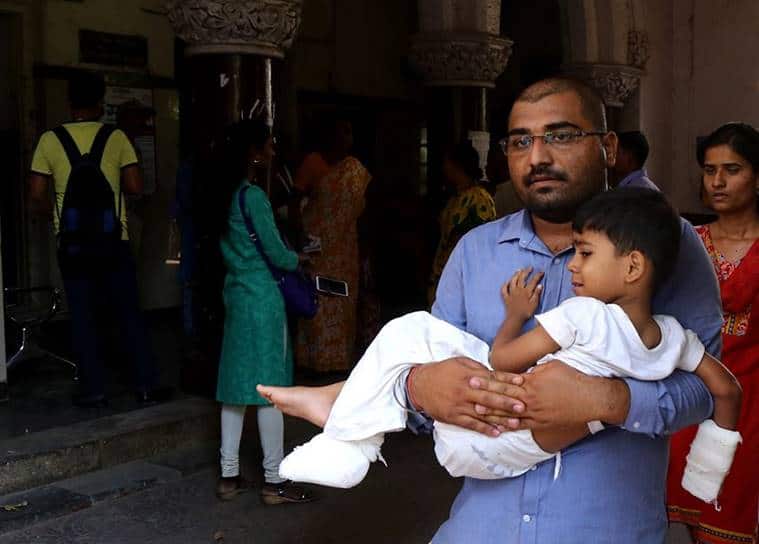 Central Railway officials Friday said they were cleared off the blame after Brihanmumbai Municipal Corporation chief Ajoy Mehta instituted an inquiry into the collapse of the foot overbridge connected to CSMT station, PTI reported.

The Central Railway team had received massive flak on social media since last evening after the FOB had collapsed.

"Top BMC officials have admitted that the bridge was under the civic body's jurisdiction and maintenance. CR had no role to play in building it or maintaining it. Therefore, the question of police booking railway officials for negligence in connection with the FOB collapse does not arise," a senior CR official told PTI.

Deputy Commissioner of Police Manjunath Singe, Mumbai Police spokesperson said that first it will be verified what responsibility does the BMC and Central Railway have and based on the findings, they will take a call. 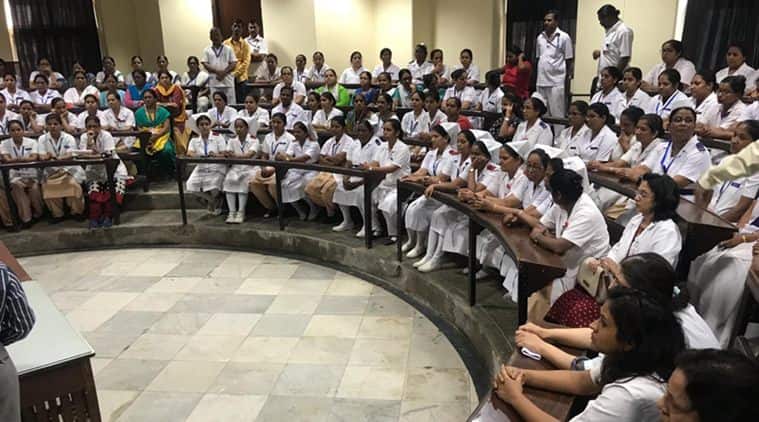 Primary responsibility will be fixed by this evening: Fadnavis

"It is shocking that such an accident can take place even after a structural audit. Primary responsibility will be fixed by this evening. I have asked civic chief (Ajoy Mehta)to find out names of those responsible," Fadnavis said.

High-level inquiry will be done to probe into the matter: Devendra Fadnavis

After meeting those injured in the footover bridge collapse in Mumbai, Maharashtra Chief Minister Devendra Fadnavis said, "There are around 10 injured admitted in the ward, one in ICU; all out of danger now. A high-level inquiry will be done to probe into the matter. FIR has been lodged."

CM Fadnavis at the spot where foot overbridge collapsed 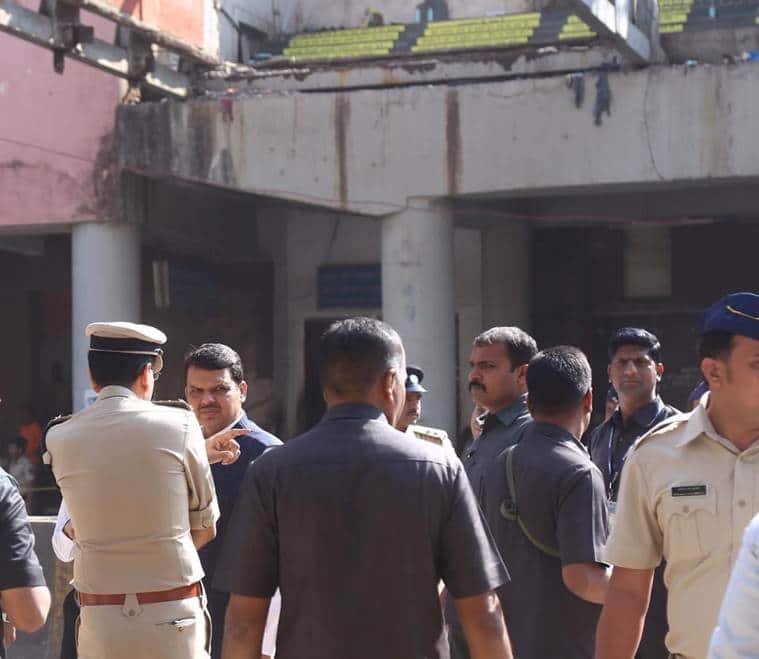 Maharashtra: Morning visuals from the spot where part of a foot over bridge near CSMT railway station collapsed in Mumbai yesterday. 6 people had died in the incident. pic.twitter.com/4qQ909Zznc

CM @Dev_Fadnavis ordered high level enquiry into #MumbaiBridgeCollapse incident and announced ₹5 lakh for the next of the kins of deceased and ₹50,000 to the injured and their medical expenses will be borne by GoM. pic.twitter.com/k6mR5PCGzb

Collapse to be probed jointly by BMC and Central Railways

The collapse will be jointly probed by BMC and Central Railways, said Vinod Tawde, District Guardian Minister of Mumbai. "I have discussed the issue with Chief Minister Devendra Fadnavis as well as with CR General Manager D K Sharma, BMC chief Ajoy Mehta and joint police commissioner (L&W) Deven Bharti. The railways and the BMC will jointly inquire the accident," Tawde told reporters.

Among dead, three nurses, two in hospital they worked

Three of the six dead in the foot overbridge collapse at the CSMT railway station Thursday were nurses at Gokuldas Tejpal (GT) Hospital nearby — two of them were rushed to the same hospital they worked at. Hospital staff said that while they were prepared for casualties, they were stunned when they saw the first few patients wheeled in: Apurva Prabhu (35) and Ranjana Tambe (40), both nurses at the hospital who were on their way to begin their night shift. READ MORE HERE

Six months ago, audit report declared FOB ‘fit to use’

Officials said the FOB is around 35 years old and last repair was undertaken in 2010-11. “In 2016, under Swachh Bharat Abhiyan, the northern end of the bridge was taken up for beautification but not repairs. The plan included changing the tiles of the bridge and new paint,” said an official.

Bridge declared ‘fit to use’ only six months ago

The foot overbridge (FOB) that collapsed on Thursday killing six persons and injuring 31, had been declared “fit for use” in a structural audit report submitted just six months ago.

The tragedy has led to questions being raised over the quality of the survey exercise itself. Over two years, contractors appointed by the municipality had audited all the 314 bridges, subways and skywalks in Mumbai. READ FULL REPORT
Among dead, three nurses, two in hospital they worked

Three of the six dead in the foot overbridge collapse at the CSMT railway station Thursday were nurses at Gokuldas Tejpal (GT) Hospital nearby — two of them were rushed to the same hospital they worked at.

Hospital staff said that while they were prepared for casualties, they were stunned when they saw the first few patients wheeled in: Apurva Prabhu (35) and Ranjana Tambe (40), both nurses at the hospital who were on their way to begin their night shift. READ  FULL REPORT HERE

Mohan Kayangudi, who worked it Zaveri Bazaar passed away at Gokuldas Tejpal hospital in Mumbai, increasing the death toll to 6. ANI reported that Mumbai Police has registered a case to investigate the bridge collapse.

NDRF team was withdrawn from the accident spot

NDRF team was withdrawn from the accident spot at 10.34 pm after the completion of the rescue operation, ANI reported. Five people have died and 31 have been injured in the incident where part of a foot overbridge near CSMT railway station collapsed in Mumbai earlier this evening.

Priority is to look after injured first, accountability will come next: Girish Mahajan

Maharashtra Minister Girish Mahajan after meeting the injured at GT Hospital: "There are sufficient no.of doctors here, the experts are here. There is sufficient blood available in the blood bank. Accountability will come next, our priority is to cater to the injured first." (ANI)

Taking injured to safety is of utmost importance, being done at a war-level: Ranjit Patil

Dr Ranjit Patil, MoS Home, Maharashtra reacted to the footover bridge collapse: "Footover bridge near ToI Mumbai collapsing is a tragic incident. CM has immediately called for a meeting with BMC commissioner and Railway Ministry. Taking the injured to safety is of utmost importance and it is being done at a war-level." (ANI)

Mumbai CST bridge collapse HIGHLIGHTS: In July last year, a part of a 47-year-old road overbridge (ROB) across the railway line at Andheri collapsed on the tracks between Andheri and Vile Parle stations on the Western Railway’s (WR) suburban line, killing two people. According to the yearly audit conducted by the Railways, the ROB was among eight such bridges that needed repair.