SP Mulayam Singh Yadav Funeral Highlights: According to the party, the cremation is scheduled to take place around 3 pm. Meanwhile, a sea of people gathered for the last rites of Mulayam Singh Yadav at his native Saifai village in Etawah district of Uttar Pradesh, amid the cloudy sky and intermittent morning drizzle. His mortal remains were brought to Saifai Monday evening. According to an official statement issued in Lucknow, UP Chief Minister Yogi Adityanath had reached Saifai and paid tributes to Yadav yesterday evening. He also paid floral tributes on behalf of Prime Minister Narendra Modi and Uttar Pradesh Governor Anandiben Patel and the Uttar Pradesh government, the release said.

Yadav, born on November 22, 1939, rose in UP politics in a period of intense social and political ferment after the 1970s. Emerging as a socialist leader, Mulayam established himself as an OBC stalwart, capturing a swathe of political space vacated by the Congress. He first took oath as UP’s 15th CM in 1989, which marked the year when the Congress was voted out, failing to return to power in the state ever since.

His politics might have seen twists and turns, but two things remained constant in Samajwadi Party founder Mulayam Singh Yadav’s parliamentary career: his stand on “China’s threat to India” and his opposition to the Women’s Reservation Bill.

Yadav was first elected as an MP in 1996 from Uttar Pradesh’s Mainpuri, a constituency he won five times including in the 2019 elections. Read more

We had a very strong relationship: Rajnath Singh at Mulayam's funeral

Union Defence Minister Rajnath Singh, who attended the last rites of Mulayam Singh Yadav, said: "We had a very strong relationship. Mulayam Singh Yadav was a big personality in Indian politics, it is a huge loss for the country. We all have come here to pay our tribute to him. PM Modi could not come here but he asked me to pay tribute on his behalf."

Actor Abhishek Bachchan, along with his mother actor Jaya Bachchan -- who is also a Samajwadi Party MP, reaches the ancestral village Saifai to pay their last respects to Mulayam Singh Yadav.

#WATCH | Uttar Pradesh: Actor Abhishek Bachchan along with his mother and Samajwadi Party MP Jaya Bachchan reaches the ancestral village Saifai to pay their last respects to former CM of UP, #MulayamSinghYadav pic.twitter.com/iok6ZFCuS4

'Antim darshan of Mulayam Singh Yadav at Saifai Mela ground has concluded. His body has been taken for cremation. 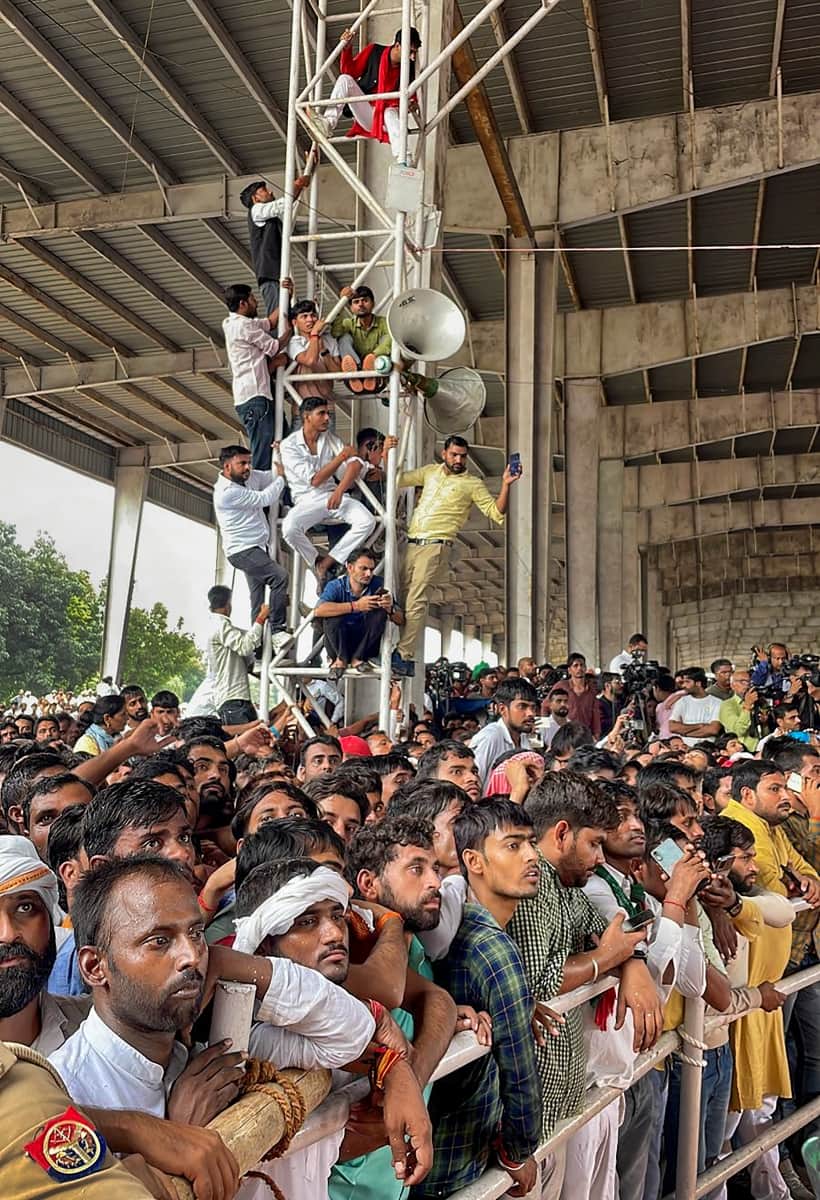 As huge crowds gathered in the pandal trying to reach the stage, Shivpal Singh Yadav appealed to maintain peace and order. He said that body will be taken for cremation soon.

His last rites will be performed with full state honours. pic.twitter.com/xeApBc5hM0

In Pics: Large crowds gather at Saifai Mela ground to pay last respects to their 'Netaji' 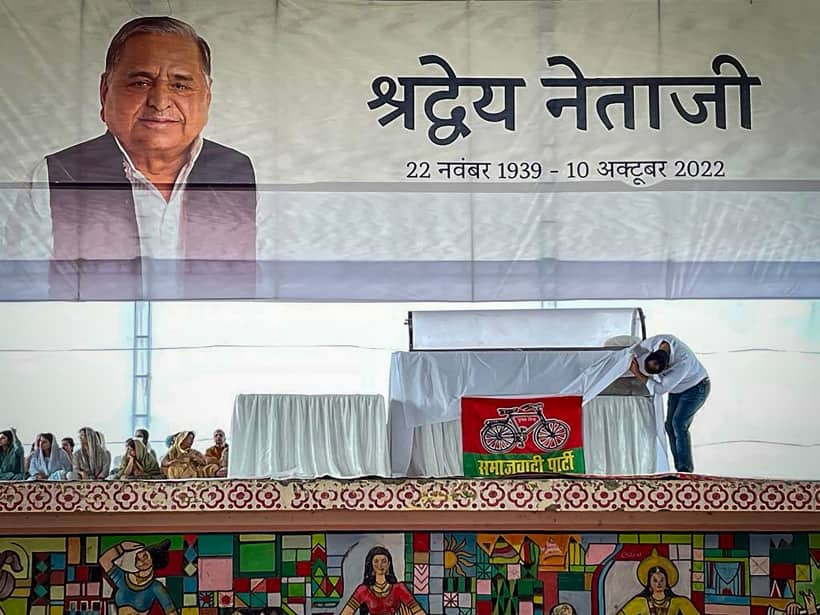 Shri @OfficeOfKNath and Shri @bhupeshbaghel will be attending the funeral ceremony of Late Shri Mulayam Singh Yadav as representatives of the Congress party. pic.twitter.com/PKvV0wYOuZ

In Pic: Preparation underway for the cremation at Saifai 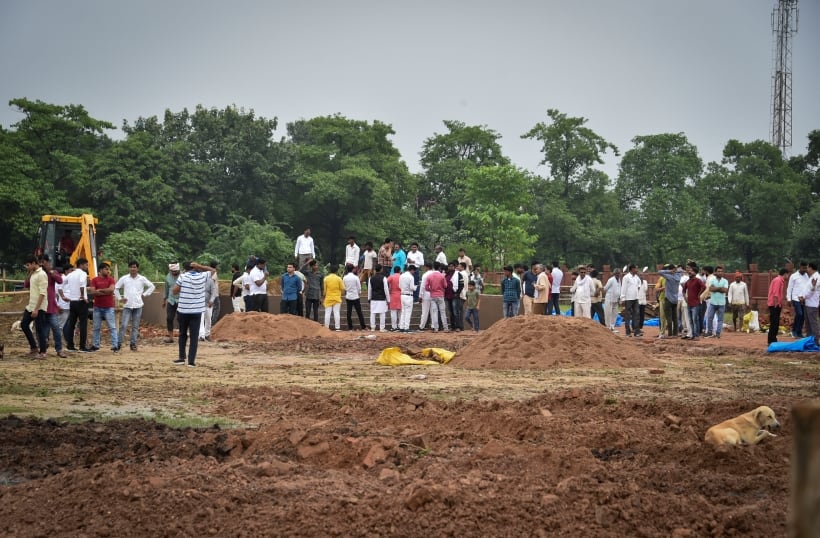 Mulayam Singh Yadav (1939-2022): A leader whose politics was shaped by the ground, not Twitter

Even death cannot destroy two things — the soul and memory. Memories emerge from the kritya (acts) of a person. Mulayam Singh Yadav will live on in the hearts and minds of people through his political acts.

Mulayam Singh, popularly known as Netaji, was the typical zameeni neta (grass roots-level leader). In the early years of his political career in Uttar Pradesh, he would go from village to village, sleep in khet- khaliyans and often eat lai-chana. The matti (soil) was a running theme throughout his life. He grew up in the soil of the akhada as a wrestler and then planted his politics in the soil itself and, for his entire political life, tried to speak for the backward, marginalised and minority groups. Badri Narayan writes

Saifai lines up at ‘Netaji’ home for a last glimpse: ‘He gave us energy’

As always, Mulayam Singh Yadav’s return to his village Saifai in UP’s Etawah drew hundreds of followers. They formed a queue nearly 5-km long on both sides of the road, their mobile cameras on, jostling to reach the bungalow painted in white to get a glimpse of their “Netaji”. But this time, the mood was sombre, the chatter muted, broken only by slogans of “Netaji Amar Rahein”.

For, inside the bungalow was Mulayam’s body, brought by his son Akhilesh Yadav, brother Shivpal Singh Yadav and cousin Ram Gopal Yadav, from a Delhi hospital where the SP founder breathed his last Monday morning.

Several CMs and other leaders are expected to attend the last rites to be held today pic.twitter.com/CkLVHVnCfK

Mulayam’s legacy: 5 ways in which he changed UP’s politics

If the first generation of leaders of Uttar Pradesh — as indeed of other parts of the country — were freedom fighters; the second generation — which emerged from the late sixties onward — were street fighters. Many of these leaders were socialists who cut their political teeth on campuses, fought vigorously for people’s causes, and acquired stature during and after the Emergency.

Mulayam Singh Yadav was the tallest and most prominent leader of this generation — a man who set new rules and benchmarks for political action in UP and, to a significant extent, other parts of North India as well. His passing marks the end of an era.

Leaders cutting across opposition parties condoled the death of Samajwadi Party patriarch Mulayam Singh Yadav on Monday. While former Prime Minister Manmohan Singh said Singh was a leader of high esteem who was respected by everybody irrespective of party lines, Congress president Sonia Gandhi said “the voice of socialist ideas has fallen silent” with his demise.

NCP chief Sharad Pawar said “Yadav gave a strong ideology to Samajwadi Party to stand strong against communal forces and worked towards creating a socialist society”, while Bihar Chief Minister and JD(U) chief Nitish Kumar said Yadav was a “towering socialist leader who never compromised with the interests of the poor and the farmers”. Odisha Chief Minister Naveen Patnaik said “the socialist leader will always be remembered for his contribution to uplift the downtrodden”. Read more

#mulayamsinghyadavRIP An old drawing for @IndianExpress.
Always a pleasure to sketch this maker of news and cartoons. pic.twitter.com/uZd2eh7cxQ

A wrestler-turned-teacher, Mulayam, who was born on November 22, 1939, in Etawah, completed his MA (political science) and B.Ed degrees. He was elected as an MLA for the first time from Etawah's Jaswantnagar in 1967 as a Samyukt Socialist Party (SSP) candidate, but lost the election in 1969 to the Congress’s Bishambhar Singh Yadav. Ahead of the 1974 mid-term polls, Mulayam joined Chaudhary Charan Singh’s Bharatiya Kranti Dal (BKD) and won Jaswantnagar seat on its ticket. He again won from this seat in 1977 on the Janata Party ticket. In the Ram Naresh Yadav government in late 1970s, he was co-operative and animal husbandry minister. In the 1980 polls, when the Congress bounced back, Mulayam lost his seat to the Congress’ Balram Singh Yadav. He later switched to the Lok Dal and was elected to the state Legislative Council as its candidate and also became the Opposition leader.

Saifai lines up at ‘Netaji’ home for a last glimpse: ‘He gave us energy’

As always, Mulayam Singh Yadav’s return to his village Saifai in UP’s Etawah drew hundreds of followers. They formed a queue nearly 5-km long on both sides of the road, their mobile cameras on, jostling to reach the bungalow painted in white to get a glimpse of their “Netaji”. But this time, the mood was sombre, the chatter muted, broken only by slogans of “Netaji Amar Rahein”.

For, inside the bungalow was Mulayam’s body, brought by his son Akhilesh Yadav, brother Shivpal Singh Yadav and cousin Ram Gopal Yadav, from a Delhi hospital where the SP founder breathed his last Monday morning.