Goel, who is currently on deputation and serving as the additional director general of Border Security Force (BSF) in Delhi, replaced Hitesh Chandra Awasthy, who retired from the services on Wednesday. 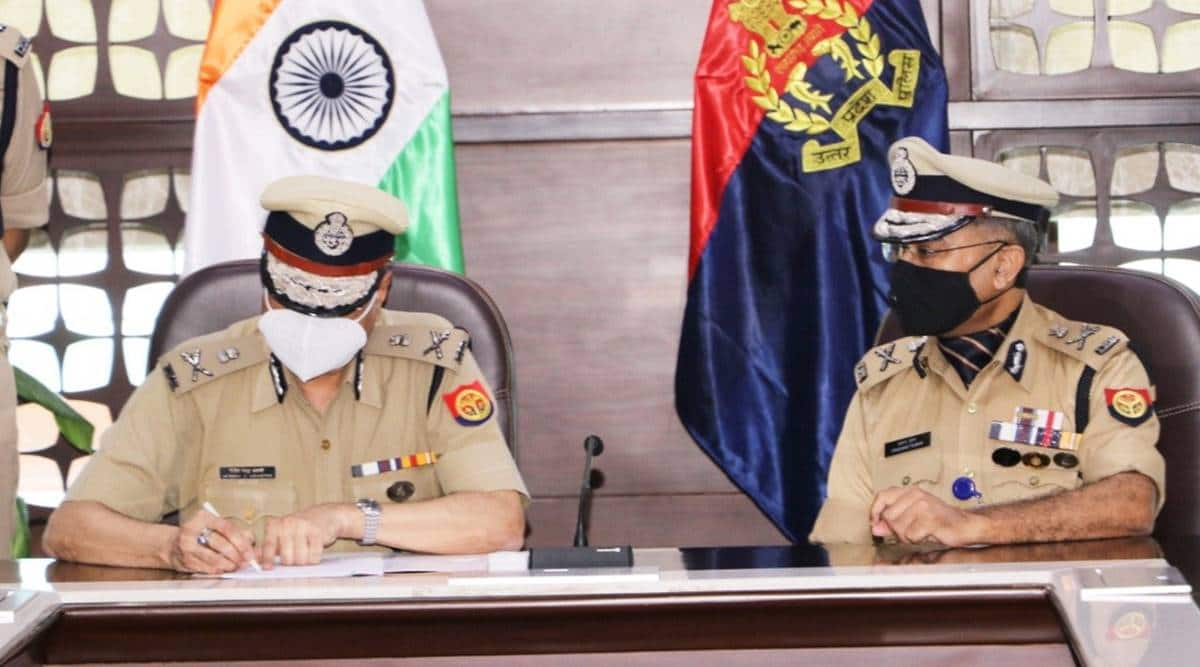 DGP UP HC Awasthy hands over charge to ADG L&O on his superannuation. (Twitter: UP Police)

Goel, who is currently on deputation and serving as the additional director general of Border Security Force (BSF) in Delhi, replaced Hitesh Chandra Awasthy, who retired from the services on Wednesday.

As per information, his deputation is to end in November, this year. Therefore, he would need permission for “premature repatriation” from the Ministry of Home Affairs (MHA) before he could take charge as the UP DGP. He is due to retire in February 2024.

A native of Muzaffarnagar district, Goel moved to Delhi on deputation in 2016 as IG, BSF. That was his second term on deputation. Earlier, in 2007, Goel had similarly served on deputation before returning to his parent cadre in 2012.

Goel was among several IPS officers who were suspended by the erstwhile Mayawati government for alleged irregularities in police recruitment. They were later reinstated by the then government and the case was closed.

Goel had earlier served UP Police in various capacities. He held the post of ADG (Law and Order) in 2013 after riots broke out in Muzaffarnagar and neighbouring districts.

He also held the post of ADG (CB CID) and ADG (Railway) before going on deputation in 2016.

He also served as police chief of several districts, including Mainpuri, Azamgarh, Gorakhpur, Varanasi, Saharanpur and Meerut. He was posted as DIG in Kanpur, Agra and Bareilly ranges.

Earlier in the day, Awasthy handed charge to Additional Director General, Law and Order, Prashant Kumar as the state government hadn’t announced his replacement at the time.

An IPS officer from the 1985 batch, Awasthy was appointed as the interim DGP on February 1, 2020, and had been posted as the state police chief since March 4, last year. He had been in the police force for more than 35 years.

“Director General of Police HC Awasthy is retiring today after completing 36 years in office. During his long service as an IPS officer, he served the country and the state as a good leader and sharp officer,” the CM’s Office tweeted earlier in the day.

“HC Awasthy played a good role during the pandemic period, as a member of Team 9 (a special task force put together by the state government to oversee the state’s Covid response),” it added.

Apart from Goel, two other officers were in the panel of three IPS officers to succeed Awasthy. They were Nasir Kamal, a 1986 batch IPS officer; and Rajendra Pal Singh of the 1987 batch.

A native of the national capital, Kamal is currently serving as the director of the National Institute of Criminology and Forensic Science, New Delhi, while Rajendra Pal Singh of Shahjahanpur is presently serving as DG, Economic Offence Wing (EOW) in UP.