Most of the villagers said they are farmers, and that many of them don’t have even their own land. The deaths of the six people Tuesday in the village, 140 odd km away from Shillong, came just before the second round of Assam-Meghalaya border dispute talks were to commence 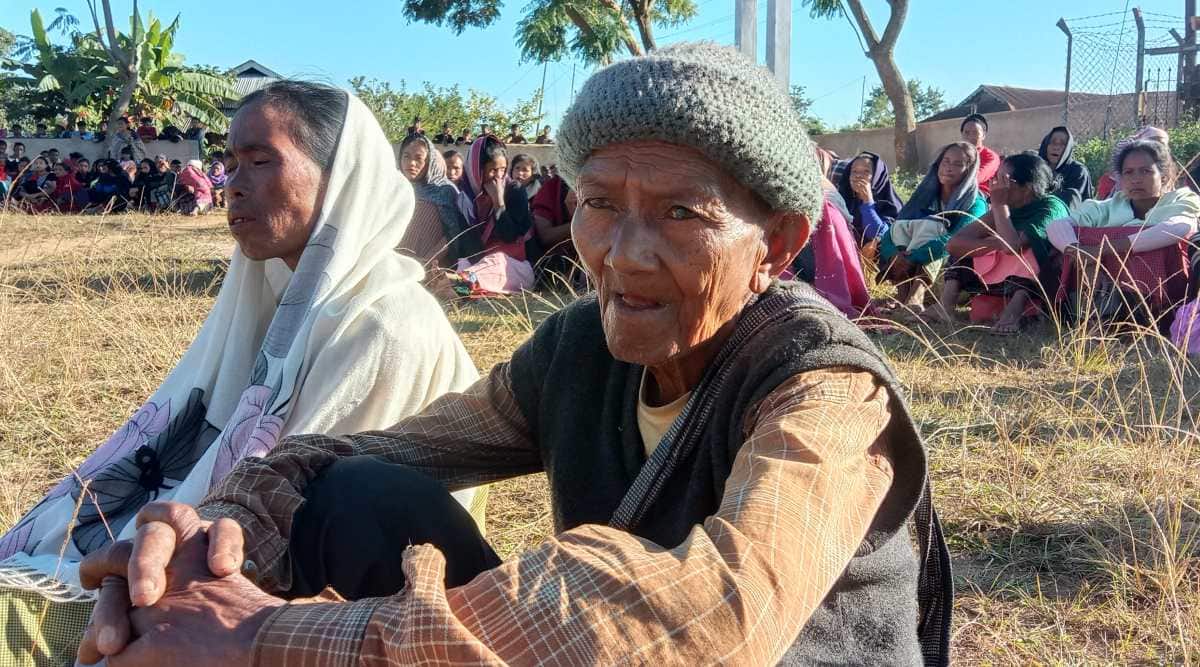 It was two days ago on a cold November morning that residents of Mukroh, a small hamlet along the Assam-Meghalaya border, were just waking up. What shook them from their slumber were several gunshots after which six people ended up in a pool of blood at the far end of the village.

Most of the villagers said they are farmers, and that many of them don’t have even their own land. The deaths of the six people Tuesday in the village, 140 odd km away from Shillong, came just before the second round of Assam-Meghalaya border dispute talks were to commence.

A special prayer service in progress for one of the persons killed in Mukroh firing at the local church. (Express Photo)

According to officials identified, Thal Shadap, 45, Sik Talang, 55, Chirup Sumer, 40, Tal Nartiang, 40, and Nikhasi Dhar, 65 were killed in the Assam Police firing. The body of the sixth person killed in the clash — Assam Forest Guard Bidyasing Lekhte — was handed over to the neighbouring state by authorities in Meghalaya.

Forty-eight hours later, both Assam and Meghalaya governments said the firing followed a purported timber smuggling bid, in which a truck carrying smuggled timber declined to halt at a forest check-post on the Assam side of the inter-state boundary and sped into Meghalaya. This, according to the official versions from both states, led to a hot chase by the Assam authorities who fired and punctured one of the tyres of the truck, immobilised it, and arrested the driver, a handyman, and another person.

Subscriber Only Stories
View All
At the end of the Bharat Jodo Yatra
Why BharOS has Indian developers excited and sceptical: ‘More choice is g...
UPSC Essentials | Weekly news express with MCQs: Republic Day, India-Egyp...
As India prepares for centralised power market shift, EU moves a differen...
Apply New Year promo code SD25
Also read |What is the Assam-Meghalaya border dispute, how the recent killing of six people impacts it

Since the vehicle was already in Meghalaya, an Assam Police team dispatched to recover it was met with resistance from an armed mob, officials said. In response, the Assam cops fired at the mob. This account was first given by the Assam Police soon after the incident. Meghalaya Chief Minister Conrad Sangma also said the same thing later but said the firing by the Assam Police was unprovoked, and an inhuman act that would not be tolerated.

Mukroh, however, has a different story to tell. The village headman Hamboide Sumer said Mukroh is not a disputed area and that Assam’s claim of timber smuggling is false. Simple farmers were killed without any reason, he added. “They were not smugglers. Even if they were, the Assam Police could not keep them contained and barged into a separate state. This is their failure. They should be arrested,” said Sumer.

Local MLA Nujorki Sungoh said the Mukroh firing is only one in a long chain of incidents. “This has nothing to do with smuggling. Whenever people carry grass or other stuff from the farms, they have to pay illegal tax to Assam authority,” he claimed.

The legislator added that contrary to the official version, four people were returning from their paddy fields in a vehicle with sacks of rice on November 22 when three of them were suddenly arrested by the Assam Police. The villagers got angry with the arrests and gathered to rescue the people and in the process, five of them were shot. “It all started when Assam forest officials arrested the three people from Mukroh village. It’s funny how they can arrest someone outside their jurisdiction,” Sungoh said.

Some villagers—Barlin Langshaing, Bianda Shadap, and Pyanoolad Kyandyah—spoke in a similar voice and said the Assam Police falsely blamed the farmers coming from their paddy fields with rice and accused them of being timber smugglers. They said the three people purportedly arrested by the Assam Police, who were forgotten in the public discussion in the aftermath of the firing, were taken to a nearby forest and beaten black and blue. They were later released unconditionally amid the mounting pressure over the firing incident, the villagers added.

They also claimed those killed on Tuesday didn’t even go to protest against the arrests made by the Assam Police but were simple passers-by going to their field who were unfortunately caught in the firing. They said the suspension and transfer of three Assam officers are not enough and the Meghalaya government should push for their arrest and strict action.

Sungoh said Mukroh villagers are harassed from time to time and despite being a partner in the government, he had raised the issue several times in the Assembly to say that extortion, illegal taxes, and illegal arrests have become the norm in such bordering villages but no action followed. Sungoh’s party, the United Democratic Party (UDP), is a partner in Meghalaya’s NPP –led Meghalaya Democratic Alliance (MDA).

N Tyngkan, a local Congress leader, said, “Both Assam and Meghalaya’s versions of timber smuggling are cooked-up stories. This government is trying to defend its functionaries. It is a failure of the government.”

The local police have declined to comment on the issue and said the law and order situation is normal in Mukroh and sufficient security personnel have been deployed to keep it that way.

Meanwhile, CM Sangma, soon after visiting the village, took to Twitter. “Stopped to meet with pressure groups in Mukroh who voiced their concerns over the firing incident that claimed 5 lives in the village Informed them about the next course of action that the Govt. is taking & assured them that the Govt will ensure justice for the victims,” he said in one of his tweets.

He said, “The visit to Mukroh today to pay respects to families of the 5 victims who lost their lives in the Mukroh firing incident was heart-wrenching. May God give the families strength in this difficult time. Meghalaya and its people mourns with them.”

“Condolence and Prayer Meeting for the victims of the firing incident at Mukroh joined by religious leaders and the various Rangbah Shnongs of Shillong. Meghalaya stands in solidarity with the families of the 5 victims who lost their lives in the incident,” the chief minister added.

The Williams crossed a desert barefoot to get to Spain from Ghana. Now, their sons are at the World Cup – playing for each country