Hearing a petition on the matter filed by former chief minister Digvijaya Singh, the HC asked the government to respond in six weeks on the alleged negligence in curbing communal clashes in Ujjain, Indore and Mandsaur. 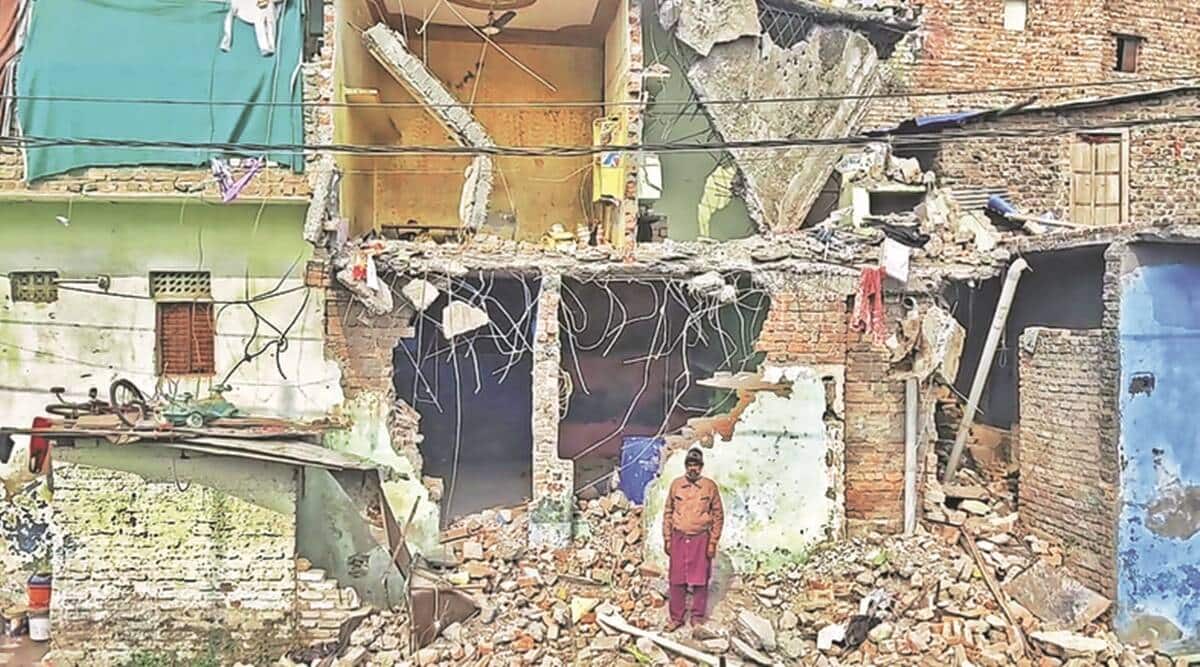 A house that was demolished in the action by the authorities that followed the violence in Ujjain district. (File/Express photo by Vishnukant Tiwari)

The Indore bench of the Madhya Pradesh High Court has issued a notice to the state government seeking its response in six weeks on the alleged negligence in curbing communal clashes in Ujjain, Indore and Mandsaur during the donation drive of funds for the construction of Ram temple in Ayodhya.

The bench of Chief Justice Mohammad Rafiq and Justice Sujoy Paul was hearing a petition filed by Rajya Sabha MP and former chief minister Digvijaya Singh in which he had moved court to issue directions to the state to enforce a Supreme Court ruling in cases of mob violence, communal violence and mob lynching.

Additional advocate general for state Pushyamitra Bhargav was given six weeks to respond to file a counter to the petition after he stated that it was on the day of the hearing that he had received an advanced copy of the writ petition.

In his petition filed on behalf of Digvijaya Singh, advocate Ravindra Singh Chhabra stated, “The Petitioner supports the pious work of construction of Shri Ram Mandir at Ayodhya, however the collection of funds/ donations must be voluntary and the members of minority community should not be coerced or threatened to pay donation for this pious purpose.”

It went on to elaborate that from December 2020, some organisations launched a fundraising campaign across Madhya Pradesh for the construction of the Ram Mandir in Ayodhya. These organisations in the guise of fund collection left behind a “trail of communal violence” and disturbed the communal harmony in the state, the petition stated.

The petition highlighted that incidents in Indore, Ujjain and Mandsaur demonstrate that an attempt to spread communal violence had been made in a “premeditated manner by the organisers of these fund collection rallies” while the officials responsible to ensure ‘law and order’ had acted in a “negligent manner”. It further added that officials in certain cases “witnessed the entire incident without taking any action against the wrongdoers”.

The chief secretary, the principal secretary (home), the DGP, the SPs of Ujjain, Indore and Mansaur, the Ujjain inspector general, and the collectors of Ujjain and Mansdaur were made respondents to the petition.

The petition also requested the court to issue directions for appropriate measures to be taken in cases of religious rallies to protect disturbance of public peace and breach of communal harmony.

The petition was filed after two representations to the respondents in January and February did not yield any satisfactory response.

“The respondents seem to be acting negligently and in recent times omission on their part to take proactive measures had resulted in the incidents of communal violence in Indore, Mandsaur and Ujjian,” it noted.

The petition pointed out that the first incident was reported in Ujjain on December 25 when around 10 rallies, in which Bharatiya Janata Party Yuwa Morcha (BJYM) and other organisations took part, were held for collecting funds for the Ram Mandir.

Similar incidents were reported from Indore, Dhar and Mandsaur. In Mandsaur’s Dorana village, the members of the minority community in anticipation of violence had apprised the Mandsaur superintendent of police on December 28. “The minority population had to vacate the locality and run for their life as the locality was swarmed by a large gathering shouting communal slogans against the minority community, brandishing weapons, raiding a Masjid and vandalising a Minaret the next day on December 29, 2020.  The police and administration personnel were hardly 50-60 in number despite knowing the strength of the number of unruly communal mobs targeting minority communities,” the petition noted.

Also Read |VHP rally through a village in MP leaves empty homes, damage and fear in its wake

In Indore, a rally organised at Chandankhede village on December 29 led to similar incidents of violence. The petition stated, “Most of the members were carrying swords, sticks, firearms and other weapons underthe leadership of Ex-MLA Manoj Choudhary. This was happening in presence of police and administrative personnel. A demolition was made by the miscreants from the rally, damage was done to residential houses belonging to minority community, accompanied with incidents of dacoity and robbery. A large number of vehicles were burned. Unfortunately, the Government and police officials made the residents of minority locality leave the area but did little to stop the unruly rally. Members of minority community were attacked with the intention to lynch.”

According to the petition, a delegation of aggrieved persons from Indore, Ujjain and Mandsaur belonging to minority community had approached Digivijay Singh in Bhopal in the first week of January 2021. Singh subsequently submitted a representation to principal secretary (home) demanding an inquiry and had also written to the DGP of MP but no action was taken. After this another representation was made in February 2021 to Chief Secretary Iqbal Singh Bains, reiterating the directions of the Supreme Court into the incidents of communal violence at Ujjain, Mandsaur and Indore.

However, it was on March 1 that Singh finally received a reply from the principal secretary (home). Digvijaya in his petition to the high court stated, “The communication instead of answering the queries of the Petitioner herein regarding the compliance of the directions of Hon’ble Supreme Court in the incidents of communal violence at Ujjain, Mandsaur and Indore, in a cryptic manner enumerated number of criminal cases lodged and stage of the investigations.”

The petition approached the high court to ensure that the state complied with directions passed by the Supreme Court in the Tehseen Poonawala vs Union of India case (2018) and the Commissioner of Police and other vs Acharya Jagdishwarananada (2004) along with the Arumugam Servai vs state of Tamil Nadu case (2011).

Pune: PCMC gets major portion of land and encroachments after merger, PMRDA gets deposits and staff