In the last two days, Shah worked from his office in Parliament House complex, holding meetings with all those mattered on this issue. Having built a reputation for organisational prowess within the party, Union Home Minister and BJP chief Amit Shah on Monday pulled off a legislation – the Jammu and Kashmir Reorganisation Bill — in Rajya Sabha that is set to define his political career in national politics.

That Shah, a quintessential organisation man, chose not to address his scheduled session to party MPs during the two-day training session over the weekend, except his brief address at the inauguration, got BJP MPs curious about the coming move.

In the last two days, Shah worked from his office in Parliament House complex, holding meetings with all those mattered on this issue.

The flawless execution — keeping cards so close to his chest that most ministerial and party colleagues were left guessing — and taking the Opposition by surprise and forcing them to take a public position on this politically contentious issue is set to become Shah’s first signature stroke in national politics.

Read | Using Article 370 to scrap Article 370? The legal debate ahead

According to one party leader, it appears that only Prime Minister Narendra Modi and Shah were aware of the complete plan, and senior ministers were given information on “piecemeal basis”. Union Law and Justice Minister Ravi Shankar Prasad completed drafting of the Bill as late as Sunday night, sources said. 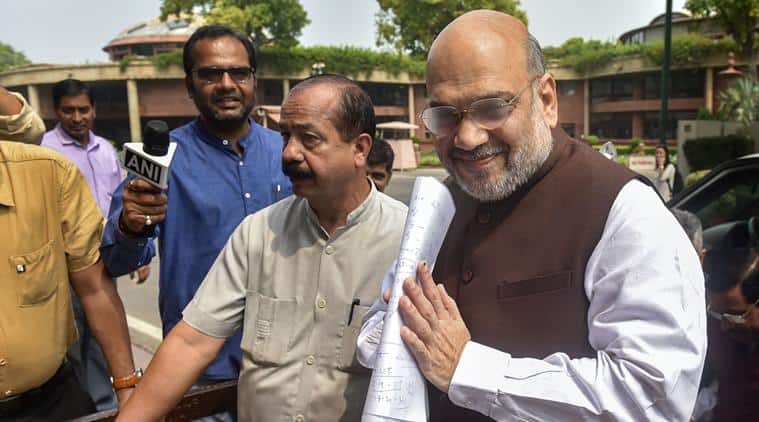 Other ministers, it is learnt, were informed only at the Cabinet meeting on Monday morning.

“As far as the question of (Article) 370 is concerned, you must know that it is mentioned as temporary in the Constitution, not permanent. This was done in agreement with Sheikh Abdullah,” Shah had told the Lok Sabha on June 28 during the debate on extending President’s Rule in the state.

Seen in this backdrop, sources in BJP said, Shah had by then begun scripting this move. The two-pronged approach involved the legal drafting and also working on arranging the numbers in Rajya Sabha. Resignations by some Opposition MPs, and a few joining the BJP, were part of that larger plan for numbers, they said.

According to a Union minister, Shah had told senior ministers and party leaders to organise majority in Rajya Sabha since there were “important and crucial Bills” to be passed in Parliament.

“The RTI and triple talaq Bills tested the waters,” the minister said. “We were emboldened by our success in getting those Bills passed in the Upper House even though we do not enjoy majority.”

As Home Minister, Shah brought urgency to the move. While the Modi government in its previous term played the healing touch approach envisaged by Mufti Mohammed Sayeed and deployed an interlocutor even while pursuing a muscular approach against stone-pelters, militants and financial channels for militancy, Shah began with a firm hands. That he did not wait for the next session of Parliament for making this move suggested a clear urgency brought to the issue.

“He dealt with it from a position of strength,” a senior BJP leader said. “Unlike his predecessors, he did not want to waste time holding peace talks with separatist leaders.”

Shah, with help from National Security Adviser Ajit Doval, ensured that heavy security deployment was in place in Kashmir Valley to contain possible violence following the announcement. While political leaders of all major parties were placed under house arrest on Sunday night, all modes of communication were snapped in the Valley to foil any attempt to mobilise people for protests.

“Every step in the Valley had the Shah touch – it was his mission, and he has succeeded in it,” the party leader said. 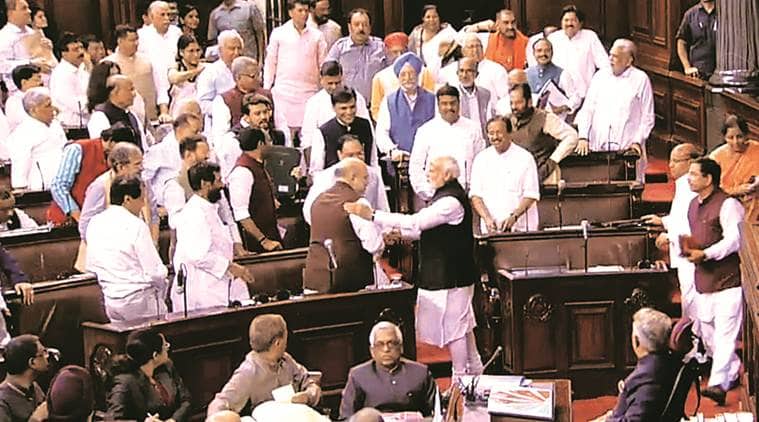 Lauding Shah’s move, Prime Minister Narendra Modi today tweeted, “Home Minister @AmitShah Ji’s speech in Rajya Sabha was extensive and insightful. It accurately highlighted the monumental injustices of the past and coherently presented our vision for the sisters and brothers of J&K,”

In one stroke, Shah has managed to strip Jammu and Kashmir of its special status and paved the way for delimitation of Assembly constituencies of the newly created Union Territory of J&K, where the party hopes to correct the skew in favour of Kashmir Valley and enhance electoral heft of Jammu region. With this move, more Hindus — including refugees from Pakistan and PoK — can not only purchase land and settle in the Valley but also get more Dalits and people belonging to weaker sections benefit, which the party hopes will reflect in the electoral results.

While former Prime Minister Atal Bihari Vajpayee and Shah’s predecessor in the MHA, Rajnath Singh, believed in extending a healing touch to the region to gain people’s faith, Shah always believed that removing special status is the only way to resolve the Kashmir crisis, a party leader said.

Click for our complete coverage on Jammu and Kashmir