Leader of the Opposition in the Lok Sabha, Mallikarjun Kharge Tuesday said that the Opposition would flag issues “agitating” the people including lynchings by cow vigilantes, unemployment, safety of women, misrule in J&K among others. Prime Minister Narendra Modi sought the cooperation of all political parties for the smooth functioning of Parliament and a productive session. (Express Photo by Tashi Tobgyal)

A day before the monsoon session of Parliament begins, the Congress announced Tuesday that 12 Opposition parties had decided to bring a motion of no-confidence in the Lok Sabha. Sources said that these notices were already on the way even as Speaker Sumitra Mahajan had not admitted such a notice in the last Parliament session.

As Prime Minister Narendra Modi sought the cooperation of all parties for a “productive monsoon session”, Leader of the Opposition in the Lok Sabha, Mallikarjun Kharge Tuesday said that the Opposition would flag issues “agitating” the people including lynchings by cow vigilantes, unemployment, failure of the Centre’s foreign policy, safety of women, misrule in J&K, dilution of the Atrocities Act by the Supreme Court and the dilution of reservations in autonomous institutions like IITs.

Kharge also said that the Opposition will raise the plight of farmers, price rise, “black money” parked abroad and the issue of granting special status to Andhra Pradesh. 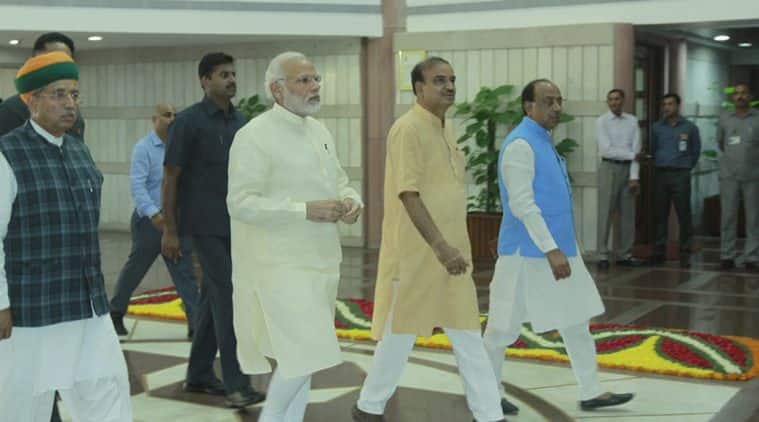 The 24-day session is scheduled to conclude on August 10 after 18 sittings. (Express Photo by Praveen Jain)

According to PTI in Amaravati, the TDP parliamentary party has decided to bring forward a motion of no-confidence against the government and will also disrupt proceedings if the motion is not taken up for discussion, the party said. The TDP has 16 members in the Lok Sabha.

Leader of the Opposition in the Rajya Sabha Ghulam Nabi Azad maintained that if Kharge gave a notice for a motion of no-confidence and at least 54 members supported it on the Chair’s call, the notice had to be admitted. This, he asserted, was a Constitutional obligation of the Chair.

Samajwadi Party leader Ram Gopal Yadav said at the all-party meeting: “We will not allow the House to function till an assurance is given by the government on the floor of the House on reservations to SCs and STs in higher education.”

The 24-day session is scheduled to conclude on August 10 after 18 sittings. As many as 46 bills, including six for the replacement of as many ordinances, have been lined up for the session.

Parliamentary Affairs minister Ananth Kumar told reporters after the meeting that the Prime Minister asked for the cooperation of all parties for a smooth conduct of proceedings.

He said: “The entire country expects and hopes Parliament will function and debate issues of national interest.” He added that the government attached importance to issues raised by all parties and called upon them to collectively strive to create a constructive atmosphere in the session to achieve national good.

Representatives of the AIADMK and the DMK on the one hand and leaders of the TDP and the YSR Congress exchanged heated arguments at the all-party meeting. V Vijaysai Reddy of the YSR Congress got agitated at the outset seeing the name-plate of a woman MP, who had defected from his party. The YSR Congress had already initiated proceedings to get her disqualified. The member concerned was not present.

This prompted CM Ramesh and YS Chowdhury to join the issue with him. The altercation soon shifted to the issue of granting Andhra Pradesh special status. Soon thereafter, EKS Elangovan took up the Tuticorin firing issue and said that the situation would not have taken an ugly turn if the government had not ignored the mass agitation for 100 days. He was challenged by A Navaneethakrishnan of the AIADMK, who almost shouted him down.