Mohan Bhagwat had to make one reference on the last day, Wednesday, when he was responding to a question on Golwalkar’s ‘Bunch of Thoughts where Muslims are called the shatru (enemy). Madhav Sadasiva Golwalkar (popularly known as Sri Guruji), the second and the longest-serving chief of the RSS credited with widening the RSS’s footprints in post-Independent India, did not find any mention among 32 personalities referred to by the RSS chief Mohan Bhagwat during the two days of his lecture series on the future of India.

The series was held to ostensibly explain the RSS and to allay what it called “misperceptions” regarding the organisation.

Bhagwat had to make one reference on the last day, Wednesday, when he was responding to a question on Golwalkar’s ‘Bunch of Thoughts where Muslims are called the shatru (enemy).

READ | RSS does not accept Article 370 and 35A of Constitution, says Mohan Bhagwat

His answer was telling — he said that quote wasn’t there in a new edition.

(As far as Bunch of Thoughts goes, every statement carries a context of time and circumstance…his enduring thoughts are in a popular edition in which we have removed all remarks that have a temporary context and retained those that will endure for ages. You won’t find the (Muslim-is-an-enemy) remark there.) The only other time Bhagwat referred to Golwalkar was in response to a question when he made a passing mention of a little-known incident from Golwalkar’s life endorsing an inter-caste marriage in 1942.

The omission of Golwalkar’s name was startling given that Bhagwat invoked 32 different personalities as many as 102 times in the first two days of his lectures to show how the Sangh incorporates the best of diverse sources. So RSS founder K B Hedgewar got the maximum number of mentions (45) and Bhagwat referred to political figures like Mahatma Gandhi, B R Ambedkar, Motilal Nehru, Jawaharlal Nehru, Rabindranath Tagore, Subhash Chandra Bose, Veer Savarkar, M N Roy, AMU founder Sir Syed Ahmed Khan and even little known Sangh figures Martand Rao Jog and Kishan Singh Rajput along with Buddha, Zarathustra, Ramakrishna Paramhans, Dayanand Saraswati, Vivekananda, Guru Nanak and Shivaji.

READ | If Muslims are unwanted, then there is no Hindutva: Bhagwat

For the Sangh, Golwalkar is considered its prime architect and is widely revered. He took over as RSS chief after the death of founder Hedgewar in 1940 and steered the RSS until 1973. During this period, he was arrested after the assassination of Mahatma Gandhi and he negotiated with the then Home Minister Sardar Vallabhbhai Patel in drafting the RSS constitution required for lifting the ban imposed against it.

Despite this ban soon after the Independence, Golwalkar expanding the RSS’s footprints across various sectors. He is behind the RSS’s unique approach of creating affiliate organisations reaching out to different sections of the society.

In fact, it was during his stint that organisations like the political organisation Bharatiya Jan Sangh (BJS that later morphed into the BJP), student wing (ABVP), trade union arm (BMS) and the Vishwa Hindu Parishad (VHP) among others came into being. These organisations are now the front-ranking Sangh organisations in their respective sectors. The RSS now boasts of over three dozen similar affiliates. 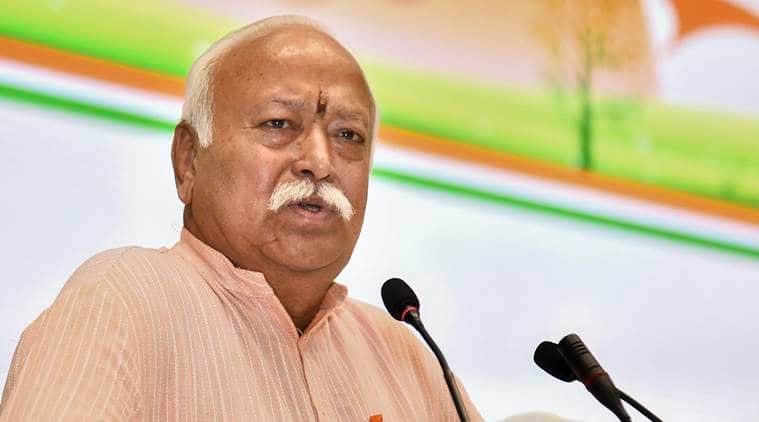 This omission of Golwalkar also holds significance given that he remains the most contentious Sangh figure who has always been invoked by the Sangh’s strongest critics to call out the RSS’s hard line on the Constitution and the position of Muslims in India.

This is evident in debate after debate in Parliament over the years.

“Fundamentalism is not only of the Islamic variety. Fundamentalism is also of the Hindu variety. When Guru Golwalkar in his wonderful “Bunch of Thoughts” talks that Muslims are aliens in this country, they are not people of this country…” said P Ramamurti, a Rajya Sabha member from Tamil Nadu in the wake of communal riots in Meerut in 1982.

“Even today I don’t think the RSS has given up that thing. At any rate, let there be an open repudiation. I am sure no person in this House who has got any connection with the RSS will dare repudiate Guru Golwalkar. If he dares to repudiate him, I bow to him,” Ramamurti had rubbed it in.

Similar barbs were hurled against BJP when Atal Bihari Vajpayee was Prime Minister.

“I want to read out to you what Mr. Golwalkar had said. He said, ‘in order to achieve the goal, the most important and effective step would be to bury for god’s sake all the elements of the federal structure of our Constitution. All autonomous and semi-autonomous States have to be abolished. We must declare one nation, one State, one Legislature and one Executive…In Hindustan exists and must need exist, the ancient Hindu nation and none else but the Hindu nation. All those not belonging to the national, this Hindu race, Hindu religion, culture and language, naturally, fall out of the pale of national life.’ Is this what you are defending?is how then Congress Rajya Sabha member Jayanthi Natrajan spoke in the House on December 18, 2001.

Though the omission of Golwalkar from RSS chief’s address is not exactly the “repudiation” that Ramamurti sought in 1982, Bhagwat’s prescription of an edited version of Golwalkar’s thoughts is possibly the first public signal of an RSS rethink on some of its contentious issues.

In fact, during his lectures, the RSS chief nuanced the Sangh position on the two issues most associated with Golwalkar. He said that the Constitution is the “consensus of the country.” And that “the day it is said that Muslims are unwanted here, the concept of Hindutva will cease to be.”

READ | Those who oppose us also ours… we are for yukt Bharat, not mukt: RSS chief

Student gangrape: How Dehradun school officials got together to ‘script a cover-up’