Bhagwat added that there have been "planned attempts" to increase the Muslim population in India, so that the community becomes a dominant force and the nation slowly turns into Pakistan. 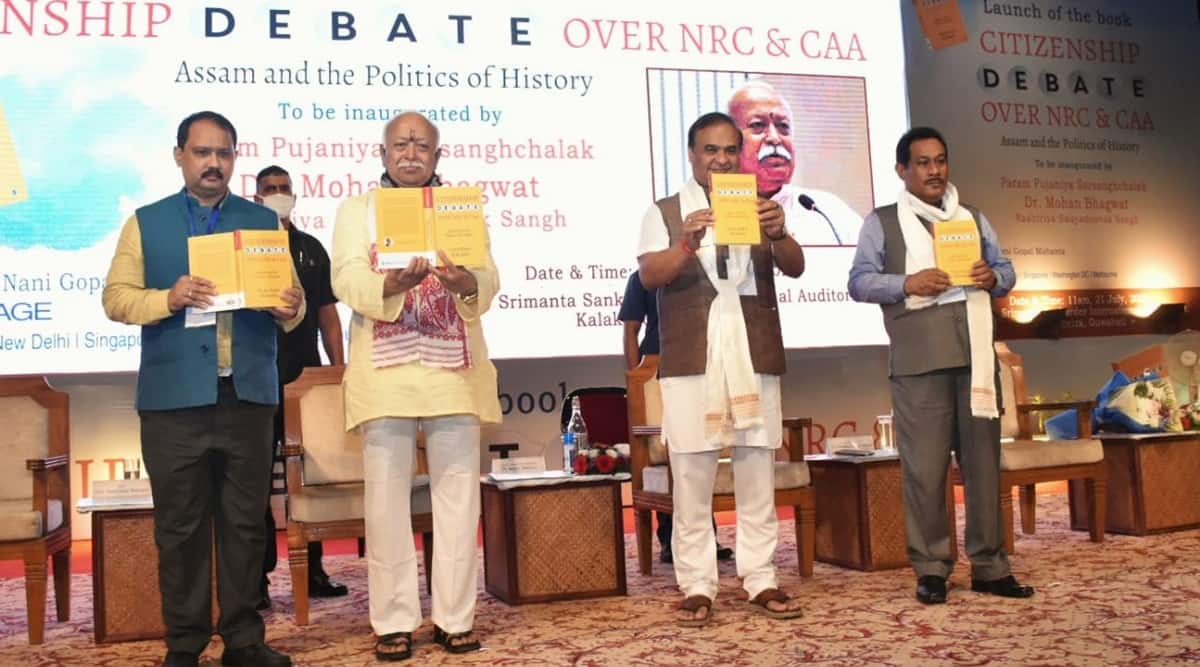 RSS chief Mohan Bhagawat along with Assam CM Himanta Biswa Sarma at the release of the book ‘Citizenship Debate Over NRC and CAA, Assam and Politics of History’ in Guwahati.

Speaking at the launch of the book ‘Citizenship Debate Over NRC and CAA, Assam and Politics of History’ by Gauhati University professor Nanigopal Mahanta in Guwahati, Bhagwat said the CAA-NRC was “not against any citizen of India.”

According to the RSS chief, a certain section of people had lent a communal colour to the issue to derive political mileage out of it. “It’s become a Hindu-Muslim issue when it’s not even one,” he said.

Bhagwat said the NRC was a way to determine genuine citizens residing in India. “Such exercises are followed in many countries across the world. What to do with them (those who are left out) is another matter, but at least let us first find out who the citizens in the country are,” he said.

The CAA was passed in December 2019 to speed up granting of Indian citizenship to non-Muslim migrants from Bangladesh, Pakistan and Afghanistan. Fearing a fresh wave of migration because of the law, Assam saw a wave of violent protests, which led to five deaths in December 2019.

The Assamese also argue that the CAA violates the Assam Accord of 1985, which set the cut-off date for citizenship in Assam as March 24, 1971. Based on that date, the final NRC to determine genuine Indian citizens in Assam was published in August 2019. It left out 19 lakh people out of 3.3 crore applicants.

Bhagwat said that the [1950] Nehru-Liaquat Pact stated that our country would protect its minorities. “We have continued to follow it till today, while Pakistan failed to do so.”

Bhagwat added that there have been “planned attempts” to increase the Muslim population in India, so that the community becomes a dominant force and the nation slowly turns into Pakistan. “This happened in Punjab, Sindh, Assam, and Bengal. The plan somewhat worked as the Partition happened. But not entirely since Assam got saved because it did not go to Pakistan, even though part of Bengal and Punjab got divided,” he said.

He said that many people came from these countries escaping persecution and seeking refuge and it was India’s responsibility to protect them.

“Respect for religions, cultures, and languages are part of India’s culture and tradition for 5,000 years. We do not have to learn about these ideals from other countries – It is rooted in our tradition,” he said.

Also present at the book launch was Assam Chief Minister Himanta Biswa Sarma, who said that he would “always remain a supporter of the CAA.” “We have a historical duty towards the displaced people who have been persecuted. At the same time, we will address identity issues faced by the Assamese people and ensure ways to protect our Assamese identity and culture. The Assamese people will find a way out to balance everything,” he said.

He said that his government had “no problem in talking to people who have genuine concerns about the CAA.”

“Assam’s intellectual society is still dominated by the left and left liberals. When I say left, they are more left than Karl Marx himself,” he said, adding: “The people who are agitating against the CAA from a national perspective are very communal. They say why not allow Muslims also…but in Assam, our debate is different… you do not allow Muslim migrants, neither you allow Hindu migrants.”

Sarma said that the “left liberals wanted to divide Assam along linguistic lines.”

“During the CAA agitation, there was a lot of misinformation, that there are hoards of people who are waiting to be settled in tea gardens. That was bereft of any logic. When there is lack of logic, the leftists take the refuge of misinformation. I think during the last elections, the way communal poison was spewed to engulf Assam in violent flames…after that there is no need to explain why CAA is necessary,” he said.