The committee will be headed by Secretary (Security) in the Cabinet Secretariat Sudhir Kumar Saxena, and will have Intelligence Bureau Joint Director Balbir Singh and SPG IG S Suresh as members. The Prime Minister's convoy was held up in Punjab's Ferozepur district on Wednesday. (PTI)

A day after Prime Minister Narendra Modi’s cavalcade was stranded on a flyover in Punjab, the Ministry of Home Affairs (MHA) has constituted a committee to probe the security lapse.

The committee will be headed by Secretary (Security) in the Cabinet Secretariat Sudhir Kumar Saxena, and will have Intelligence Bureau Joint Director Balbir Singh and SPG IG S Suresh as members.

The Special Protection Group (SPG), which is responsible for the PM’s security, functions under the control of the Cabinet Secretariat.

“Ministry of Home Affairs(MHA) has constituted a committee to enquire into the serious lapses in the security arrangements during Hon’ble Prime Minister Shri Narendra Modi’s visit to Ferozepur, Punjab on 05.01.2022, which led to the exposure of the VVIP to grave security risk,” the MHA said in a statement, adding that the committee has been advised to submit the report at the earliest.

Subscriber Only Stories
View All
Delhi Confidential: Pro-public on Republic Day
Meet the woman who found name missing from voter list in UP — and took th...
At DGP meet, officers flag Islamist, Hindutva outfits in radicalisation
Lessons from Covid: Jharkhand’s first survey of migrants
Apply New Year promo code SD25
Explained |How is the PM’s security planned, and what went wrong in Punjab?

PM Modi’s cavalcade was stranded on a flyover 30 km from National Martyrs Memorial in Hussainiwala on Wednesday, after protesters blocked the road ahead. Calling it “a major lapse in the security of the PM”, the MHA had Wednesday sought a report from the Punjab government, and asked the state “to fix responsibility for this lapse and take strict action”.

Sources said the committee will go through the Advance Security Liaison report prepared before the PM’s visit and see if protocol was violated during the visit. 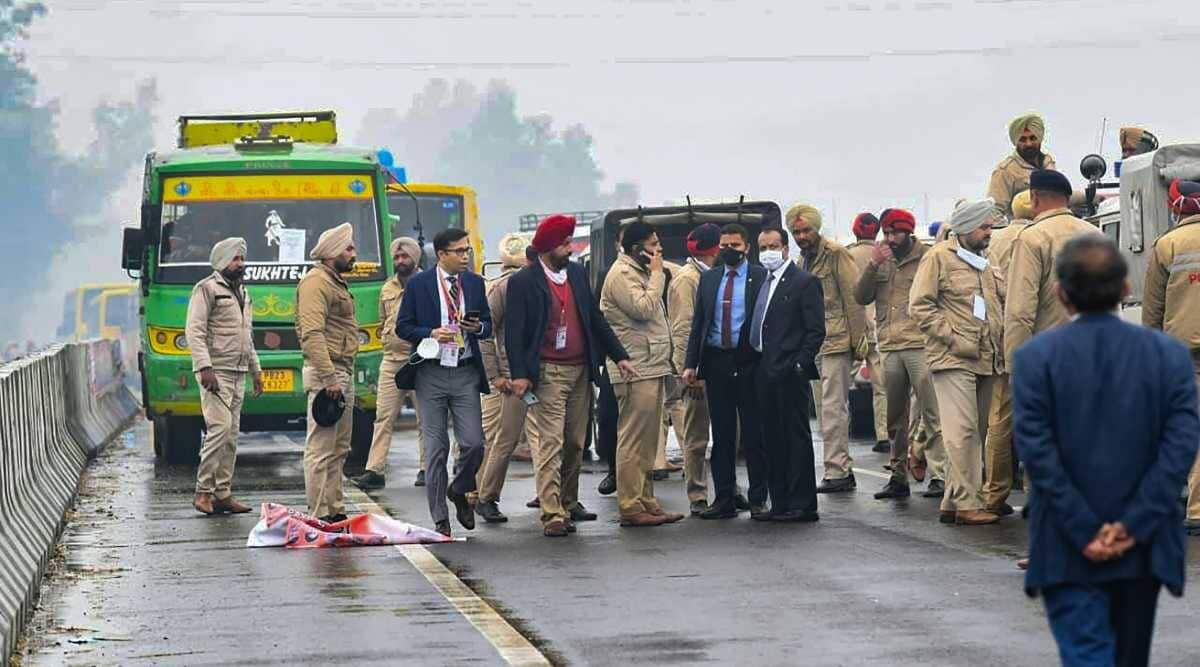 Police personnel and officials at the flyover where Prime Minister Narendra Modi’s convoy was stuck due to a blockade by a group of protestors, in Ferozepur, Wednesday, Jan. 5, 2022. (PTI)

Planning of PM’s security during any visit is an elaborate exercise that involves both central agencies and state police forces. Three days before any planned visit, the SPG holds a comprehensive consultation with all stakeholders. This meeting is called Advance Security Liaison (ASL), a mandatory protocol for all PM visits.

The meeting is attended by SPG officials, Intelligence Bureau officials in the state concerned, state police officers, and the district magistrate concerned, among others. Every minute detail of the visit and required security arrangements are discussed. Once the meeting is over, an ASL report is prepared, which is signed by all those who attend the meeting. Based on this report, all security arrangements are made.

“What happened on Wednesday in Punjab is a violation of the SPG Act as the state government failed to follow all protocols set by the SPG for the PM’s movement,” a source in the government said.

Section 14 of the SPG Act makes the state government responsible for providing all assistance to the SPG during PM’s movement.

The provisions titled “Assistance to Group” states: “It shall be the duty of every Ministry and Department of the Central Government or the State Government or the Union territory Administration, every Indian Mission, every local or other authority or every civil or military authority to act in aid of the Director or any member of the Group whenever called upon to do so in furtherance of the duties and responsibilities assigned to such Director or member.”