Union Minister Ravi Shankar Prasad said the BSP chief has not denied the deposits made in the party’s account. 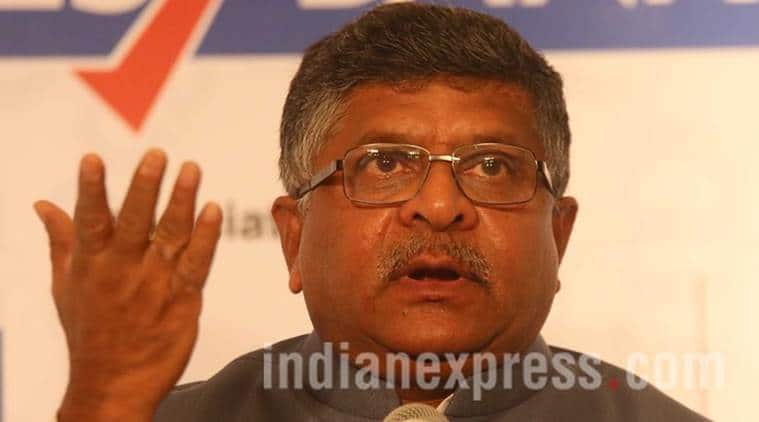 COUNTERING BSP chief Mayawati’s attack on Prime Minister Narendra Modi, the BJP on Tuesday alleged that the former Uttar Pradesh chief minister is using her Dalit identity to hide corruption. The party said development of Dalits should not be mortgaged to the corruption of one party and its leader. Reacting to reports that the Enforcement Directorate had found that the BSP had deposited approximately Rs 104 crore in scrapped currencies since legal tender of Rs 500 and Rs 1,000 was withdrawn on November 8, Mayawati on Tuesday alleged that the BJP was misusing official machinery to tarnish her image. She also called both Modi and BJP president Amit Shah “anti-Dalit”.

Addressing the media at the party headquarters later, Union minister Ravi Shankar Prasad said, “Her allegations are baseless and we reject them with the contempt they deserve. If the Enforcement Directorate does a routine exercise, why is she so rattled? Will your corruption be hidden in the name of Dalits? Does Mayawati want to say that her corruption should be seen as a fight against Dalits? It is an insult to Dalits.”

Prasad said the BSP chief has not denied the deposits made in the party’s account, and asked, “It raises a bigger question: is it donation or a money-conversion exercise?”

He said, “Development of Dalits cannot be mortgaged to the corruption of one party or a leader.”

The minister also scoffed at Mayawati’s claim that Rs 104 crore found in BSP’s bank account in Delhi had come by way of political donations, and that those were converted into high-denomination notes before being deposited in the days since November 8. “Small currencies were converted into bigger bills and the money was not deposited in August, September and October, but soon after demonetisation. It raises a lot of suspicion,” Prasad said.

It is now clear why the BSP leader was so fiercely opposed to demonetisation so strongly, he added.

Prasad also dismissed Mayawati’s claim that the BJP, Congress and the Samajwadi Party had a tacit understanding for the upcoming Assembly elections in UP and that the BJP was pushing SP and Congress have a formal alliance. He said the BJP will emerge victorious in the election on its own. “This is nothing but her frustration. She made these comments only yesterday while deposits were made much earlier… As far as the BJP is concerned, even if SP, BSP and Congress come together, it will emerge victorious,” he said.

Slamming Mayawati, Union Minister Ram Vilas Paswan too said her Dalit origin does not give her a “licence” to indulge in corruption and she should let the law take its own course.

Paswan, a prominent Dalit face of the ruling BJP-led NDA, hit out at the former UP chief minster over alleged deposits of Rs 104 crore in BSP’s bank account following the note ban and said it was shocking that a party claiming to represent the most downtrodden sections of society has so much money.

“My party, LJP, works for Dalits. We have six Lok Sabha members and the total money in LJP’s bank account is Rs 1,03,198. Being a daughter of a Dalit does not give you licence to indulge in corruption. She must let the law take its course and let authorities probe her party’s account,” he told mediapersons.

Mocking Mayawati’s strident opposition to demonetisation since it was announced on November 8, the LJP president said that it has now become clear “why likes of her and RJD chief Lalu Prasad” have been its most vocal critics. “They were hit the hardest. That is why they are making so much of noise,” he claimed.

Referring to deposits of Rs 1.43 crore in bank accounts of Mayawati’s brother, Paswan said she must come clean on the source of the money.

“Who is he? What is his source of income? Why is she afraid? She should let agencies probe all accounts and deposits,” he said. The disclosure of deposits in BSP’s bank account is not the end but only the first chapter and more details will come out soon, he added.