According to sources, local TMC leaders including MLA Arjun Singh and Bhatpara Municipality Chairman-in-Council Md Maqsood Alam participated in the rally, which began around 4 pm. The people were carrying swords and trishuls, said residents of the area. 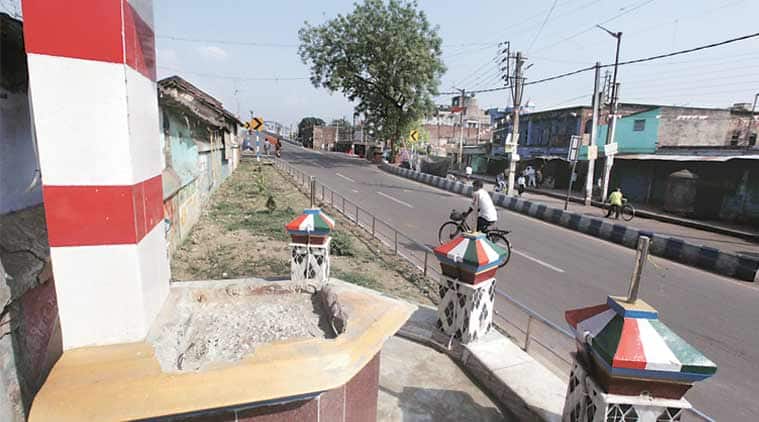 The spot where the statue stood. (Express Photo: Subham Dutta)

WHILE THE deaths of two persons in clashes triggered by Ram Navami processions organised by the BJP and Sangh Parivar outfits in the state have been reported, another man was killed and a statue of Maulana Abul Kalam Azad pulled down during an armed rally led by Trinamool Congress (TMC) leaders in North 24 Parganas district on Sunday. The incident occurred in Bhatpara municipality area, about 40 km from Kolkata.

According to sources, local TMC leaders, including MLA Arjun Singh and Bhatpara Municipality Chairman-in-Council Md Maqsood Alam, participated in the rally, which began around 4 pm. People were carrying swords and trishuls, said residents of the area. But Alam claimed that their procession was “hijacked by people with the wrong intentions”, who “were raising pro-BJP slogans”.

“We had clear instructions to take out a procession without arms. It was a huge crowd, people kept joining us. Who came with what arms is a matter of police investigation. If someone wants to join with a sword in hand, how can we throw him out? After all, it is a matter of belief. We tried our best to control the crowd,” he said.

Meanwhile, asked about the Ram Navami processions, Chief Minister Mamata Banerjee said in New Delhi: “There were two-four processions, but the media plays it up to seem that there were many more. Even the Ganesh Puja did not happen earlier. What is this ploy to defame Ram by carrying pistols in his name, threatening other communities? This is against the Constitution.”

An eyewitness said the trouble in Bhatpara began when the crowd was passing by Jama Masjid in Ghosh Para (a Muslim-dominated area).  “A group of people said something, which the Muslim community objected to. There was an argument between the two groups, followed by stone-pelting. It was a long procession, and half the people were already near the Kankinara rail bridge, which was recently renamed after Maulana Abul Kalam Azad. When these people heard about the incident near the Jama Masjid, they pulled down the statue of Maulana Azad. The mob also targeted vehicles parked in the area,” said the eyewitness.

According to residents, the statue, at one end of the Kankinara rail bridge, was inaugurated on January 26 this year. All that is left now is an empty platform. However, local TMC MLA Arjun Singh claimed that the statue was never there. “The statue had not been constructed yet. Rumours are being spread and people are taking advantage of the situation,” he said.

“The mob first attacked the statue with a sword and then pulled it down. The statue was installed recently, after the new bridge was inaugurated by local TMC leaders,” said Anwara Khatoon, a resident. While purported video clips of the statue being pulled down are being circulated on social media, police refused to comment on the issue. “The statue is not a big thing. Our focus should be human lives. Statues can be reconstructed,” said a police official who did not want to be named.

Even as the police were trying to control the situation in Kankinara, one person, Maqsood Khan (30), was reportedly shot in Katapukur, near the Jama Masjid. “My husband heard about the tension in the area and went out to bring back our six-year-old daughter, who had gone out to buy a chocolate. He didn’t come back. Somebody fired at him and he collapsed on the road. Some people rushed him to the police station, and then to hospital, where the doctors declared him dead,” said Khan’s wife, Gulabsa Begum. “There was firing and Maqsood was hit by a bullet on his chest. I had a narrow escape, with a bullet injury on my leg,” said Ashraf Ali, a resident of the area.

Asked if there was firing, a senior police official said, “Bullets were fired but anti-socials were involved. We have to check if the firing was linked to the Ram Navami procession.”

Asked about the death, Deputy Commissioner of Police, Barrackpore, Dhrubjyoti Dey said: “It’s being investigated… We first want to maintain peace in the area, and then probe details of the incident and the reason behind it. We have received a complaint, the relatives of the deceased have named a few people. We are investigating.”

“Kankinara has always been a sensitive area, police should have been prepared… It’s a failure of the police and administration. There were two-three processions, which resulted in clashes, these should be probed,” said state BJP president Dilip Ghosh.

“The TMC took out Ram Navami processions at various places, where people were carrying arms. Mamata Banerjee should take action against them. Swords have always been a part of Ram Navami celebrations. This has all been created by TMC to scare people in the name of Ram,” said BJP national secretary Rahul Sinha.