Maharashtra Bandh LIVE updates: The pro-reservation groups today tried staging a "peaceful" strike in the state, however, several incidents of violence were reported. At least three buses were put on fire and nine others were deflated.

Agitators move away from the highway, makes way for traffic. (Express Photo by Amit Chakravarty)

The Maratha Kranti Morcha on Wednesday called off its state-wide bandh after an intensified protest for almost two days, demanding reservation in jobs and education on Wednesday.  The pro-reservation groups today tried staging a “peaceful” strike in the state, however, several incidents of violence were reported. At least three buses were put on fire and nine others were deflated.  Essential services like hospitals, school, medical were exempted from the Bandh. Chief Minister Devendra Fadnavis had on Tuesday called for an emergency high-level meeting to review the “progress” made by the Maharashtra State Backward Class Commission on the issue.

The Maratha leaders want the government to give them OBC status and not reservation because any quota, beyond the existing 50 per cent, would be difficult to implement. On the other hand, if the Marathas are granted OBC status, they would qualify for the existing OBC quotas.

Read |  Why Maratha community is on the warpath again

The protesters have now vowed to gherao ‘Varsha’, the official residence of the chief minister in Mumbai, press for his resignation and seek finality to their demands.

In a scheduled recruitment to 72,000 government jobs, Fadnavis had promised that the government would keep 16 per cent positions reserved for the Marathas.  “There would be no injustice meted out to the Maratha community.”

The Maratha community has intensified their protest demanding reservation in jobs and education. Follow LIVE UPDATES.

#WATCH: Protesters torched tires in Nagpur over their demand of reservation for Maratha community in government jobs & education. #Maharashtra pic.twitter.com/wegx81dmoV 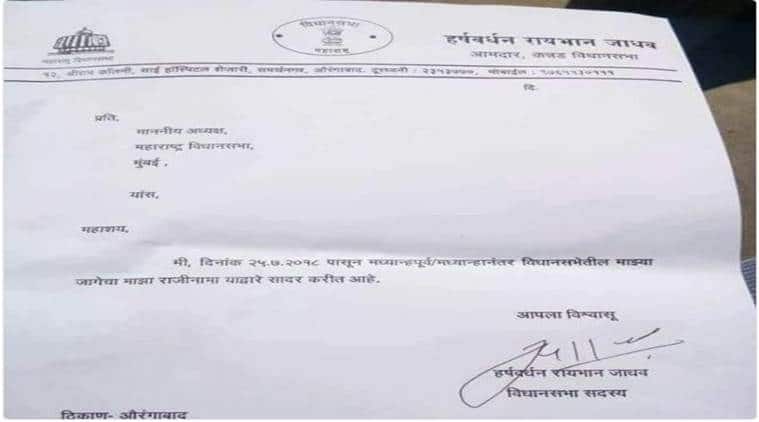 Congress leader and former Maharashtra CM Ashok Chavan commenting on the ongoing quota stir was quoted by ANI as saying, "There's no question of us taking political benefit.Till when you'll deceive people in name of discussions? BJP and Shiv Sena are taking political benefits by asking people to vote in their favour and then they will help."

According to news agency ANI, the train services between Thane and Vashi on Trans-Harbour line, which were stalled due to protest over ongoing quota demand, d after the Maratha body called off their protest.

After ongoing quota stir turned violent in Maharashtra, state PWD Minister Chandrakant Patil apologised to the Maratha bodies over his remarks, claiming that his statements were 'twisted'.

Speaking with reporters, the minister was quoted by PTI as saying: "I am requesting (the protesters) with folded hands to stop the ongoing violence. Maharashtra has a tradition of resolving problems amicably."

The minister added, "I had stated that 58 rallies had been conducted (by the Marathas for their demands) in a peaceful manner. Everybody had hailed these peaceful rallies and even the state government had also acknowledged the same. This peaceful agitation should not be maligned due to ongoing protests."

Three policemen, including Satara's Superintendent of Police Sandeep Patil, were injured while police was trying to the curb the violent protesters at Kalamboli in Navi Mumbai. A police official said the protesters threw stones at policemen and also tried blocking the Mumbai-Goa and Mumbai-Pune highways.

We wanted to prove that we are together and proved it: Maratha Kranti Morcha leader

Virendra Pawar, the leader of the Maratha Kranti Morcha, was quoted by PTI as saying, "We only wanted to prove that we are together and proved it. We never wanted protests to get violent and therefore, we are calling off our bandh in Mumbai for today." He added, "We suspect some people carried out violent activities with political motives. Otherwise, it was supposed to be peaceful like before. But considering the reports of violence coming from outside Mumbai, we decided to call it off." 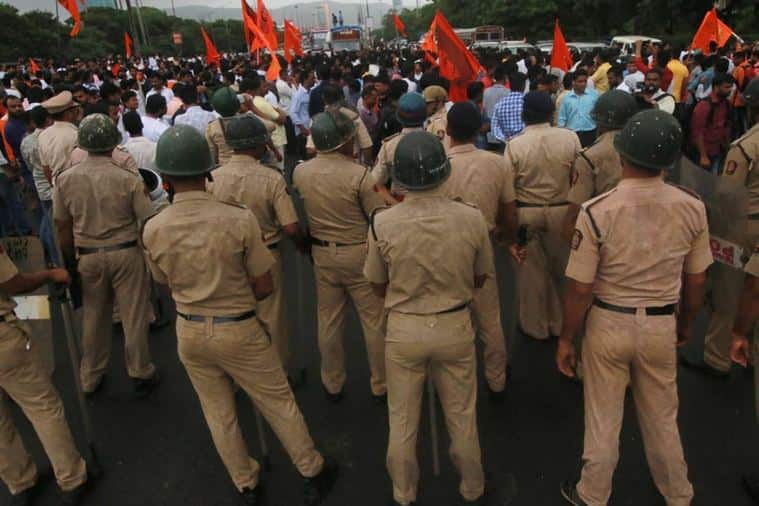 Vehicles burnt by protestors in Kalamboli on Sion Panvel Highway 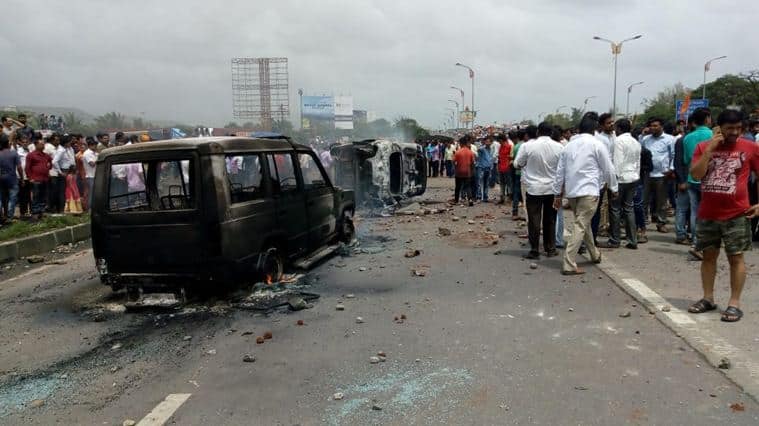 Even after appealing for a peaceful strike, protestors across the state have turned violent. Vehicles have been burnt, buses have been vandalised. I support #MarathaReservation demand. I appeal protesters to protest peacefully. We need to make a law in parliament and raise reservation cap from 50% to 75%, will also raise this issue in NDA: Union Minister & Republican Party of India leader Ramdas Athawale pic.twitter.com/rPBt5JRgwW

For the last four-five days, Maharashtra is witnessing sporadic incidents of violence 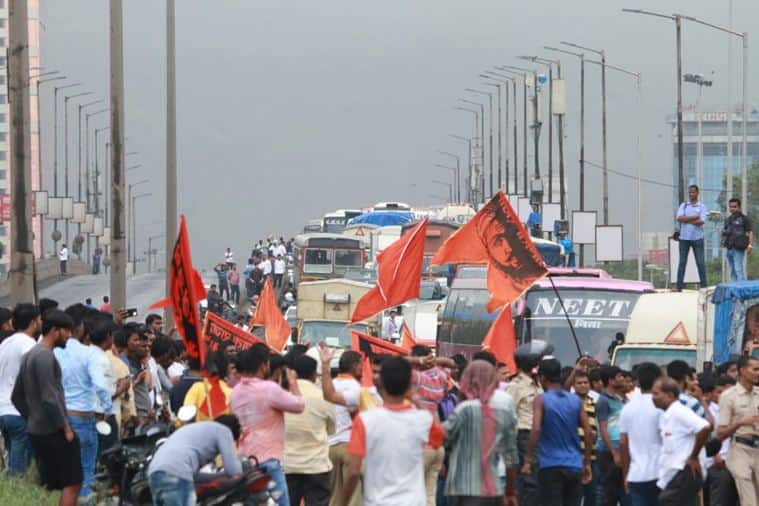 Two years after the Maratha community took to streets across Maharashtra holding silent marches and demanding quota in jobs, the community, which forms 33 per cent of the state’s population, has now turned aggressive. For the last four-five days, Maharashtra is witnessing sporadic incidents of violence like torching of buses, tyres and rasta rokos mainly in Marathwada, western Maharashtra and Konkan regions. The pro-reservation community continued with the bandh today and appealed the people to conduct a "peaceful bandh"

Pro-reservation groups have exempted schools, hospitals, medical and other essential services from Bandh 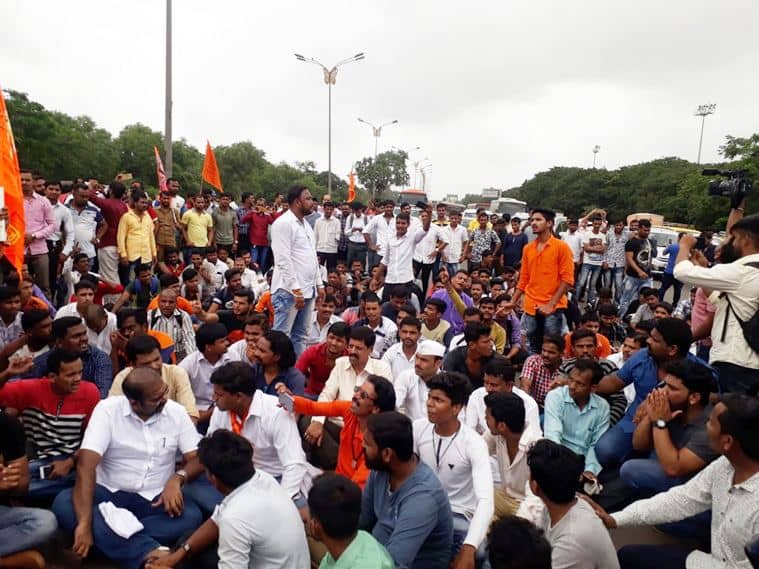 Security has been deployed at various places to avoid any untoward incident. The pro-reservation groups have exempted schools, hospitals, medical and other essential services, including vegetables from the bandh. No school buses were attacked or stopped in any area. Ambulance services were also running normal, a senior official of the public health department said. The Shiv Sena has been supporting the Maratha community's demand for reservation but decided not to participate in the protest. (Express Photo by Amit Chakravarty)

After markets and shops, Protestors are now shutting down petrol pumps

Trying to observe a " peaceful" protest, Protestors are now shutting down petrol pumps, they have also urged the Thane depot manager not to ply buses today. 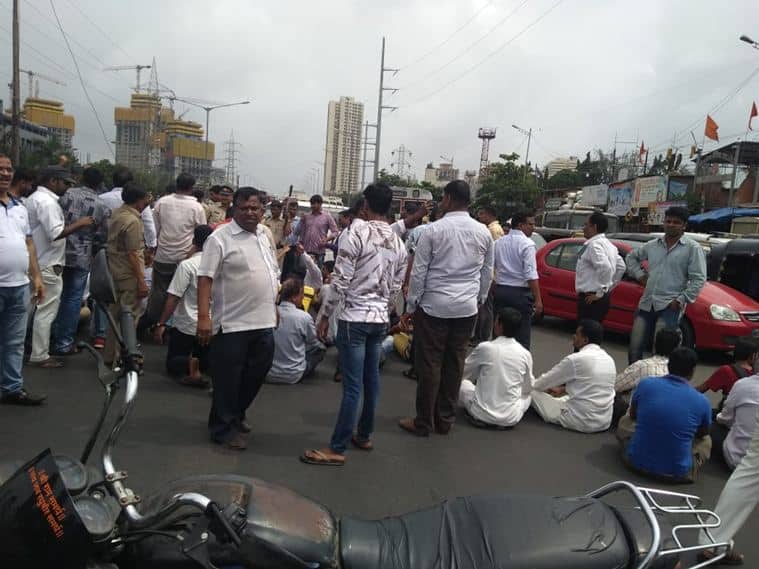 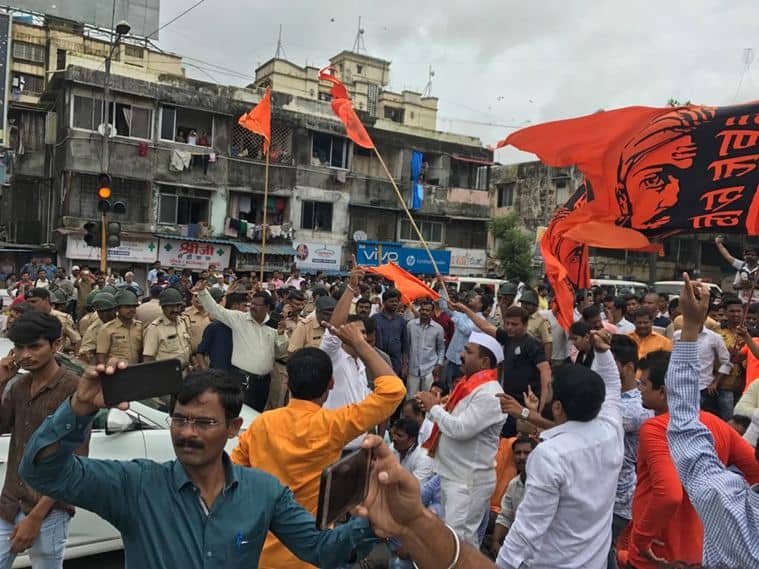 Agitators have started gathering at various locations in the Mumbai region and the neighbouring Raigad and Palghar districts. At some places, protesters raised slogans against Maharashtra Chief Minister Devendra Fadnavis and Public Works Department Minister Chandrakant Patil for allegedly insulting sentiments of the Maratha community. They attacked public buses in Mumbai, and the neighbouring Thane and Navi Mumbai. Roads were including the key Teen Hath Naka junction, resulting in long queues of vehicles on the road leading to Mumbai. 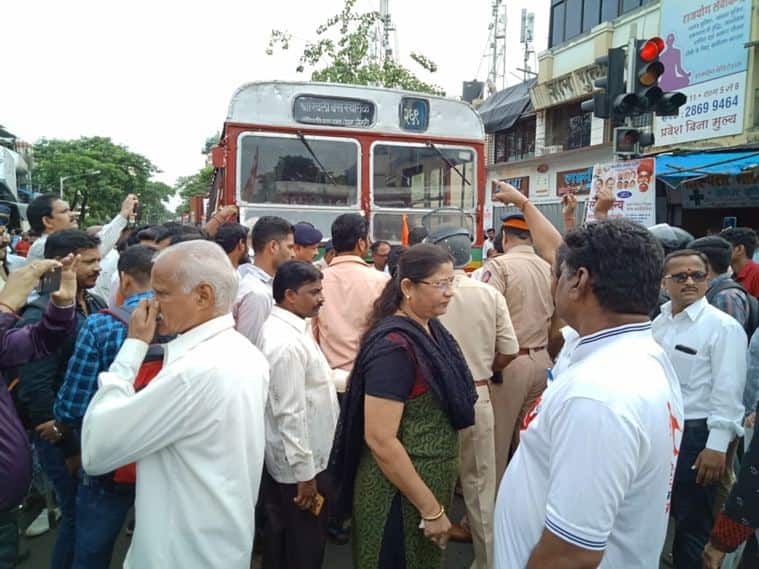 Protesters are not allowing buses to ply outside Thane depot.  They are also trying to block vehicular movement at western express highway (Express Photo) 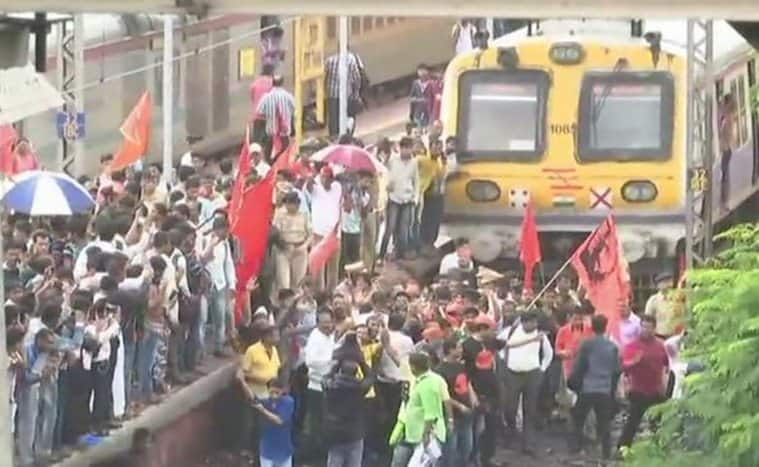 Maratha Kranti Morcha workers block a train in Thane. Trans-harbour between Thane-Vashi-Panvel has been suspended for now. (Source ANI)

Jagannath Sonawane (45) who had attempted suicide after consuming poison on Tuesday, died today in a hospital in Aurangabad.  At least nine BEST buses have damaged in parts of Navi Mumbai, Andheri and Kandivali till now.

Maharashtra on Tuesday observed a state-wide bandh being observed by Maratha outfits, a day after the death of a Maratha youth in Aurangabad. The man identified as 27-year-old, Kakasaheb Shinde jumped into a river to commit suicide. The Marathi Kranti Morcha will continue agitation until state Chief Minister Devendra Fadnavis issues an apology to the community.