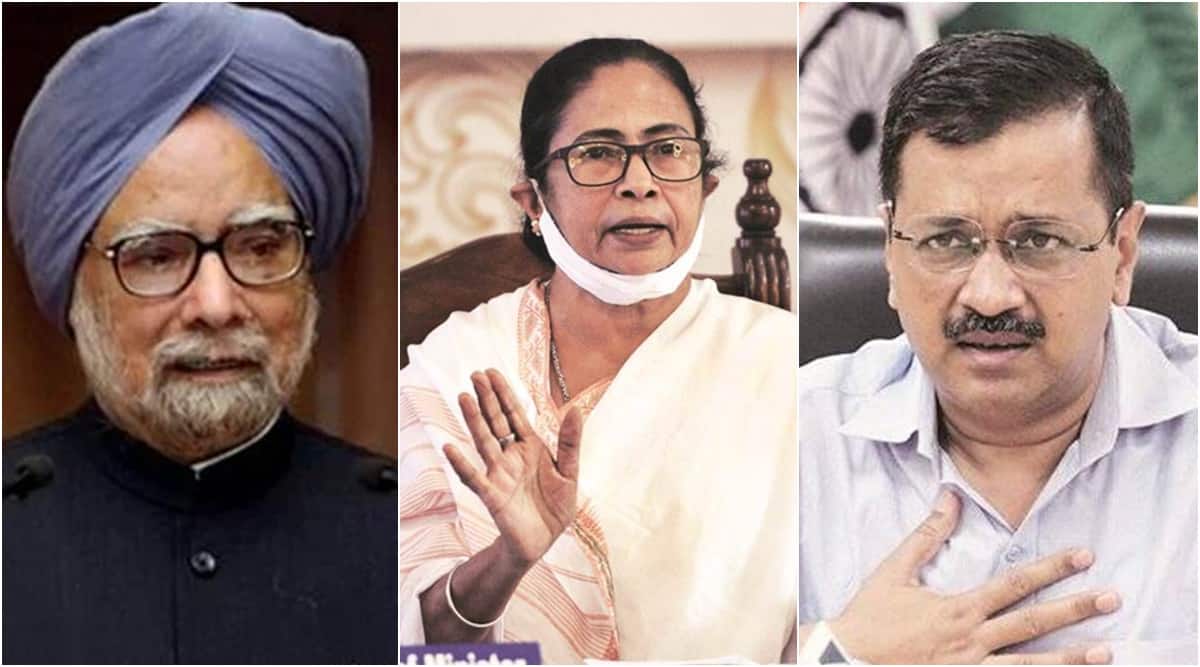 Manmohan Singh, Mamata Banerjee and Arvind Kejriwal are among the Opposition leaders who have written to PM Narendra Modi expressing concern about the Covid surge. (File photo)

With the Covid-19 surge showing no signs of abating, several opposition leaders, including former prime minister Manmohan Singh, have written to Prime Minister Narendra Modi, expressing concern about the current situation and highlighting the need to ramp up the vaccination drive.

Aside from Singh, Delhi Chief Minister Arvind Kejriwal, West Bengal CM Mamata Banerjee and DMK chief MK Stalin were the other leaders who dIspatched letters to the Prime Minister on Sunday.

Earlier, senior Congress leader Rahul Gandhi had written to PM Modi requesting him to open up “vaccination for everyone who needs it” while Maharashtra CM Uddhav Thackeray had requested him to “press in” the National Disaster Management Authority (NDMA) and make use of all options, including the airlift of medical oxygen, for rapid movement.

Singh, in his letter to Modi, stated that the orders for doses of coronavirus vaccine placed by the government should be made public and asked him to indicate how the vaccines will be distributed across states based on a transparent formula.

Singh suggested that any vaccine that has been cleared for use by credible authorities, such as the European Medical Agency or the USFDA, should be allowed to be imported without insisting on domestic bridging trials. “The relaxation could be for a limited period during which the bridging trials could be completed in India. All consumers of such vaccines could be duly cautioned that these vaccines are being allowed for use based on the approval granted by the relevant authority abroad,” he wrote.

Terming the Covid situation in the national capital as “very serious”, Delhi CM Kejriwal wrote to PM Modi seeking help for beds and oxygen for coronavirus patients. Kejriwal also requested Modi for reserving at least 7000 central government hospital beds out of the 10000 in Delhi for COVID patients, and an immediate supply of oxygen.

“The COVID situation has become very serious in Delhi. There is a huge shortage of beds and oxygen. I request that at least 7,000 out of 10,000 beds in Central government hospitals in Delhi be reserved for COVID patients and oxygen be immediately provided in Delhi. We are making all efforts at our level. Your help is needed,” he added.

Advertisement
A health worker collects a sample for testing from a person at Delhi’s Anand Vihar. (Express photo by Amit Mehra)
Also Read |Rahul Gandhi suspends his Bengal campaign, urges others to ‘think about consequences of holding large rallies’

Bengal CM Mamata Banerjee, in her letter to PM Modi, sought the Centre’s permission to “purchase vaccination doses directly with state funds and launch a massive free vaccination campaign in the state covering the entire population”.

In view of the rapid increase in the number of people getting infected, ‘universal vaccination’ is the need of the hour to protect lives, the DMK chief said, and appealed to him to ‘take a policy decision swiftly’ over it.

Tamil Nadu would need more vaccine doses than allotted now to accomplish effective vaccinations, break the cycle of infection and flatten the curve, he further said.

Earlier on April 13, Maharashtra CM Uddhav urged PM Modi to “press in” the National Disaster Management Authority and also to grant compulsory licenses to units exporting remdesivir to produce and sell them in the domestic market. “The biggest concern is Liquid Medical Oxygen (LMO) supply. The requirement of medical oxygen in the state is crossing the total capacity of 1,200 MT of LMO manufacturing. We have projected the demand will be close to 2,000 MT per day by April-end,” he wrote.

In another letter, Thackeray requested the Prime Minister to take various measures to provide relief to the people affected by the pandemic.

Rahul Gandhi had also written to PM Modi, asking him to place an immediate moratorium on the export of vaccines, fast track approval of other vaccines and open up vaccination to everyone who needs it. Criticising the PM, Gandhi asked whether the export of vaccines was an effort to garner “publicity” at the cost of India’s citizens.

“India had the first-mover advantage in vaccination and yet we are moving at a snail’s pace. Historically, India has achieved abundant experience in designing and executing some of the world’s biggest vaccination programs. Yet in the present case, we have managed to fully vaccinate less than 1% of the population in 3 months,” his letter read.

At the current rate of inoculation, it would take years to inoculate 75% of the population, Rahul said. “This will have catastrophic effects and will gravely decelerate India’s economy,” he added

He further said, “Our vaccination programme has to move beyond an individual’s picture on the vaccine certificate, towards guaranteeing maximum vaccination.”

The daily coronavirus positivity rate in India in the last 12 days has doubled to 16.69 per cent, while the weekly positivity rate has increased to 13.54 per cent in the past one month, the Health Ministry said on Sunday. India reported a record 2,61,500 new coronavirus cases and 1,501 deaths on Sunday, while active cases have surpassed the 18-lakh mark, the ministry data stated.

Kejriwal writes to Piyush Goyal over oxygen diversion and availability