Emotional moment for me… son of labourer takes over as Congress chief: Mallikarjun Kharge

Speaking about the upcoming elections in Himachal Pradesh and Gujarat, Mallikarjun Kharge said that people want change in these states. "We will have to show our party's strength in these elections... We are the soldiers of Mahatma Gandhi, we are not scared of anyone." 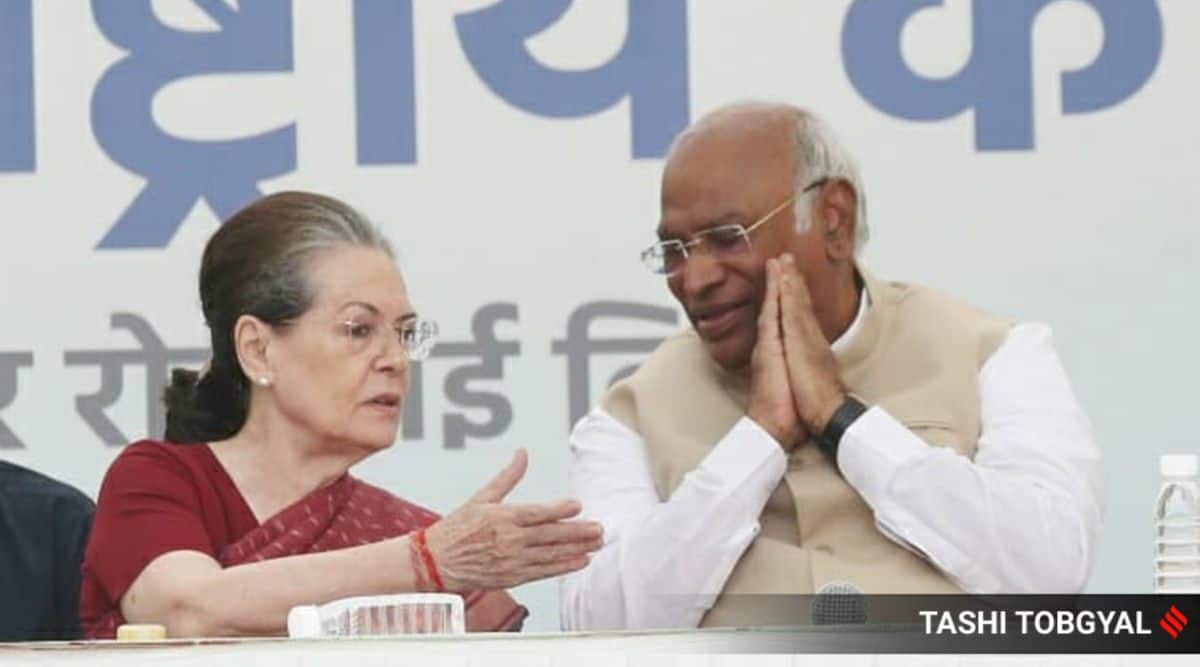 Mallikarjun Kharge's election is interpreted by some as part of the Congress's political strategy to regain its Dalit base. (Express File Photo)

Mallikarjun Kharge Wednesday took charge as the first non-Gandhi president of the Indian National Congress in nearly two and a half decades. Kharge secured the top post defeating party MP Shashi Tharoor by a huge margin at the presidential election held last week.

Addressing party workers as the chief for the first time, Kharge said, “It’s an emotional moment for me as the son of a labourer, a common Congress worker, has taken over as chief of the Congress party. I thank you all for this honour.”

“I started this journey in 1969 as a block committee chief today you have taken it such heights. It’s my privilege and pride to take forward the legacy of Congress, a party which has been guided by the likes of Mahatama Gandhi and Jawaharlal Nehru,” Kharge said.

“As president, it will be my utmost duty to look after our workers. Together, we will build an India that will be enlightened, empowered and equal for every citizen. We will uphold the Constitution of this country, respect everyone’s rights and give equal opportunities, defeat those who spread hate, and fight inflation, unemployment and hunger,” the party president added.

Speaking about the upcoming elections in Himachal Pradesh and Gujarat, Kharge said that people want change in these states. “We will have to show our party’s strength in these elections. If we all work hard and with dedication we will achieve success. We are the soldiers of Mahatma Gandhi, we are not scared of anyone. When a Congress worker will get rid of his fear, then even the biggest of kingdoms will be defeated.”

He also spoke about the party’s Udaipur Declaration, saying that the proposal to give 50 per cent party posts to those below 50 years of age will be implemented.

Congratulating Kharge, former president Sonia Gandhi said, “Congress presidency was a huge responsibility. I tried to discharge to my duties with sincerity.” She added. “I extend my heartiest congratulations to the newly elected president Mallikarjun Kharge. Change is the rule of the world… Congress had faced a lot of difficulties earlier as well. But I’m sure we will overcome the problems.”

Chairman of the Congress Central Election Authority, Madhusudan Mistry, handed over the election certificate to Kharge in the presence of Sonia Gandhi, Rahul Gandhi and Priyanka Gandhi. Rahul is on a three-day break from his Bharat Jodo Yatra from October 24 to 26.

Less than hour after Kharge took charge, all members of the Congress Working Committee and general secretaries and in-charges of the AICC tendered their resignation to the party president.

Ahead of the event, on Wednesday morning, Kharge visited Rajghat in Delhi to pay tribute to Mahatma Gandhi. He also paid a visit to former prime minister Manmohan Singh at his residence.

Rajasthan Chief Minister Ashok Gehlot, who had bowed out of the presidential race, said today marked a “new beginning”. “Till the last minute, efforts were made to make Rahul Gandhi the party president as only he can challenge (Prime Minister Narendra) Modi and the government. Today is a new beginning. We congratulate Mallikarjun Kharge ji and will work to strengthen the party,” he was quoted as saying by news agency ANI.

Kharge’s appointment comes with its fair share of challenges. The veteran leader must transform the party to reconnect with the people and start winning elections again. As many as 11 states will go to polls before the 2024 Lok Sabha elections and the biggest test before Kharge will be to power the party to victory in at least the major states.