Kharge new Congress chief; he will decide my role: Rahul

Tharoor was among the first to reach Kharge’s residence to congratulate him. Outgoing Congress president Sonia Gandhi and her daughter and AICC general secretary Priyanka Gandhi Vadra too drove to Kharge’s 10, Rajaji Marg home to wish the party president-elect. 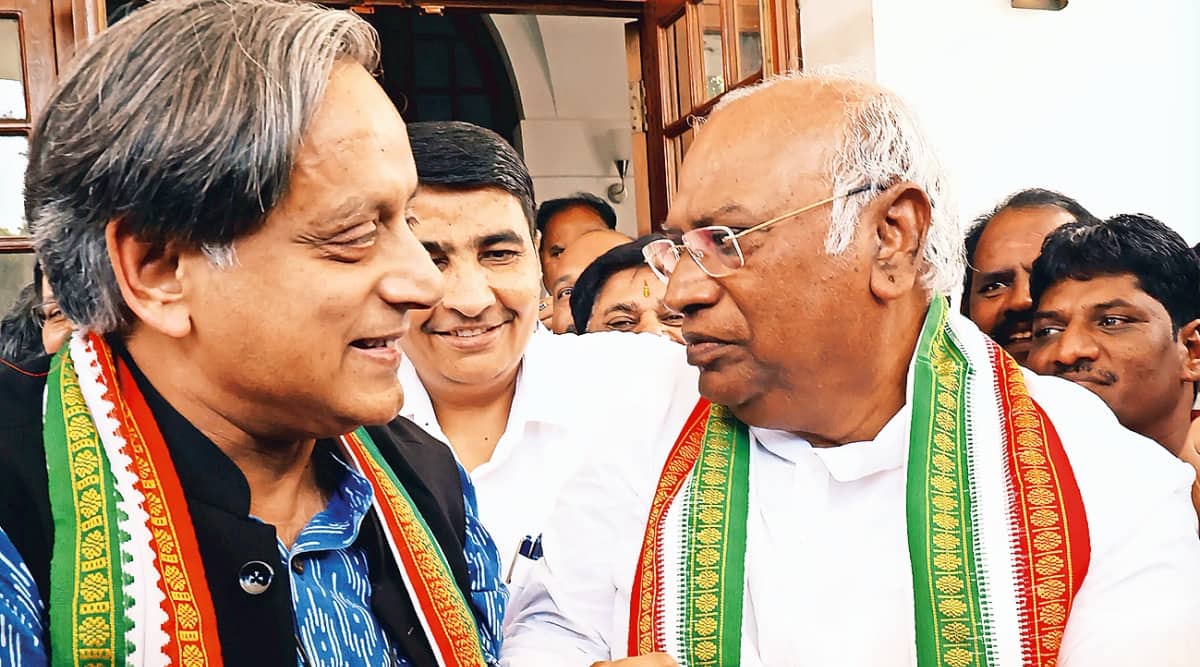 THE CONGRESS presidential election result on Wednesday was not unexpected, but did throw up a minor surprise. While Mallikarjun Kharge won 7,897 votes (84.14%) to become the first non-Gandhi party chief in 24 years, Shashi Tharoor surprised many by polling 1,072 votes (11.42%).

The over 11% vote share that Tharoor got reflects the vote for change in the party.

Tharoor was among the first to reach Kharge’s residence to congratulate him. Outgoing Congress president Sonia Gandhi and her daughter and AICC general secretary Priyanka Gandhi Vadra too drove to Kharge’s 10, Rajaji Marg home to wish the party president-elect.

Prime Minister Narendra Modi took to Twitter to wish Kharge. “May he have a fruitful tenure ahead,” he tweeted.

In Premium Now |Mallikarjun Kharge interview: ‘That issue (of G-23) is over… They are all supporting me’

Rahul Gandhi, who was in Andhra Pradesh on Wednesday for his Bharat Jodo Yatra, spoke to Kharge over phone. Asked what role he and his mother would play now, Rahul said: “…my role, of course I cannot comment on Congress president’s role… that is for Mr Kharge to comment on. I am very clear as far as my role is concerned. The Congress president will decide my role and how I am to be deployed”.

Several senior leaders, including Rajasthan Chief Minister Ashok Gehlot, reached Kharge’s residence to congratulate him. Rahul and Priyanka also tweeted congratulatory messages to Kharge but made no mention of Tharoor.

The 80-year-old veteran — the second leader from the Dalit community after Jagjivam Ram to become Congress president post-independence and the sixth leader from the South to helm the party in the last 75 years — has the onerous task of injecting fresh life into the grand old party and reviving it electorally. He will formally assume charge on October 26.

Road to 2024 |Congress & its missteps: Rajasthan latest in a series of own goals

On Wednesday, he made all the right noises after his victory. He thanked Sonia for providing leadership to the party, saying her tenure at the Congress helm will be etched in history, appealed to party workers and people to join Rahul’s ongoing yatra, and argued that the biggest problem that India is facing today is price rise, unemployment, widening gap between the rich and poor, and the hatred being spread by the government.

“We will continue to look to them (Sonia and Rahul) for their guidance,” said Kharge. “We all have to work together like workers. No one is superior, no one is inferior. We are all equal. Together, we have to fight against the attack on the Constitution and the conspiracy to destroy democracy. We have to fight against the fascist forces who, under the guise of communalism, are attacking every democratic institution of the country. We will strengthen the organisation and we will face these challenges,” he said.

He said the Modi government was all talk and no action. “Empty vessels make the most noise…it is our belief that this nation cannot be sacrificed on the whims and fancies of a dictator. Together, we have to defeat the destructive forces… All of us have to fight, from Parliament to the streets … You have reposed your trust in me… made a person who was born in a poor family the president of the Congress… I will meet your expectations,” he said.

As the results became clear, Tharoor congratulated Kharge and thanked the PCC delegates who had supported him. “The decision of the party delegates is final and I accept it humbly. It is a privilege to be a member of a party that allows its workers to choose their president,” he said in a statement. “Our new president is a party colleague and senior who brings ample leadership and experience to the table. Under his guidance, I am confident that we can all collectively take the party to new heights,” he added.

But the election was fought bitterly to the last day, with the Tharoor camp raising concerns several times. Even on the eve of counting, they wrote to Madhusudan Mistry, head of the party’s election authority, pointing out “extremely serious irregularities” in conducting the elections in Uttar Pradesh. They demanded that the votes from UP be deemed invalid.

Mistry, while announcing the results, said the charges levelled by the Tharoor camp have “no basis” and asserted that he would give a point-by-point reply.

Addressing a press conference, Tharoor, the Lok Sabha MP from Thiruvananthapuram, said he was never a candidate of dissent, but for change. He said Kharge’s victory was the victory of the Congress.

“It was never about one individual. I never wanted anything for me. My only wish is to see a strong Congress which is important for India’s strength. I fought the election in that spirit,” he said.

Asked whether the votes he received reflected dissent in the Congress cadre, he said: “I didn’t pitch myself as a candidate of dissent. I pitched myself as a candidate for change. And change not in the ideology or the direction of the party but in the manner in which we do our regular work. And I did feel that there is a need for opening up access to the workers in the party, creating more opportunities for discussion forums, implementing not only the declarations of the Udaipur chintan shivir but further… I hope Kharge… will look seriously at how all party workers can contribute to effective governance in the party so that we can mount an effective challenge to the BJP in the elections ahead.”