12 due to coronavirus but 580 deaths in April is double the number last year, govt to randomly test next of kin. 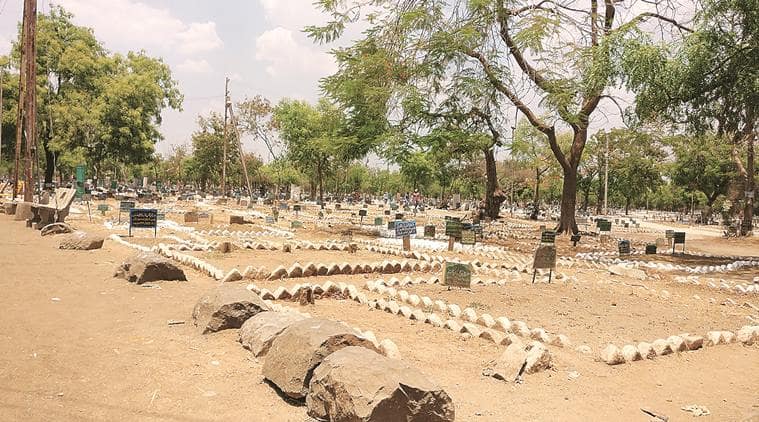 The number of official Covid deaths in Malegaon in Maharashtra is just 12 since the first case in early April but, overall, the number of deaths in this city has shown an unusual surge.

At 580 deaths for April, as per civic records obtained by The Indian Express, it’s almost twice the figure for the same month last year (277) and a 48 per cent jump over the number of deaths in March this year (see chart).

Hard pressed to explain this spike — some officials blame the locked-down private hospitals — the state government has decided to randomly test family members of all those who died after April 10.

This amid concerns that some of those who have died may have had Covid but went undetected — and could, possibly, have passed on the infection to close contacts.

Malegaon, in Nashik district, (population: 6 lakh) registered its first Covid case and death on April 8, and has since emerged as a hotspot with 229 cases and 12 deaths until Sunday. There has been no Covid death, as per official records, since April 27. 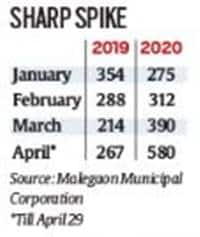 “On a normal day, we would have six or seven burials. Over the last three days, we have had over 30 each day,” said Raees Ahmed Ansari, administrator of the burial ground. In April, it saw as many as 457 burials — last April, the figure was just 140.

Officials said the number of cremations has remained relatively unchanged, 26 this April as compared to 22 last April. Of Malegaon’s population, an estimated 79 per cent are Muslim.

“There has been a surge in deaths in April. Without a thorough study it would be difficult to say if some of these deaths happened due to Covid-19. We have decided to randomly test family members of all those who died post April 10 to check if they are carrying an infection,” said Pankaj Ashiya, IAS, who oversees the Malegaon Emergency Operation Centre established after the Covid outbreak in the city.

The Indian Express spoke with several families of those who died in April, local doctors and health officials. Some attributed the surge to private hospitals shutting down or cutting off access to healthcare. Their fear, officials said, was exacerbated after the death of five medical practitioners, three of whom were confirmed Covid cases.

Said Malegaon’s Health Officer Govind Chaudhary: “We still have to study whether some of the deaths were because of Covid and went unreported. Malegaon initially faced a problem as a lot of private hospitals had shut down. People with diseases could not get access to timely treatment and medicines which led to the jump in deaths.”

State Health Minister Rajesh Tope who visited Malegaon earlier this week said that he observed people were not reporting to hospitals even if they had symptoms.

“Private hospitals have been asked to restart, the Collector has been ordered to ensure non-Covid patients are treated there. Fever clinics and mobile vans have also been started to ensure door to door survey is done,” he said.

On the ground, though, there are gaps in handling of suspected Covid cases.

An illustrative case is that of 60-year-old Shamim Bano Abdul Qayyum who complained of feeling uneasy last Saturday. Her son took her to a private hospital which referred her to a dedicated Covid centre where she was admitted as doctors felt she had symptoms.

“On Sunday (April 26), she called me to say she was the only woman in the entire ward at Mansoora Hospital surrounded by men and complained that she was not being given her regular diabetes medicine. On Monday morning, I received a call from a patient who was in an adjoining bed who told me that it looked like she had probably died in her sleep,” son Tauseef Qayyum said.

“My brother wrapped up her body. He also wrapped up two other bodies that died on the same day. My mother’s swab test was taken but we are still awaiting the result,” Tauseef said. Neither Tauseef nor his brothers have been tested yet.

“We are stretched thin and but are doing all we can with the resources we have. The high deaths in the city are a matter of concern but not all are victims of the virus. A lot of these deaths have happened because of the shutting down of services by private hospitals. We are now working overtime to ensure that private hospitals open up,” said Nitin Kapadnis, deputy commissioner of Malegaon Municipal Corporation (MMC) who is responsible for formulating a containment plan for the city.

“It is a densely packed community. We have 10-15 people staying in 100 to 150 sq ft of space. The conditions make social distancing very difficult. Also a large chunk of people are daily-wage earners. Lack of money and poor living conditions make them vulnerable,” Kapadnis said.