Maharashtra’s cane growers take a hit — this time, from too much water On July 27, the Panchganga, a major tributary of the Krishna River, breached its banks and submerged the entire sugarcane on Deepak Pomaji’s 12-acre holding near Kurundwad in Kolhapur district’s Shirol taluka. “My crop was under water for over a week. When I came to check after the floods receded, it had completely rotted top downwards. There’s nothing left to salvage,” sighs the 31-year-old.

Pomaji, who is also a Kurundwad Municipal Council member from the Nationalist Congress Party, had harvested 580 tonnes of cane in the 2018-19 season. Out of that, he had supplied 400 tonnes at Rs 2,905.99 per tonne to the Jawahar Shetkari and the balance at Rs 2,884.99/tonne to the Sharad cooperative sugar factory, both in the neighbouring Hatkanangale taluka of Kolhapur.

“My total revenue was over Rs 16.8 lakh last year. This year, it will be negative. Not only is my standing cane — an 18-month adsali planted last June-July on six acres and the rest under 12-month ratoon crops harvestable from October to January — totally gone, but I will have to spend money to clear the field now. It will cost Rs 10,000 per acre, but I cannot plant my next pre-seasonal cane in September-October without doing that,” he adds.

Between late July and the first week of August, Kolhapur, Sangli and Satara received torrential rains that caused unprecedented flooding. Maharashtra’s agriculture department has assessed the crop damage in the three southern districts at about 2.16 lakh hectares (lh): Kolhapur 1.05 lh, Sangli 0.73 lh and Satara 0.38 lh. Roughly 60% of it is under cane, with the crop in 65,000-70,000 hectares totally destroyed like that of Pomaji.

“The loss would be 100% for the crop that was submerged for more than 4 days. It will be less for the cane that had suffered only water-logging. The overall damage may be 35-40%,” says Manohar Gopal Joshi, managing director of the Jawahar Shetkari cooperative mill. The cane to this factory — Maharashtra’s biggest — comes from 23,480 hectares, some of it spilling into Belgaum district of northern Karnataka. According to Joshi, out of the total area, 20,229 hectares has been affected by the floods. In the 2018-19 season (October-September), the mill ran for 136 days, crushing 17.63 lakh tonnes (lt) of cane and producing 2.25 lt of sugar. “Cane availability will be at least 40% lower in the coming season and we may operate for hardly 100 days,” he reckons. 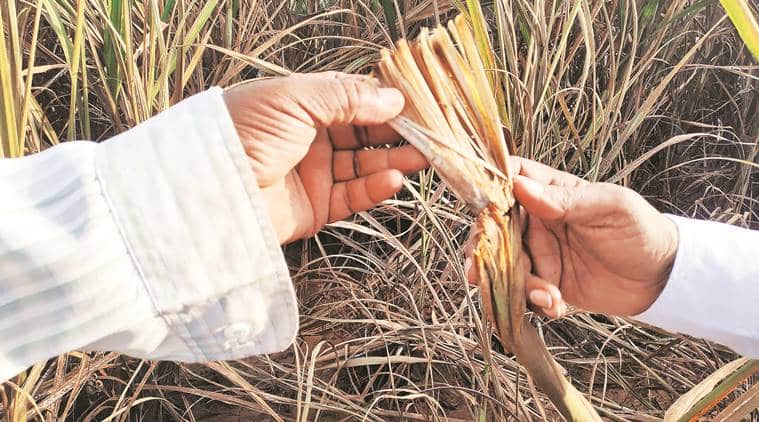 Mahadev V Patil, managing director of the Shree Datta cooperative sugar factory, also in Shirol, puts the loss from its 12,000 hectares cane area at 50%. “Our crushing season will not be even 100 days,” he claims.

Sukumar Sidnale, who realised around Rs 9 lakh from supplying 310 tonnes of cane to the Jawahar Shetkari mill in 2018-19, has lost his whole adsali crop that was 12 months old and would have matured towards December. Now, he wants to plant a 14-month pre-seasonal cane that would be ready by November 2020. “Even I get my field ready after clearing this crop that has gone rotten, will any bank extend me credit to undertake planting operations, which alone would cost 15,000-20,000 per acre?”, he asks.

On Monday, chief minister Devendra Fadnavis announced loan waiver for farmers whose crops were flood-affected up to an area up to one hectare (2.5 acres). This will not benefit either Pomaji or Sidnale. Worse, they cannot claim insurance. The Centre’s flagship Pradhan Mantri Fasal Bima Yojana scheme does not cover sugarcane, as it is grown under irrigated conditions and hence not considered to be a risky crop.

Maharashtra’s sugar industry this year has been buffeted by two crises.

In 2018-19, Maharashtra produced 107.21 lt of sugar, surpassing the previous season’s record of 107.10. For the 2019-20 season, the official projection of cane crushing is 580 lt and sugar output of 64 lt. These figures may have to be revised further downwards because of the latest floods.

Lower production from Maharashtra, however, is unlikely to result in any significant increase in sugar prices. The new season is set to open with all-time-high stocks of 145 lt, equivalent to 6.5 months’ domestic consumption. “Even if Maharashtra’s output halves, UP will produce at least 120 lt (from 118.22 lt of 2018-19). I also see production going up in Karnataka and Tamil Nadu, which will ensure 250 lt-plus at all-India level (against 329 lt in 2018-19). That, plus record opening stocks, will continue to keep prices low,” points out Mukesh Kuvadia, secretary of the Bombay Sugar Merchants’ Association.