Shiv Sena and BJP had contested 169 and 119 seats respectively in the 2009 assembly election. 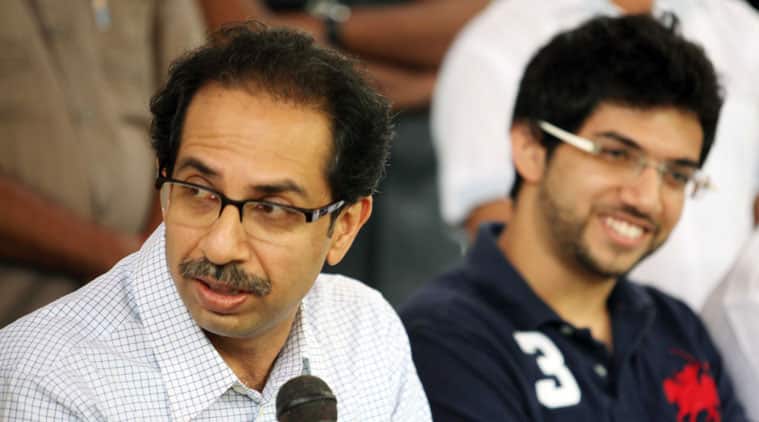 Uddhav also said since “talks are still on and till the decision on alliance is reached, I will not say anything negative”. (Source: Vasant Prabhu)

Further hardening his stand on seat- sharing with BJP, Shiv Sena president Uddhav Thackeray on Monday said he has rejected the saffron ally’s demand for contesting 135 seats in Maharashtra assembly polls and hinted at going it alone, saying “everything has an alternative”.

He, however, clarified that talks are still on to clinch a seat-sharing formula.

“They (BJP) offered a proposal under which they wanted to contest 135 seats and I have rejected it,” Uddhav, who had on Saturday asserted the next Chief Minister would be from “Shiv Sena only” if the saffron alliance came to power, told reporters.

Reflecting the growing tensions between the two oldest allies in the Centre’s ruling NDA, he said, “Everything has an alternative. I have conveyed it to BJP that I can’t go beyond a point (over the number of seats to contest).” He was asked whether Shiv Sena had kept open the option of going to the hustings alone.

Senior BJP leader and spokesman Rajiv Pratap Rudy had yesterday said his party had proposed that after allotting seats to smaller allies like RPI(A) and Swabhimani Shetkari Sanghatana of Raju Shetty, the two major constituents of ‘Mahayuti’ (grand alliance) should contest an equal number of 135 seats.

Shiv Sena and BJP had contested 169 and 119 seats respectively in the 2009 assembly election.

Uddhav also said since “talks are still on and till the decision on alliance is reached, I will not say anything negative”.

“I have nothing to say on BJP spokesman Madhav Bhandari’s comment that the talks have been stalled and BJP is comtemplating going alone. It is surprising that those who are not involved in the talks are saying discussions are not happening,” he said.

The ties between the two parties, Uddhav said, were 25- years-old and the “going has been good for Shiv Sena and BJP together. We should pull down this Congress-NCP government and save the people of Maharashtra”.

“We want all Hindutva forces to come together. If BJP says the party with more MLAs will get chief ministership, it should not forget that it was also decided that Sena will contest 171 and BJP 117 seats in the assembly. How can one remember only one part of the arrangement made by Balasaheb (Shiv Sena founder Bal Thackeray),” he said.

He said differences over the number of seats each alliance partner would contest were normal ahead of polls but the two parties have stuck together every time. “I hope this time too we are on the same side,” he said, adding the talks are expected to conclude in 2-3 days.

“BJP had its mission 272 for Lok Sabha polls, we have our mission 150 for the assembly election. Nobody should have any objection to it,” he said.

Uddhav said he was in touch with state BJP president Devendra Fadnavis and O P Mathur, incharge of party’s affairs in Maharashtra, over seat-sharing.

The Sena chief also denied having said anything against Prime Minister Narendra Modi at an event organised by a TV news channel on Saturday.

“I did not say Shiv Sena did not benefit from Modi. I did not make fun of anybody,” he said.

Uddhav had on Saturday said Shiv Sena’s contribution to NDA’s victory in Lok Sabha elections in Maharashtra cannot be ignored.

“Did the Modi wave show in Tamil Nadu, Punjab, Orissa and West Bengal? It depends on alliance partners as well. Modi is Prime Minister of our alliance,” he had said.

In the first public expression of his desire to become the Chief Minister, Uddhav had on Saturday said, “It is for the people to decide if they trust me. They will decide whom they want as the face (chief minister). I am not hankering after any post but will not shy away from responsibility either…But the face will be from Shiv Sena only.” “Talks with BJP for seat sharing are on. The seats which we will not contest will go to BJP,” he had said, apparently asserting Shiv Sena’s status of “senior partner” in the saffron coalition in Maharashtra despite dwindling strength.

Miffed at Uddhav’s statement, Bhandari had yesterday said, “The next government in Maharashtra will be formed under the leadership of BJP. Our national president (Amit Shah) had made this very clear while on his trip to Mumbai. And his decision is final.”