Accusing the BJP of “resorting to incite violence”, the Congress demanded a high-level probe into the issue. State BJP leaders, however, said he no longer holds any post in the party. 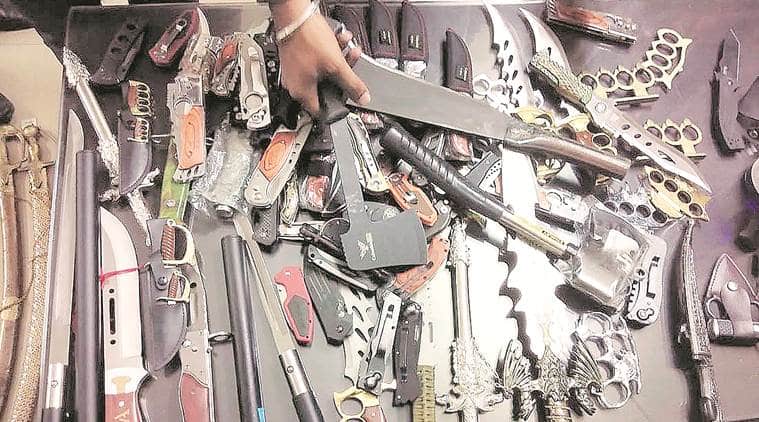 A local BJP leader attached to the party’s Dombivli city unit in Thane has been arrested for allegedly possessing and selling weapons illegally out of his clothing shop.

Dhananjay Kulkarni (49), vice-president of the Dombivli unit of the BJP, was arrested on Tuesday and 170 weapons seized from his shop, including 10 choppers, an airgun, 62 pistols, 38 button knives, an axe and other sharp weapons worth Rs 2 lakh, said the Thane crime branch. State BJP leaders, however, said he no longer holds any post in the party.

“Kulkarni owned a ground floor store at Arihant buildings in Tilak Nagar, Dombivali. The shop, Tapasya House of Fashion, was also a shop for illegal weapons, we had received information,” said a senior officer.

Kulkarni had allegedly bought the weapons from Crawford market in Mumbai and from dealers in Punjab and Rajasthan, police said. “We sent a decoy customer on Monday night, who confirmed the presence of illegal weapons in the shop. We raided the shop on Tuesday and arrested Kulkarni. He claims that he was selling the weapons because he wanted to make money quickly to pay off loans,” said an officer. Kulkarni allegedly taken a loan for his garment business and other personal loans.

Meanwhile, politics in Maharashtra heated up following the arms seizure, with the Opposition targeting CM Devendra Fadnavis and the BJP.

NCP state president Jayant Patil said, “We demand an explanation from the chief minister. What is the BJP planning to do with the use of such illegal weapons?” Taking another dig, Patil added, “There is no need for anti-social elements when BJP workers themselves are working like them.”

Accusing the BJP of “resorting to incite violence”, the Congress demanded a high-level probe into the issue. Party’s state spokesperson Sachin Sawant said, “The BJP senses defeat in the upcoming polls, and has begun resorting to religious polarisation and inciting violence. We are demanding an independent high-level inquiry in the matter.”
Sawant added: “Houses of all the BJP workers (in the state) should be checked.”

A local BJP source said: “Dhananjay Kulkarni has been selling antique weapons. It is used for public rallies or fancy dress competitions and rallies… It appears that some of his business rivals were trying to malign him.”

A senior BJP minister, requesting anonymity, said: “This has come to us as a shock. Those who have known Dhananjay Kulkarni informed me that he is a local worker who runs a gift shop. There has not been a single case against this person in the past.”

“The police are investigating the matter to see how the arms landed in the shop, what was the motive or was it planted. Could this be part of his collections? These and many more questions would be investigated thoroughly,” a source in the government said. When contacted, a BJP spokesperson refused to comment.

Kulkarni was sent to judicial custody on Tuesday. “We are trying to identify from where and when he managed to assemble the weapons. We are also tracking if people had already bought weapons from him,” said a senior officer.