A majority of people in this water-scarce region are averse to having toilets so close to where they live. “There is just no water. We travel long distances for drinking water. It is unthinkable for us to use it for cleaning toilets. No one in the village has really used the toilets since they were built,” says Kalusing Padvi. 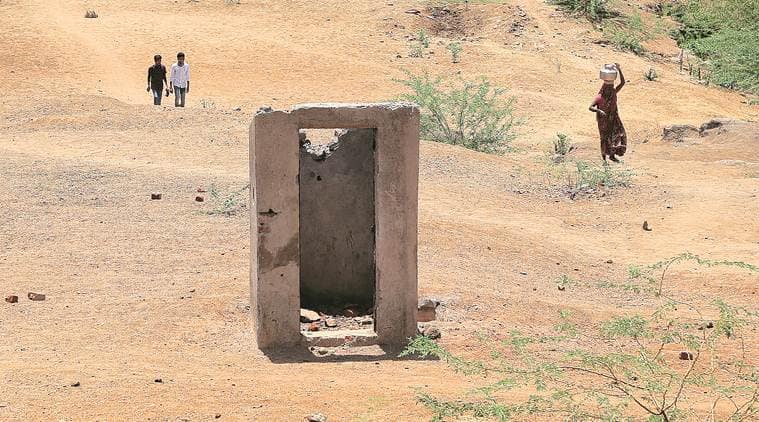 Nandurbar, Maharashtra’s most backward district, was declared open defecation free (ODF) under the government’s Swachh Bharat Mission (gramin) in April 2018. Under the government’s definition of ODF, it means every home in this tribal belt now has a toilet and no one defecates in the open.

But ground reality does not match the government’s claim. A year later, when The Indian Express travelled across 13 villages in Nandurbar’s Dhadgaon and Akkalkuwa tehsils, several homes still have no access to toilets. In some villages, the toilets that the government claims were constructed were never built.

Even the toilets that have been built are lying abandoned, while some are being used as storerooms for firewood, fodder or cooking utensils.

People are not complaining. A majority of people in this water-scarce region are averse to having toilets so close to where they live. “There is just no water. We travel long distances for drinking water. It is unthinkable for us to use it for cleaning toilets. No one in the village has really used the toilets since they were built,” says Kalusing Padvi, 45, a resident of Danel.

The tribal community here is yet to be convinced about the health benefits of toilets and believes defecating in the open in the forest, away from a water source, ensures a disease-free life.

But it is the gaps in the government’s claim that stand out. The government says all households in Danel have exclusive toilets, but Kalusing claims that “most of the families (in the village) still have no toilets”.

Local sarpanch Mamta Padvi, 22, admitted that “some families in Danel” were yet to be provided toilets. She also said that a neighbouring hamlet of Mandwa — where 200 other families live — has no toilets. “Officials did not survey them at all for the work. I do not know why,” she contends.

In Nandurbar, the government has claimed over 2.35 lakh toilets were constructed under SBM. While the Centre’s mission advocates that the beneficiaries construct the toilet facilities themselves, the state government made an exception for impoverished districts, where it permitted the work in remote villages to be undertaken through contractors appointed by the gram panchayats.

“Beneficiaries were asked to arrange for the transportation of the construction material. The contractor was supposed to do the rest. The government grant (Rs 12,000) was to be equally split between the beneficiary and the contractor. But till date, only 35 toilets have been completed. More than 150 families live in the village. Recently, I found out that the contractor had been paid for the construction of a toilet for my house though it has not been built. The same has happened in my brother’s case, too,” adds Kalusing.

Ideally, the grant is supposed to be released only after verification that the toilet construction had been completed, admits Sarika Barika, deputy chief officer, Water Supply and Sanitation, Nandurbar.

In Mukhdi, a neighbouring village, The Indian Express found some toilets have been built but are not wide enough to accommodate a fully grown-up individual.

“Most toilets were built in haste and are unusable. An inquiry must be ordered,” says Chetan Salve, an activist who works for tribal rights in the region. Mamta admitted that her own family does not use the toilet for defecation purposes. “Our hamlet (Kovli Dongarpada) faces an acute water shortage. We use the toilet during monsoon.”

In Chimalkhedi, a village affected by the Sardar Sarovar Dam project, the situation is no different. Noorji Vasave, 48, who is also a member of the local gram panchayat, said, “Most households (in our village) do not have toilets. The construction work is either incomplete or poorly executed in cases where they have been built. While we have raised official complaints, nothing has been done.”

He adds, “I know one case where construction material for building the toilet was diverted for the construction of a sidewall of a house. There are even cases where just the bare structure has been built without the toilet seat or soak pits.”

Villagers also state that toilets were being constructed in the area under submergence (of the dam project) and how these were washed away when the dam gates were opened during monsoon.

Siyaram Padvi, 40, another local, claims that disproportionate focus was being paid to the mission. “What is the use of the meaningless structures when there is no water supply?” he asks. “Several villagers are yet to be electrified. There is no road connectivity. People have to use boats to commute. I’d have rather focused on road construction, power supply and improved healthcare,” he adds.

Khumansing Padvi, the local sarpanch’s husband, admitted to receiving complaints from Chimalkhedi. “We are taking remedial action,” he says.

In Kunwarkhet, toilets are missing, but so are schools and basic health services. “There is a serious water scarcity in these areas. It is difficult to keep the toilets clean when people have limited access to water. Villagers feel that defecating away from where they live is a more sensible thing to do,” says Vijesing Walvi, 33

When contacted, Nandurbars MP Heena Gavit, who is also the chairman of the District Monitoring and Vigilance Committee, says, “There are several complaints in this regard. I’ll order an inquiry into it. During my constituency rounds, even I came across toilets that weren’t wide enough.”

Nandurbar Collector Balaji Manjule says, “I’ll order an urgent review in this regard.”

Rahul Sakore, director, Water Supply and Sanitation Support Organisation, said, “We are in the process of conducting a fresh verification of the toilet construction.” Last April, Chief Minister Devendra Fadnavis had declared Maharashtra 100 per cent ODF, with the government claiming that 56 lakh individual toilets were built between 2014 and 2018.

Sensex up 330 points on day of May F&O expiry